I saw a heavily camouflaged car on the road yesterday. I managed to get up close, but even then, I couldn't tell what it was. That's just the way it is sometimes – you don't always know what you're looking at. But there's no such uncertainty with this latest set of spy photos, though. This is very obviously a new Rolls-Royce.

And it's huge, most likely the replacement for the long-serving Phantom, and what we're seeing here is surely the long-wheelbase model. It will be joined by a short-wheelbase version, but you'll want to break out your best princess wave to say buh-bye to the slow-selling Phantom Coupe and Drophead convertible. Despite its immense size, our spies claim the Phantom's footprint shouldn't change much with the next-generation model. That said, it will be far, far lighter than the today's nearly 5,900-pound Phantom. Expect a lot of aluminum, and even some carbon fiber when the new sedan debuts.

It might end up lighter, but the new Phantom will still be easily identifiable as a Rolls. There's lots and lots of space behind the B-pillar, and like the current car, the C-pillar is expansive and feeds into a short, drooping rear deck. Up front, the current Phantom's overall style is set for a small evolution, with rectangular lights flanking a powerful, polished, rectangular grille.

As buyers of $400,000 luxury sedans can usually afford fuel, it shouldn't be a surprise to hear that Rolls will soldier on with a stout V12 engine under the hood. As for rumors of a plug-in hybrid model, if it happens, it won't show up until after the 12-cylinder car's debut. That glitzy event will likely come at a 2017 auto show. European shows like Geneva or Frankfurt are safe bets, but we wouldn't be surprised to see the new Phantom bow at an event more focused on the brand's exceptionally wealthy clientele, like Monterey or even Villa d'Este.

Check out the full round of spy images up top. 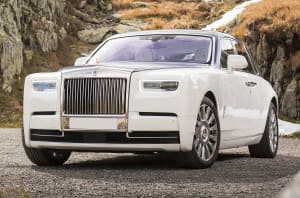 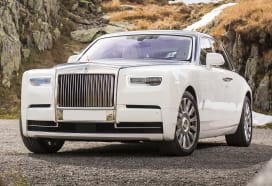