Ferrari Enzo split in half in crash could sell for millions

The 2004 Ferrari Enzo you see here is quite unlike any other. You see, back in 2006, tech entrepreneur Stefan Eriksson famously sliced this Enzo in half when he hit a pole along the Pacific Coast Highway while allegedly speeding at around 160 miles per hour (as you can see in the image below). And now you can bid to own it. RM Sotheby's will auction the infamous supercar in Paris on February 3. The supercar carries an estimate of between 1.5 million and 2 million euros ($1.6 million to $2.2 million at current rates).

Eriksson initially claimed that a buddy was driving when the accident happened but eventually came clean. The authorities charged Eriksson with nine offenses, including grand theft, drunk driving, embezzlement, and illegal gun possession. He was later sentenced to three years in prison. 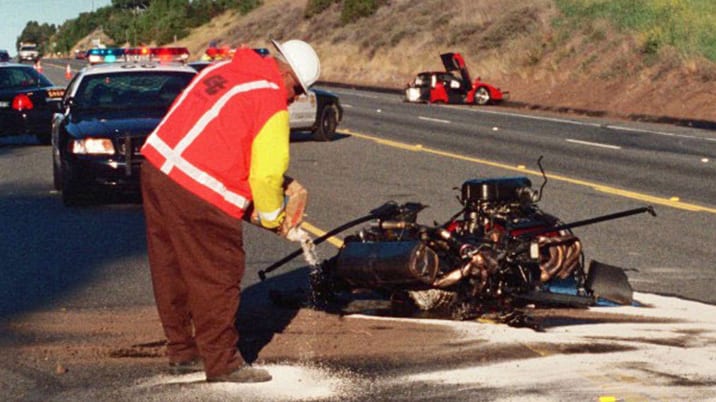 Despite the horrendous damage, Eriksson's Enzo has survived. According to RM Sotheby's auction description, the Ferrari Technical Assistance Service rebuilt the car and added satellite navigation, a Bose stereo, reverse camera, power windows, and a subtle carbon fiber rear spoiler. The team also repainted the exterior in a beautiful shade called Nero Daytona and installed a Rosso interior, which replaced the original combo of Rosso Corsa on the outside and Nero inside. The car has covered 2,500 kilometers (1,553 miles) and remained in Europe since it was rebuilt from the untimely accident. The car also comes certified by Ferrari Classiche to confirm its authenticity.

The Enzo is a special vehicle even without this one's great story, representing as it does a big leap forward for modern supercars. A 6.0-liter V12 with 660 horsepower sits behind the driver, and a six-speed sequential gearbox gets the power down. We can't wait to see what this interesting example brings at auction.

Following several years of lacklustre results in Formula 1, Ferrari once again found itself back on top in the early 2000s. With six Constructors' titles between 1999 and 2004 and another two World Championships in 2007 and 2008, the Scuderia was once again a force to be reckoned with.

It would be fitting that Ferrari's next limited-production supercar would utilise the best possible technology, engineering, and design, all pioneered within the crucible of motorsport. Countless hours were spent to achieve perfection in the car's design, allowing for the ideal balance of downforce and top speed. An all-new V-12 engine was specially developed for this new car and mated to a six-speed, sequential F1-style gearbox. Prolific use of carbon fibre ensured that the car would be as light as possible, in order to extract every possible ounce of performance.

Needless to say, the car's performance was incredible. With 660 horsepower on tap, it could reach 60 mph from a stop in just 3.6 seconds, leading to a top speed of 218 mph. Even more incredible was that it could grind to a halt from 80 mph in just 188 feet. The car was named the Enzo Ferrari, as then-chairman Luca di Montezemolo believed that it was a car that perfectly represented the founder's intensions for road-going automobiles; it is a road car that utilises the best possible technology directly derived from Ferrari's success on the racetrack.

The Enzo presented here, chassis 135564, is a 2004 model that was originally finished in Rosso Corsa (DS322) and fitted with seats trimmed in Nero (VM 8500) leather with four-point harnesses and instruments in Rosso. The car left the factory in Maranello in January of 2004 and was sold new to its first owner through Maranello Concessionaires in the U.K. on 12 February 2004. The car then made its way to the United States in 2006, where it was unfortunately damaged in a road accident.

The chassis was repaired and overhauled at the Ferrari Technical Assistance Service, where it was finished in a stunning colour combination of Nero Daytona over Rosso leather seats. The car was built with a handful of special features, including satellite navigation, a Bose stereo system, a reversing camera, power windows, and a rear spoiler in carbon fibre with 'Enzo script', adding a touch of luxury to the otherwise spartan interior. Currently, the car has only 2,500 kilometres on its odometer and has remained in Europe since its rebuild. Furthermore, the car has been fully blessed and certified by Ferrari Classiche, confirming its authenticity in every way. Today, it remains in virtually as-new condition and is ready to be enjoyed on the open road.

Presented here is a very unique Enzo with a fascinating array of special features that were unavailable on any other Enzo built. Fully certified by the Factory, this is perhaps the most exclusive Enzo available today. It is a unique Ferrari without peers and one to be cherished and appreciated.