All Proceeds Will Go To The National Multiple Sclerosis Society

Chris Bruce
We seldom hear about Jay Leno selling anything from his massive collection of vehicles, but it would seem he's willing to let something go when there's a good cause. The rare opportunity to own a truck with the denim-clad comedian's provenance comes soon when he auctions the first 2000 Ford F-150 Harley-Davidson at the Barrett-Jackson sale in Scottsdale, AZ. All of the proceeds will go to the National Multiple Sclerosis Society.

With just 2,000 miles, Jay's F-150 remains in great condition, and the black paint with a red pinstripe still shines like new. He says the pickup has fresh fluids, and the only change from stock is a new battery. Jay makes a case for buying the Ford in the latest video from Jay Leno's Garage. The comedian wanted something special when he bought the first Harley-Davidson F-150, so Ford dropped in the supercharged V8 with 360 horsepower and 440 pound-feet of torque from the SVT Lightning.

As an added bonus, the truck's new buyer takes delivery at Leno's garage and gets to take a tour, which, to some buyers, might be more of a draw than the actual truck. Will the combination of the big V8 and the celebrity tie-in be enough to bring in big bucks at Barrett-Jackson? We'll know soon enough – the auction is set to take place in just a few weeks on January 29. 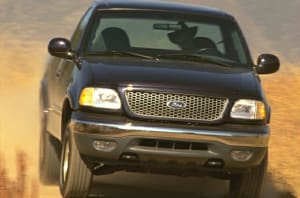