Autonomous cars are big at CES, but they leave consumers uneasy

Pete Bigelow
From BMW's iVision autonomous concept to reports of a potential Ford-Google collaboration to a dozen other heralded developments in Las Vegas this week, self-driving cars have become a major attraction at CES. Collectively, companies have touted autonomous cars as a means to delivering a safer, more fuel-efficient, more comfortable transportation experience.

While these vehicles have been more popular than Celine Dion in Las Vegas this week, they're getting a cooler reception from the rest of the country.

"Robot car advocates are putting a glitzy spin on their 'autonomous' technologies," said John Simpson, private director at nonprofit Consumer Watchdog, of the CES hype. "The fact is that while some emerging technologies may promote safety, self-driving robot cars are not remotely ready for deployment on public highways."


"The wave of technology coming into this sector has to be responded to in a timeframe that allows the best of it to get into the marketplace as soon as possible."

Automakers, suppliers and others would disagree. Building blocks for autonomous technology like adaptive cruise control and automated traffic-jam assist are already in use today. Nevada is one of four states that permits autonomous testing, and its public roads hosted the latest autonomous technology this weeks, as companies demonstrated their products during CES.

Among them: Delphi Automotive paired autonomous driving with vehicle-to-vehicle and vehicle-to-infrastructure communication systems. Many features of these features will debut on the 2017 Cadillac "Super Cruise" system this summer. Magna showed how an array of semi-autonomous features could be deployed off a single camera-based sensor. Ford said it would triple the size of its Fusion Hybrid autonomous research fleet this year, integrating new solid-state lidar sensors that create real-time 3D models of their surrounding environment, which CEO Mark Fields showcased. 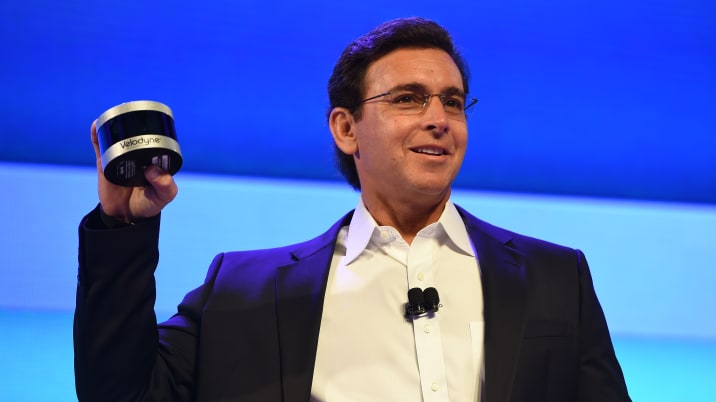 While those technologies have already reached public roads, a new survey shows many people share Simpson's consternation. Half of all US motorists regularly switch off driver-assistance systems like blind-spot monitoring or lane-keep assist because "they feel more confident in their own abilities to anticipate accidents or because they find the warnings annoying," according to a new report from automotive research firm SBD.

A more autonomous car won't necessarily mean a simpler experience for drivers, the report says, and automakers need to be more attentive to how consumers adjust to these semi-autonomous technologies and educate drivers on the limitations and nuances of their self-driving cars. SBD suggests a more gradual approach to the addition of self-driving features, so consumers could build trust in the technology.

Another new study suggests consumer trust in autonomous cars could be regional. Motorists were asked to rate their trust in self-driving technology on a scale of 1 to 10 by Gearheads.org. Residents of Colorado, Nevada, and New York trust the tech the most, while residents of the southern United States – Louisiana, Alabama, Mississippi – trust it the least.


"Robot car advocates are putting a glitzy spin on their 'autonomous' technologies."

Simpson, a chief critic of Google's vision of autonomous cars that don't contain steering wheels, would concur. He was among those who successfully lobbied California to issue regulations that require a driver remain behind the steering wheel capable of taking control of autonomobiles. The regulations, issued last month, also require those drivers to hold autonomous vehicle operator licenses. Those provisions, which in many ways defeat the purpose of using autonomous technology, left Google, which tests dozens of self-driving cars in the state, " gravely disappointed."

Until this point, California had been a leader in autonomous testing. In addition to Google, ten other companies have been approved for testing in the state. Whether California remains a leader or loses ground as an autonomous-testing hotbed may rest upon an upcoming decision from the US Department of Transportation, which is updating its two-and-a-half year-old guidelines on self-driving cars. Those guidelines could be issued within weeks.

There's a chance the federal government allows for more flexibility than California. Speaking in Las Vegas on Thursday, DOT Secretary Anthony Foxx said the department needed to amend its regulations to be more nimble and responsive to developing technologies.

"We're not agnostic on the fact the wave of technology coming into this sector has to be responded to in a timeframe that allows the best of it to get into the marketplace as soon as possible," he said. "So we are working through our agency on issues surrounding autonomous vehicles. We have regulations that say a human foot has to be on a pedal. We're looking at how to adjust our regulatory system to let these technologies take root."

At CES, those were welcome words. Beyond the Vegas tech sphere, autonomous cars remain a more uneasy prospect.