Early Prototype Shows That GM Thought This One Through

To say that there's a lot riding on the upcoming Chevy Bolt doesn't quite get at how important this all-electric vehicle could be for GM.

To say that there's a lot riding on the upcoming Chevy Bolt doesn't quite get at how important this all-electric vehicle could be for GM. We are entering a new phase for EVs in the US, and it's one where there will be more than one 200+ mile range electric model that will cost around $30,000-$35,000. The two obvious first entries are the Tesla Model 3 and the Bolt, but you can bet your Level 2 charger that Nissan will be joining the party as well, along with all sorts of as-yet-unannounced entries from other automakers. The main change that all of these longer-range EVs will bring is – potentially – to make plugging in your car a mainstream thing. And if the mainstream is in play, then there's money to be made, and you're going to need one heck of an EV to get people to pick your car instead of someone else's.

So, yeah, the Chevy Bolt could be a big deal. And today we not only got a bit more information about the car but we also got to go on a really short test drive in a prototype version outside of the Las Vegas Convention Center as part of CES 2016. The "drive" took place in a closed-off parking lot and my two laps through the cone course took less than three minutes, but I can still say that it looks like GM will be bringing a solid option to the marketplace soon.

If you shift into L, the regen becomes wonderfully strong.

One of the pleasant surprises in the Bolt prototype is the ability to drive with just one pedal. When in D, the Bolt coasts a bit, which is nice for highway driving, but if you shift into L, the regen becomes wonderfully strong. Strong enough that you don't need to engage the brakes at all if you're in standard city traffic, with lots of gentle stops and starts. If you want even more stopping power without getting the brakes involved, the Bolt also has the regen-on-demand feature that was introduced in the Cadillac ELR and works great in the second-gen Chevy Volt. When you pull the paddle on the left back side of the steering wheel, the electric motor instantly becomes a generator and the Bolt turns forward momentum into energy for the battery pack. It will even bring the car to a complete stop and then hold it when you release the paddle. This sort of variable regen capability is just what I like in an EV, and I think it makes sense – drivers new to the all-electric scene will likely appreciate it as well. 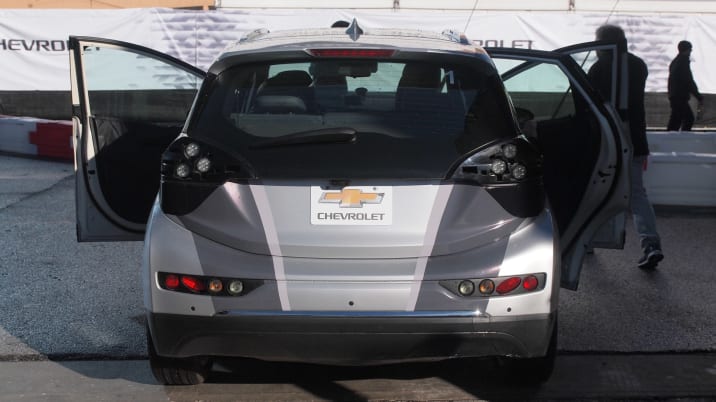 The Bolt was designed from the inside out to be a practical and affordable electric car for the mainstream.

And how about this for attention to detail? While the headlights and taillights in this prototype are not the ones that the production version will get ( see them here), the placement and function is indeed set in stone. If you take a closer look at the rear of the Bolt, you'll see that the full LED taillights are built into the hatch. This is cool because it makes the rear opening much larger than it would be if the lights were part of the frame. But, let's say you're carrying something bulky home from the thrift store and you have to drive with the rear open. Then the lights aren't exactly practical, are they? Thank goodness, then, that there are some extra incandescent lights along the bumper that only function if the tailgate is open. This design gives the car more practicality most of the time (who doesn't like a bigger opening?) while still being affordable. No one would give me the spreadsheet that shows the details of this calculation, of course, but the idea that the Bolt was designed from the inside out to be a practical and affordable electric car for the mainstream shines through.

GM representatives made clear that the Bolt was designed first and foremost with the mainstream in mind, becoming the "first mainstream electric vehicle that cracks the code" by combining long range, affordability, functionality, performance, and connectivity. 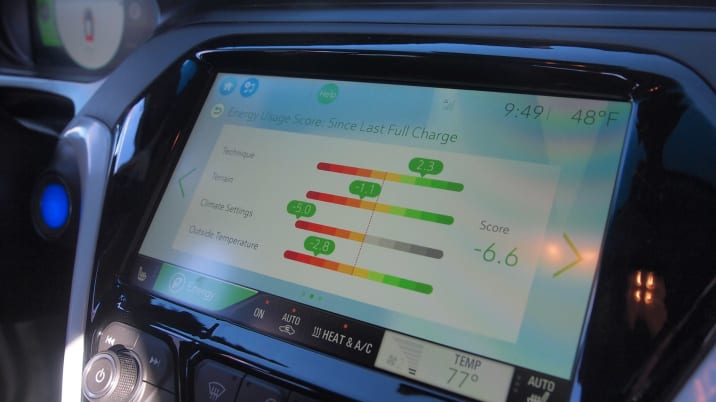 This might be the car that appeals to people who haven't yet cared about EVs.

What this means in practice can be seen in the center-mounted info screen. It's not only customizable so that you can put your most important data in the section of the screen that you find most suitable, it also has on-the-fly help buttons. Since people don't turn to instruction manuals the way they used to, the Bolt is designed to teach you how to understand things like how to control charging from your smartphone and what kWh-per-mile means and what parts of the car are using the most energy. Those of us who've driven a lot of plug-in vehicles probably don't think this is a big deal, but if GM wants to sell more Bolts than the roughly 4,000 Spark EVs it's sold in the US thus far, then you need to take away any perceived barrier you can.

We've already heard that GM wants to market the Bolt the " right way," and now that we've gotten our first hands-on with the car itself, the Bolt seems at first blush to have a lot going for it. This might be the one that appeals to people who don't yet care about EVs. Time will tell, of course, but the good news is that this time isn't that far away. The Bolt will go into production in late 2016.