Bringing The i Movement Into The Mainstream

View All Specs
Add a Review
BMW is no stranger to electrification. The company put the world on notice with the launch of its innovative i sub-brand. But the lessons learned from the i3 and i8 aren't limited to these small-volume cars. The more mainstream X5 xDrive40e impresses with lessons learned from i, all without compromising the SUV's character.

The combination of a 2.0-liter, turbocharged four-cylinder engine with an electric motor is good for 308 overall horsepower and 302 pound-feet of torque. Sure, 240 hp and 260 lb-ft come from the four-cylinder engine alone, but the electric motor – integrated within the ZF eight-speed automatic transmission's housing – chips in a maximum of 111 hp and 184 lb-ft of torque. The 9.2-kilowatt-hour lithium-ion battery can sock away enough electricity to drive up to 14 miles on a single charge and will recharge at your average 110-volt socket in about seven hours.

Of course, the battery pack and electric motor are a big weight penalty. At 5,220 pounds, the xDrive40e is 430 pounds heavier than the standard xDrive35i. Still, the gas-electric powertrain hustles this husky X5 40e to 60 miles per hour in just 6.5 seconds, less than half a second slower than the 35i. The stopwatch figures are complemented by the best fuel economy of any gas-powered X5, at 56 miles per gallon equivalent and 24 mpg combined. Only the diesel X5 xDrive35d is more efficient, at 27 mpg. But achieving top fuel economy in the 40e isn't as simple as going easy on the throttle. Perhaps more than any vehicle we've tested recently, understanding how all the X5's systems work together is crucial to eking out the most mpgs.

The xDrive40e's Drive Dynamics Control will be familiar to anyone that's driven a recent BMW. Eco Pro, Comfort (the default mode), and Sport make the same adjustments to the throttle response, steering weight, and dynamic damper firmness as they do in a standard X5. But in the xDrive40e, they also impact the way energy is recaptured.

Sport mode's aggressive energy recovery is the fastest way to recharge the battery on the go. When it's working, there's a sensation similar to gently stepping on the brakes, though you actually aren't doing anything – this is a familiar experience to the way most EVs use regenerative braking. Comfort mode reduces this effect, and in turn how much energy is recaptured. And contrary to what you might think, Eco Pro further reduces the regen, but limits the electrical draw from the HVAC and other systems.

But then there's the 40e's all-important eDrive button. A simple tap cycles through three different modes that control powertrain behavior. The default Auto eDrive mode leaves things in the hands of the computer, while Max eDrive locks the X5 into a full electric mode at speeds up to 75 miles per hour. Save mode forces the X5 to rely solely on the 2.0-liter gas engine in order for power. Put the DDC in Sport and the eDrive in Save, and you'll recharge the battery quickly while on the go, but not while going quickly.

We spend most of our freeway driving in Save mode with the DDC set to Comfort, rather than Sport. Sport's regen function is more aggressive, yes, but under constant throttle application (say, while traveling at 70 mph or above), there's no real chance to take advantage of it. On top of that, the eight-speed automatic transmission is loath to kick into top gear when driving in Sport. Of all the different driving combinations, we find Comfort/Save offers the best blend of fuel efficiency while achieving maximum energy recapture. 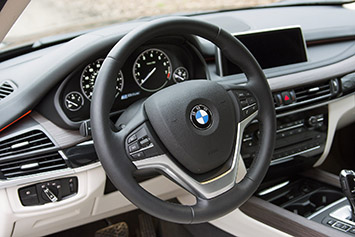 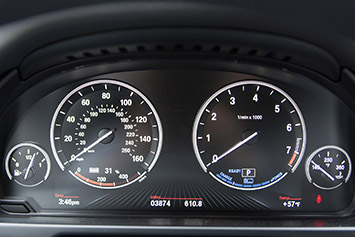 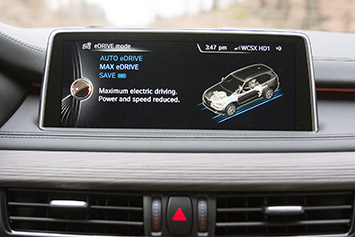 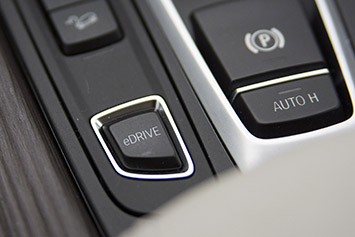 Taking advantage of every chance to recharge netted us 36 mpg during the first half of our week-long test.

Using Comfort/Save, a 25-mile freeway drive regenerates enough juice to cover about half a dozen miles in pure EV mode. On surface streets, we kick into Auto eDrive and Eco Pro, where the computer's invisible management of the gas-electric powertrain smoothly switches between the two systems as needed. Even with the battery basically empty, we stick to Auto eDrive, because the 2.0-liter turbo still gets a little bit of electric assistance off the line. Honestly, with no battery power, there's no benefit to limiting electrical draw with Eco Pro and the softer throttle response isn't worth the low regen. If traffic is light and we are maintaining a steady speed, we use Comfort to begin filling the battery again. Heavier traffic and regular stoplights demand the more aggressive recharging from Sport.

Here's the point: By blending this high-velocity charging and low-speed EV mode/recharging, we see an average of 26 mpg, two mpg above the X5's combined EPA rating. This isn't to say we didn't just plug in and recharge the battery the old-fashioned way. Taking advantage of every chance to recharge netted us 36 mpg during the first half of our week-long test. But as the video below explains, charging wasn't without its problems.

Even with the 5,220-pound curb weight, the X5 doesn't feel underpowered on surface streets or at freeway speeds.

On its own, the 2.0-liter, turbocharged four-cylinder is so good we'd support BMW building an X5 xDrive28i. The engine note is smooth and pleasant just like in the brand's other products, but even with the 5,220-pound curb weight, the X5 doesn't feel underpowered on surface streets or at freeway speeds.

The electric motor's instant torque makes for a sharp character off the line, but it wanes above 20 mph. Moreover, digging too deep into the throttle in pure EV mode depletes the battery at a hilariously quick rate – we lost nearly a third of the battery's energy over the course of a spirited, two-mile drive.

The two powerplants exist to complement each other. The electric motor's instant torque gives the X5 immediacy uncommon in big SUVs and by the time it begins running out of steam, the gas engine is well into the meat of its torque band. The two power sources play so nicely together at freeway speeds and around town that it's easy to forget you're driving a plug-in hybrid. There's no misbehavior when the drivetrain shifts from gas to electric or vice versa – it just feels like a regular X5. 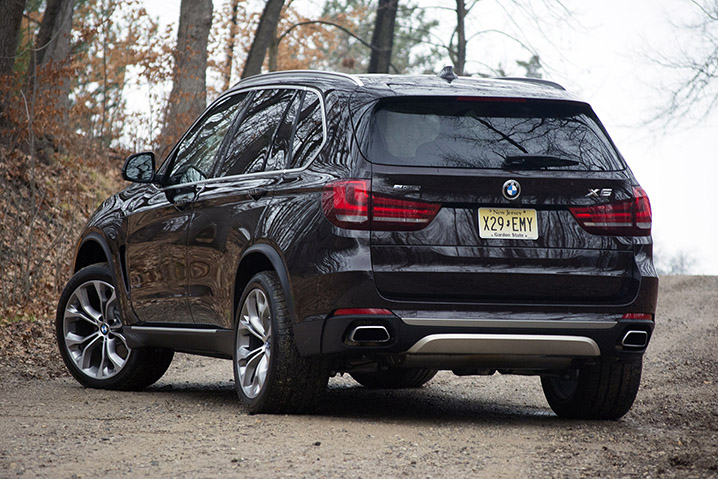 The X5 xDrive40e brings BMW's i lessons to the real world in a much more subtle, but ultimately enjoyable way.

Sadly, the same can't be said of the 40e's handling. Even though the adaptive dampers do an admirable job of managing the extra weight, you're abundantly aware of each pound as you hustle through curves. You can feel it in the steering, the way the car rolls, and the way the chassis talks to the driver. There's too much vertical motion in the primary ride. It's unwieldy – bouncing and hopping about – but the rear air suspension manages high-frequency imperfections well.

In the fully baked i brand products, you're always very aware that you're driving a sort of rolling science experiment – a demonstration of what BMW is ultimately capable of doing, rather than just a normal car. With its cohesive powertrain, confident performance, reasonable price, and impressive fuel economy, the xDrive40e brings those experiments to the real world in a much more subtle, but ultimately enjoyable way. 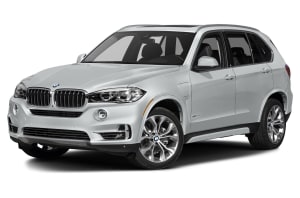