Improvements On CO2 Emissions Also Plateau, But It's Not All Bad News

Pete Bigelow
Fuel economy and emissions levels for the nation's automakers showed no improvement year over year, according to the latest numbers released by the Environmental Protection Agency.

That doesn't mean manufacturers are doing a bad job. On the contrary, although the numbers didn't budge, they remained at historic lows set one year earlier. The average fuel economy for a model year 2014 vehicle remained at 24.3 miles per gallon, an all-time high, while the average emissions rate remained 366 grams of carbon dioxide per mile.

Both numbers are the lowest recorded since the EPA began tracking the data in 1975, and both exceed the more stringent standards set in place by the regulatory agency three years ago. It's the third consecutive year that carmakers have beaten tightening federal thresholds for fuel economy. "They remain ahead of the game," Christopher Grundler, director of the Office of Transportation and Air Quality," tells Autoblog.

"The data is showing that a wisely conceived policy can unleash this kind of innovation." - Christopher Grundler


Though the numbers were stagnant between 2013 and 2014, the flat figures are a hiccup compared to a longer-term trend of improvement. (See graph below). Both fuel economy and emissions numbers have improved for eight of the past 10 years, according to a pair of reports released Wednesday – the EPA's annual " Fuel Economy Trends" and a " Manufacturer Performance Report" for the 2014 model year that examines greenhouse gas emissions standards.

Fresh off the global climate summit in Paris which concluded last week, the long term trend is what truly concerns Grundler. "That's precisely how we look at the world through this climate-change lens, and that's really what matters," he said. "What's going to happen over time?"

At least in the U.S., cheap gas prices make that a bigger question these days. For 2015, the EPA estimates fuel economy will improve to 24.7 miles per gallon while CO2 emissions fall to 360 grams per mile. Both numbers would be the best of all time, but they're based on production estimates automakers submitted to the EPA in early 2014. Since then, plummeting gas prices have affected consumers' choices in which new vehicles they purchase, enticing them away from smaller, more efficient cars and toward SUVs and pickups. That may mean the EPA's estimates are no longer attainable. 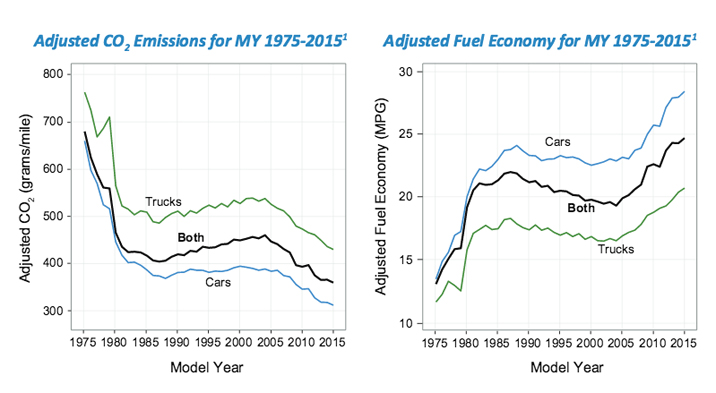 Gas prices will be a big variable in deciding whether there are retreats in the improvements automakers have made, but new technology may have an even greater impact.

"The way we designed this policy, we anticipated that things will change over time, preferences will change over time and fuel prices will fluctuate," Grundler said. "Remember that we're playing a long-term game, and any automaker who wishes to be relevant in a future low-carbon world has to adopt this mindset, and these standards do require year-over-year improvements regardless of the kind of vehicles we're talking about."

There's a big asterisk for one particular automaker in the EPA's report. For 2015 fuel-economy and emission projections, the watchdog agency used the numbers submitted by Volkswagen earlier this year, before its emissions cheating scandal broke.

Because the EPA's investigation into multiple violations of the Clean Air Act is still ongoing, the agency stuck with the data from the initial certification of the affected vehicles. EPA officials say the data will be revised in future reports should the investigation unearth different findings.