Bentley Continental has come a long way in 63 years

Noah Joseph
Ever wonder why Bentley calls its coupe the Continental? We'll give you a hint: it's not because it comes with orange juice and a breakfast roll. It's because the coupe was designed to traverse entire continents in speed and comfort. And it has been doing that for 63 years now. 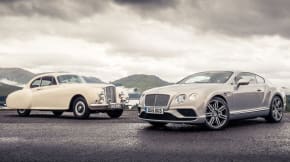 The fastest four-passenger vehicle of its day, the original Bentley R-Type Continental is considered to be the world's first grand tourer. The Continental was based on the R-Type saloon, retaining its 4.6-liter inline-six but replacing the four-door bodywork with an altogether more elegant, dynamic form. The two-door bodywork was crafted by H.J. Mulliner & Co, whose name still adorns Bentley's customization department, and whom parent Rolls-Royce favored over its usual Park Ward for its pioneering skills in lightweight construction. 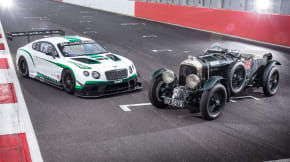 The result was a vehicle that could sweep along the highways constructed in post-war Europe with ease and grace at speeds up to 120 miles per hour. Of the 2,000+ R-Types that Bentley made in the early 1950s, only 208 were Continentals, making it one of the most sought-after Bentleys of all time – and one of the most beautiful. It's that spirit which the company aims to carry forth with its namesake, the latest Continental GT Speed, which stands as the fastest production model Bentley has ever offered.

Of course it's not just on the road where Bentley forged its reputation, but on the racetrack as well. That history stretches back to the famous Birkin Blower that won at Le Mans in 1930 straight through to the Continental GT3 that scored podium finishes at Paul Ricard and the Nürburgring this year. Watch the video above and scroll through the galleries below to see Bentleys old and new come together and demonstrate the heritage that they're always crowing about in Crewe.
Show full PR text
BENTLEY CONTINENTAL: EVOLUTION OF AN ICON

(Crewe, 16 December 2015) The Bentley Continental GT is one of the most iconic cars on the road today. The Continental name first entered the company's lexicon in 1952 with the R-Type Continental – arguably the world's first Grand Tourer.

With a top speed of 120 mph it was the fastest four-seater in the world at the time of its launch. Many of the 208 examples produced were coachbuilt by Mulliner – a name that is still closely associated with Bentley to this day.

With just three strokes of the designer's pen, the shape of the Continental comes to life – the striking power line, muscular rear haunches and swooping, fast roof line. These three elegant styling cues have remained a fundamental part of the Continental's DNA over six decades.

Today's Continental elegantly fulfils the same grand-touring brief as its forebear. With immense W12 power, a top speed of 206 mph and an unsurpassed ability to cross continents in total comfort, the Continental GT Speed is a truly extraordinary car.

GENERATIONS OF SPEED: BENTLEY CONTINENTAL GT3 AND THE BIRKIN 'BLOWER'

(Crewe, 3 December 2015) With the chequered flag set to fall on the 2015 motorsport season, Bentley is celebrating a remarkable run of results by bringing together two generations of racer – the Continental GT3 and legendary 4.5 Litre 'Blower'.

The current GT3 and its illustrious forebear from 1929 met at Silverstone in front of the British Racing Drivers' Club (BRDC), the motorsport organisation founded in 1928 by Bentley Boy and Le Mans winner, Dudley Benjafield.

They may be separated by more than eight decades but the two racing cars share Bentley's indefatigable passion for innovation, competition and, above all, speed.

Bentley Continental GT3 in 2015 – A Season to Remember

In just its second year of competition in GT racing, the Bentley motorsports programme has gone from strength to strength in 2015.

With teams competing on four continents, the Continental GT3 scored multiple pole positions, race wins, podiums and, at the end of the season, won the highly-competitive Blancpain Sprint Series and took the overall team title in the GT Asia Series.

Other highlights from the season include a best-ever finish at the 24 Hours of Spa, a four-car assault on the Nürburgring 24 Hours and successful completion of the grueling Bathurst 12 Hours.

Bentley's Director of Motorsport, Brian Gush, said: "As the team prepares for another exciting racing season in 2016, it's rewarding to look back on 2015 and to see how far we've come. We're racing on four continents in the world's largest and most competitive GT races and series. From Bathurst to Silverstone and Macau to Monterey, we're competing with the best that GT racing has to offer."

One of just five ever made for racing, the Blower was used by the original Bentley racing team – the Bentley Boys – of the late 1920s, and is still performing over eight decades later.

This year marks the 85th anniversary of the Woolf Barnato and Glen Kidston Le Mans victory in 1930. While the supercharged Blower wasn't the winning car that day, with Tim Birkin at the wheel its heroic performance embodies the true spirit of the vintage racing era.

In the 1930 race, Birkin and his Blower diced for the lead with Mercedes ace, Rudi Carracciola, passing him flat out down the Hunaudières straight with his nearside wheels on the grass. Birkin successfully pushed the Mercedes to breaking point, but also had to retire with six hours to go, and the race was eventually won by Barnato and Kidston in their Speed Six.

Featuring its original Vanden Plas Open Sports four-seat body, the Blower was described by Autocar magazine in September 1930 as having 'the appeal of immense power, linked with great docility'.

Joseph Dudley Benjafield had a lifelong passion for motorsports. He began racing after purchasing a Bentley 3 Litre in 1924. He had talent, and was quickly offered a drive in Bentley's company racer. He competed in the 24 Hours of Le Mans seven times, and won the event in 1927 with co-driver and fellow Bentley Boy, Sammy Davis.

Benjafield founded the BRDC in 1928. It began primarily as a socialising club for him and his fellow drivers, but by the time of its inauguration the 25 original members had devised a set of objectives for the club, including 'to extend hospitality to racing drivers from overseas'.

Today the BRDC is, arguably, the most exclusive club in motor racing. With a membership that numbers only 800, it is home to the most successful racing drivers from Great Britain and the Commonwealth. Those who have met the exacting entry criteria have achieved at the highest levels of the sport, or made a significant contribution to enable others to do so.