The Wayray Navion is a VR projector for your windshield

The Drive
You already know this, but phone tech changes far more quickly than anything carmakers can build into your next car. After all, whatever's in your 2016 Golf started development at least two years ago.
Case in point, news that a device called the WayRay, from a Swiss startup called Navion, can overlay augmented reality onto your windshield. Think live Google Street View. 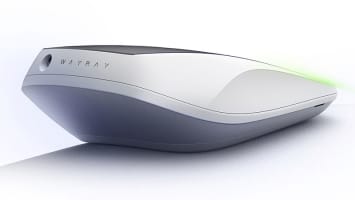 The tech holographically projects objects such as street signs and navigation cues out onto the street ahead of you. Yes, they're even exploring some of the tech that Waze supplies (i.e., augmented reality speed traps, projected onto the road ahead of you). Of course what you see is actually an optical illusion, because the objects simply appear to be in the distance when in fact they're bounced to your field of view onto a transparent film on the backside of the windscreen glass.

Hook the WayRay up to your phone via Bluetooth, and it also bounces texts and voicemail through, and you can interact with the device via voice and even gestures.

Interestingly, the interactive tech is coming backhandedly by way of none other than Tesla.

This article was written by Michael Frank. Read the rest at The Drive. This article excerpt is reprinted with permission.
X