Another major car show is almost upon us, and you know what that means. That's right, boys and girls – another pair of custom Jeeps. Far be it from us to complain, though, especially when the pair of SUVs debuting at the LA Auto Show this month aren't just for show. These will actually be offered to the public as new special editions.

In one corner we have the Jeep Grand Cherokee SRT Night edition, with all the brightwork replaced with black. The roof, rear spoiler, front grille bezels, pillars, and window surrounds are all done up in gloss black, while the wheels – custom 20-inch jobs – as well as the front appliqué and badging have all been given a satin black treatment. The interior, as you might have guessed, is also predominantly black, with black leather, black chrome bezels, and silver stitching. Buyers will be able to choose between deep red, silver, or dark gray exterior colors, but either way they'll be getting the same 6.4-liter V8 – all 475 horsepower and 470 pound-feet of it. 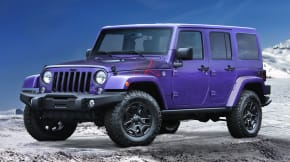 In the other corner is the Jeep Wrangler Backcountry. This one's based on the Wrangler Sahara and features a special off-road front bumper, powder-coated rear bumper, and the 17-inch wheels and rock rails from the Wrangler Rubicon. The interior features piano-black trim, leather and mesh seats, vinyl accents, nine-speaker Alpine sound system, and more. It'll be available in five colors – blue, black, white, gray or purple – with special graphics (because nothing says "backcountry" quite like neon pink decals on a purple Jeep) and a standard black (or optional body-colored) hardtop.

The Wrangler Backcountry will be reaching dealers around the same time as its live debut towards the end of this month. Don't expect to see the GC Night edition on the streets until early next year, though. Pricing for either has yet to be announced, but you can scope out the details of both in the press release below.
Show full PR text
Jeep® Introduces Two New Special-edition Models at the Los Angeles Auto Show

The Jeep Grand Cherokee SRT Night blends ultimate performance with a premium black appearance that includes a unique black roof and lightweight performance wheels. To celebrate the winter season, the Jeep Wrangler Backcountry delivers snow lovers a winter-themed Jeep that will get them wherever they want to go with a host of Wrangler's most capable off-road features.

The 2016 Jeep Wrangler Backcountry arrives in showrooms in late November. The Jeep Grand Cherokee SRT Night will be available in the first quarter of 2016.