Lamborghini Huracan gets incremental upgrades for 2016 Lamborghini is rolling out a series of upgrades for the Huracán. And minor as most of them may be, they'll likely only further the desire among enthusiasts to get behind the wheel. Chief among the enhancements is a new cylinder deactivation system system that drops from ten cylinders to five under light loads. Lamborghini refers to it as the first such system to be implemented on a naturally aspirated V10, though it should be noted that is corporate cousin – the Audi R8 – incorporates a similar setup. 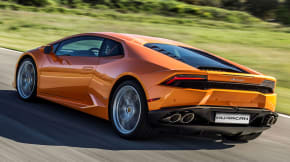 Apart from selectively shutting down one of its cylinder banks, the 2016 Huracán benefits from a retuned all-wheel-drive system that promises "a neutral and even more improved driving behavior." The rest principally comes down to trim, including matt-black air vents and more leather inside, along with available cruise control and other convenience features.

There's a new ten-speaker Sensonum audio system available, along with the global rollout of the optional sports exhaust, and an extension of the Ad Personal personalization catalog. Finally, buyers will also be able to show off even more than before with new carbon-fiber engine bay trim, a transparent cover, and even LED lighting.

Although the options stand to inflate the price significantly, the base price with all of the standard upgrades remains the same. They're being applied to both the coupe and the recently revealed Spyder for the new model year. The Raging Bull marque is also tipped to be preparing a new rear-drive version that's expected to be unveiled later this month in Los Angeles.

Sant'Agata Bolognese, 06 November 2015 -- Following its successful market introduction in 2014 the Lamborghini Huracán LP 610-4 is now available to order with a number of updates. The new contents focus on efficiency, drivability and luxury and are already available with the 2016 model year.

The price of the Huracán LP 610-4 remains unchanged at 169.500 Euros + tax. As standard, both the Huracán coupé and newly-launched Spyder version include cylinder deactivation to improve engine efficiency; the first time this function is included in a naturally aspirated V10 engine. When full engine capacity is not required, five of the ten cylinders are temporarily deactivated by switching off one cylinder bank. When the driver accelerates, the system switches back instantaneously to ten-cylinder mode, while being virtually impossible to detect by the driver. This feature reduces fuel consumption and CO2 to 283 g/km

A fine-tuning of the electronically controlled 4WD system provides a neutral and even more improved driving behavior, particularly in STRADA mode.

The offer in the color an trim of the Huracán has been significantly enlarged. Interior refinements as standard include leather to door handles and the upper parts of the center console. Air vents are now painted in exclusive matt black.

Lamborghini Ad Personam, the brand's customization program, has also added the availability of interior personalization, as well as exterior options including heritage colors and matt paints. The full Ad Personam program provides for owners wishing to further customize their cars to their unique personal tastes.

The options program has been further extended. New options available include Lamborghini's Sensonum audio system. The system delivers 390Watts RMS, with a ten-channel amplifier and a range of ten loudspeakers in hexagonal-shaped grilles and the exclusive Sensonum badge.

Lamborghini's optional sports exhaust system, which can be specified with astyle package for high gloss black tailpipes, is now available in all markets worldwide.

New LED lighting in the engine compartment can be combined with the optional transparent engine bonnet and carbon fiber engine compartment. Cruise Control can be specified, and a travel pack provides additional storage nets front and rear, an additional 12V lighter and cupholders.