Plus: Notes On SEMA, Takata, And The 2017 Honda Ridgeline Hyundai is creating a standalone luxury division that will use the Genesis name in an ambitious move that could bring the Korean automaker more profits, sales, and prestige.

The Genesis division launches in December in Korea, followed by a rollout in other markets, including the United States in 2016. The brand will have six models by 2020. They will all start with a "G" for Genesis, then have a number, like 70, 80, or 90 to represent their segment, Hyundai said.

The vehicles will also get more upscale design to differentiate them from other Hyundais. Luc Donckerwolke, a veteran Volkswagen Group designer who joined Hyundai earlier this year, will oversee a new Prestige Design unit at the company. The current winged Genesis emblem will be restyled and worn by all of the brand's luxury vehicles. Hyundai says its new division will focus on technology, customer service, and will have "refined performance character." The current Genesis sedan offers a 5.0-liter V8 that makes 420 horsepower.

Naturally, Hyundai is optimistic for its new Genesis brand, but it will face immediate challenges as it enters a crowded and competitive market with a long list of entrenched competitors. Brands with storied histories like Cadillac and Lincoln have struggled recently, and even top-selling brands Mercedes-Benz, BMW, and Lexus aren't immune to potential troubles. Rumors have persisted that Hyundai harbored luxury ambitions since it first launched the Genesis sedan in 2008.
OTHER NEWS & NOTES 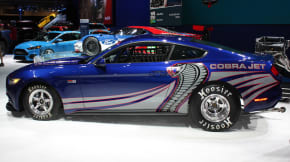 Further evidence of the auto industry's momentum was on display at the SEMA show this week as carmakers and tuners again turned out in full force. The Ford Cobra Jet Mustang, a Chevy Silverado customized by Kid Rock, and a Kia Forte Koup Mud Bogger were among the prominent displays. The show attracts more than 140,000 people per year, including 2,400 exhibitors, who come to buy and sell products. SEMA is a barometer for customization trends in the aftermarket, a key reason automakers attend. "They represent things we are thinking about and want to get some exposure," Mopar boss Pietro Gorlier said. 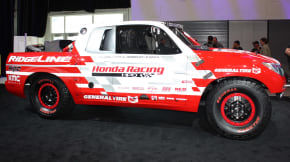 In other SEMA news, Honda previewed the next generation of its Ridgeline pickup at the show with a race-prepped vehicle that will compete in the Score Baja 1000 this year. The hood, side profile, roof, and front fascia offer hints of what the new truck will look like in production trim. Art St. Cyr, president of Honda Performance Development, called the SEMA display a "mockup" for what's to come and sees opportunity in the midsize truck segment. "We expect the market to grow," he told Autoblog. "It works well for the Honda philosophy of what we do." The 2017 Ridgeline arrives at dealers in the first half of next year. 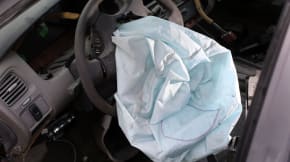 The National Highway Traffic Safety Administration fined airbag supplier Takata $70 million for failing to recall its faulty airbags in a timely manner and evading NHTSA's investigations. The penalty is part of an agreement with the feds that imposes "unprecedented oversight" on Takata for the next five years. The fine could reach $200 million if Takata doesn't live up to the terms of the deal. Meanwhile, Honda announced it will not use Takata's front airbag inflators in future vehicles, and other automakers were reportedly considering similar moves.