Initially launched in 2012 as the JX35 and rebadged in the brand's new nomenclature as the QX60 in 2013, Infiniti's three-row crossover is due for a facelift next year. And that's just what you're looking at here in this latest gallery of spy shots.

Captured while undergoing testing here in the United States, the 2016 Infiniti QX60 is slated to benefit from revised styling front and rear. That means a new grille and headlights stylistically drawn from those on the QX50 and QX80, as well as a reshaped rear end with new taillights. The design changes ought to help further differentiate the QX60 from its more commonplace counterpart, the Nissan Pathfinder, on which it is based. Nissan dealers, after all, charge a good $13k less for their version than Infiniti dealers get for theirs, and customers want their premium wheels to look the part. And in the process, the updates aim to help the QX60 compete with rivals like the Acura MDX and Buick Enclave.

A fresh set of wheels is almost a foregone conclusion whenever an automaker is trying to spruce up one of its models. And we can expect some updated equipment and revised materials inside as well. We wouldn't expect much in the way of mechanical upgrades under the hood. Infiniti recently recalibrated the continuously variable transmission for improved performance and refinement for 2015. Sources point towards an unveiling before year's end – which likely means the upcoming Los Angeles Auto Show later this month – before sales commence early in the new year. 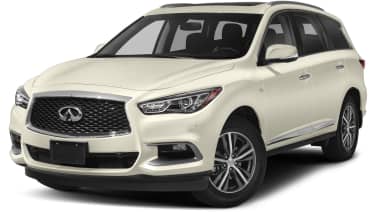 $5,931 - $7,963 Nat'l avg. savings off MSRP
See Local Pricing
I'm not in the market for a vehicle at this time. Please move this suggestion to the side for 30 days.
Huge Savings