As previously reported, BMW is going ahead with a second-generation 5 Series Gran Turismo, no matter how silly the first generation of the sedan-cum-hatchback-cum-wagon may be. These are our first spy photos of that new vehicle, which is still on track for a late 2016 debut.

Perhaps the best thing we can say about the next 5GT is that it won't be quite so hunchbacked. The seven images provided by our spy photographer show a car with a profile that's far more svelte than the bulbous entry on offer today. The roofline, in particular, is more aggressively raked at the rear and there's a proper, distinguished rear deck, as well. Part of what makes today's 5 Series GT look so bizarre is the combination of an almost fastback tail with a very tall decklid height. While the updated model still features that high rear – you can actually see where the beltline kicks up at the rear quarter window – the fastback styling has been softened so that it doesn't look quite so bizarre.

The new Gran Turismo should also be a much better steer than the 5GT currently on offer. Our spies report that this next-gen model will be significantly lighter, which is something we can always get behind. Engine options will consist of gas, diesel, hybrid, and plug-in hybrid, as is the trend, although specifics aren't quite available yet.

Spitballing, though, it's almost a guarantee that the next 5GT will share the 5 Series sedan's engine lineup. Expect a number of carryover engines there – 2.0-liter turbo four, 3.0-liter turbo six, 4.4-liter twin-turbo V8, and 3.0-liter diesel, probably – along with a plug-in hybrid option, although nothing's been confirmed so far. With an official debut slated for late next year, either Paris or Los Angeles seem like a logical debut location. 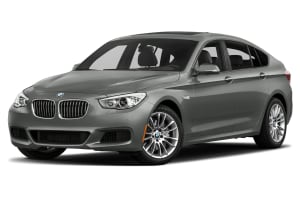