The Nissan IDS concept from this year's Tokyo Motor Show is a thinly veiled preview of the next Nissan Leaf, at least from a styling perspective. As with most concepts, the IDS has a few features that are way off into the future. Like a cockpit that folds away the steering wheel when you switch to piloted driving mode. Or a message display that broadcasts your next move to other pedestrians and other motorists.

So how much do we know about the upcoming Leaf? We took a tour of Nissan's Advanced Technical Center in Japan and learned about a few things in the works. Piecing together those hints, making some educated guesses from the IDS, and looking at previous Nissan statements we can speculate on a few things that we'll see on the second-generation of the world's best-selling EV. Let's begin.

How Far Will It Go On A Charge?

The IDS concept uses a 60-kWh battery, and coincidentally Nissan showed us a battery in development of the same capacity. The new pack fits in the same footprint as the current Leaf pack, which is a dead giveaway that it's being considered for production. The higher energy comes from two areas: chemistry and packaging. These battery cells use a new nickel-manganese-cobalt chemistry for the anode, compared to the current manganese and nickel formulation. They also use a revised electrolyte that suppresses lithium corrosion and improves the decay rate. In other words, the new batteries last longer.

In the current Leaf the batteries are made of four cells each. The advanced technology battery uses stacks of nine and 27 cells. The greater cell density means less resistance to taking a charge. Combined with the capability for 100-kW fast charging this new battery pack should be able to charge in half the time. 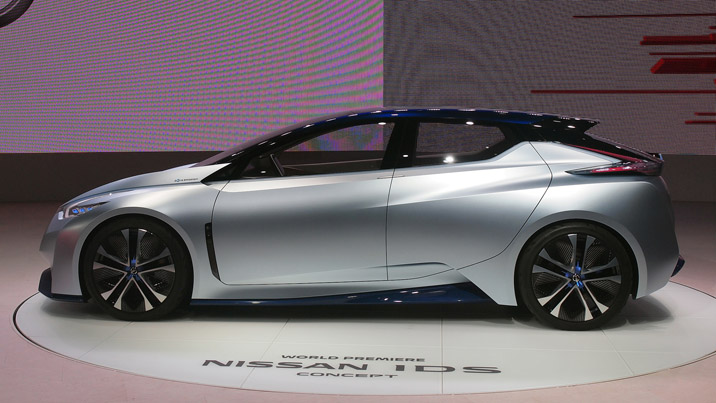 Nissan says the current battery pack should be capable of 500 kilometers of range on the Japanese test, but we hear it could be closer to 600 km. Extrapolate the numbers from the current Leaf, rated at 107 miles on the EPA test, and we assume the next Leaf will easily do 200 miles on a charge. Add in better aerodynamics and other improvements and we could see the Leaf even push past 225 miles of range.

That distance assumes the 60-kWh battery pack will be used in production. Nissan is confident that the cost per kilowatt hour of the advanced batteries will be lower than current technology, but the overall cost could still go up. To keep the sticker price affordable, we predict a variety of range options, such as a standard 30-kWh pack, the mondo 60-kWh at the top of the lineup, and an intermediate battery size in between.


This new battery pack should be able to charge in half the time, and we assume the next Leaf will easily do 200 miles on a charge.

Will It Be Bigger?

Yes, but not by much. Start with the dimensions of the IDS concept: 176.0 inches long, 110.2-inch wheelbase, and 74.0-inch width. That's an inch longer, about four more in the wheelbase and width. It's the kind of small increases that are typical when a car evolves into a new generation. The battery pack should be about the same size and continue to be mounted in the floor, so the dimensional gains will mean modest improvements in interior volume.

Will it Drive Itself?

Sort of, and depending on where you live. The IDS concept goes so far as to park away the steering mechanism when it switches to piloted driving. This is at odds with Nissan's continued insistence that the driver should always be able to take the wheel, but we can chalk that up to the utopian ideal of a self-driving future.

Nissan's timeline on autonomous driving will happen in three stages. In 2016 it will offer single-lane highway cruising with traffic-jam assist. Then by 2018 it will add lane-changing capability to the highway. Finally in 2020 it will be able to navigate city streets and intersections. A remote parking system will also become part of this system at some point.

That means the next-generation Leaf will debut with hands-free highway driving and might see updates a few years later. But that also depends on where Nissan will offer piloted driving. At this year's Tokyo show, Ghosn reiterated that the rollout of these features will depend on what lawmakers will allow, which could delay getting these cars in (or out of) the hands of consumers. 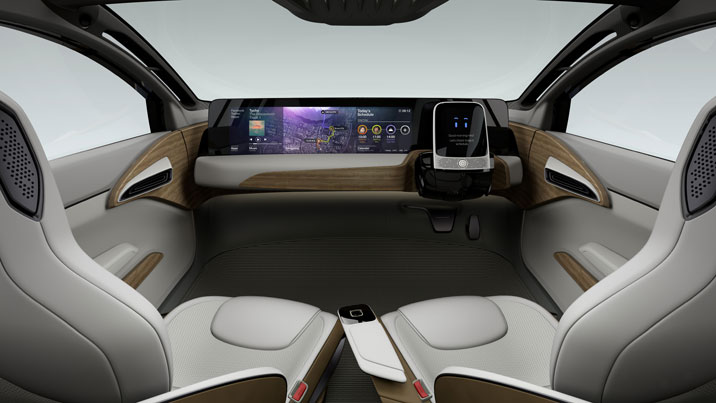 What About Wireless Charging?

Imagine pulling into your garage, turning your Leaf off, and coming back hours later with more range. That's the promise of wireless charging, where an induction loop between the floor and the car sends electrons to the battery. (It works on the same principles as Qi wireless charging on some mobile phones.) Nissan demonstrated a wireless charging pad that operates at 7 kW and approximately 85 percent efficiency, which gives an equivalent charging rate to a Level 2, 240-volt charger. And current aftermarket wireless charging systems are already on the market. It's likely that Nissan will offer wireless charging as an option, at least in some markets.


Don't expect the next Leaf to be Nissan's version of the BMW i3, but we could see some advanced composites used in some areas.

Will it Be Made of Carbon Fiber?

Don't expect the next Leaf to be Nissan's version of the BMW i3, but we could see some advanced composites used in some areas. Of particular interest was a carbon-fiber reinforced plastic A-pillar design that's half the cross sectional area as the current steel pillar but lighter and stronger. The extra appeal of using composites here is that a skinnier pillar can virtually eliminate forward blind spots. That's a marketable way to increase safety.

In a hypothetical situation, a carbon-fiber body would offset the added heft of a larger battery and autonomous driving components to result in a 10-percent decrease in total weight. Nissan wouldn't get into any specifics on cost or manufacturing of carbon fiber. Our best guess is maybe we'll see it in areas that add an extra benefit, like the A-pillar, but it's more likely that this won't happen until the third-generation Leaf, if at all.

When is the Next Leaf Coming?

There is no official announcement. The original Leaf is now in its fifth model year. Even with a new upgraded battery pack, the car is approaching the end of its life cycle. Combine that with Nissan CEO Carlos Ghosn's statement earlier this year that "Obviously we will be competing," when asked about the 200-mile range of the upcoming Chevrolet Bolt. The Bolt is rumored to arrive at the end of 2016 at the earliest, and our sources at Nissan say the timing of the Leaf will be close. We think you'll be able to buy one in 2017, possibly as a 2018 model year.