The Attitude? Positive And Ready For The Challenge The 2015 edition of the annual AltCar Expo in Santa Monica, CA in September was a relatively quiet affair. Attendance felt light compared to previous years. But that didn't mean there wasn't something happening that might have just as big an impact on the plug-in scene as anything that's ever happened in previous years at the Santa Monica Convention Center.

I say this because of what GM's Shad Balch told me about Chevy's plans to market the upcoming Bolt electric car. This is GM's next-gen electric vehicle, which will have a roughly 200-mile range and may cost about $30,000 after tax incentives ( maybe). To say he's excited to start selling this car is an understatement.

Set aside the obvious challenge Chevy will have with cars named both the Volt and the Bolt, especially when some languages exchange the pronunciation of the letters B and V. Set aside the fact that, for now, Balch is dealing with his own company actively advertising against the product he's trying to get people excited about. Balch, GM's manager of new product and public policy communications, is tremendously positive about the Bolt's chances in the marketplace when it arrives in 2017 or 2018. 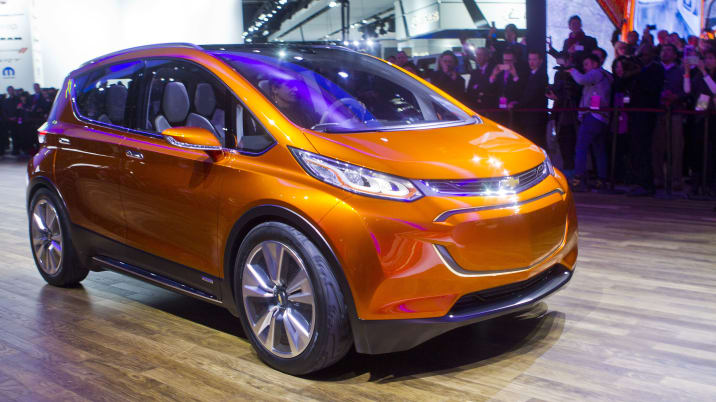 "Driving an EV is, in every proof point, better than a gas-powered car, except for charging." - Shad Balch

AltCar and the concurrent National Drive Electric Week represented the Bolt's West Coast debut, and Balch told me that the car's arrival in California shows how "Detroit recognized that they need to send it out to their number one market." The car's appearance outside of the Motor City was "The most encouraging part for us out here, being in the market ... to be able to explain that we are committed to marketing this car the right way. ... We're trying to make that known as much as possible, because that is the number one criticism that we hear. That's why events like these are so important, because we can't wrap up into a 30-second spot what these cars are capable of. I can't even explain it to you in 10 minutes what it's like. But the thing is, driving an EV is, in every proof point, better than a gas-powered car, except for charging."

Now, there's a fairly decent chance that GM will hit the 250,000-vehicle limit for the $7,500 federal tax incentive right about when the Bolt comes to market, so I had to ask how the Bolt gets marketed if the price tag jumps up a few thousand dollars. Balch was straightforward. "Well, we would sell fewer cars," he said. "It's pure and simple. ... We need the incentives to remain. We know that they're critical. Unlike any of the other car companies, we have data that shows that, because when the Volt first came out, it didn't qualify for [California state] incentives. When it did qualify on top of the federal incentive with the state incentive, we sold five times as many."


"It's very safe to assume that this car is going to be here sooner rather than later."

Balch said that GM is working with regulators and policy makers to show them this data and is making the case that the incentives need to be extended and maybe expanded. Having a point-of-sale cost reduction instead of a tax rebate would help too, he said. "It's very difficult to keep everybody up to speed and for dealers to even know what the incentives currently are. It ebbs and flows. I mean here in California, we've had to have our dealers get up to speed on IOUs from the state, to all of the sudden, the cash is back so we can give you a rebate check here. We need continuity. We need a consistent policy to incentivize these cars to be purchased, at the volume and at the level that will help us sell and meet [the efficiency] standards. Because what we do know, and what we're hearing from the regulators is that they would agree that this needs to be a market-based approach."

As for when the Bolt will actually be available to buy, Balch said that after the positive response to the concept at the Detroit Auto Show earlier this year, "GM leadership has essentially fast-tracked this car into production." There was an announcement that the Bolt would be built at the Orion Assembly facility near Detroit and there are Bolt mules out testing. "It's very safe to assume that this car is going to be here sooner rather than later," Balch said. "We've also committed that it's going to be a 50-state vehicle at launch. That's to show our commitment to the technology. Our hope is that it becomes a high-volume-selling car, and that it's not just for the coasts, it's not just for a certain income level, but it is a long-range EV that anybody can get themselves into. ... [This is] a good alternative to the luxury long-range EVs that are available now. It's something that people can see themselves actually affording to get into. That's the message from this car."