How Much Data Do They Need? A Lot

Eric Tegler
In Formula 1 you need more of everything. More speed, more grip, more hospitality, more money. And you need data, reams and reams of data.

The Mercedes-AMG Formula 1 team – the guys with the silver cars driven by 2015 F1 champion Lewis Hamilton and his teammate Nico Rosberg – need so much information that they've teamed with Qualcomm to wirelessly upload thermal imaging data of its tires.


During a typical race weekend Mercedes's two racecars will generate approximately half a terabyte of data.

Live telemetry has been a feature of Formula 1 for 20 years, though there are more restrictions on it than in the past. (In the days leading up to last weekend's United States Grand Prix in Texas, Formula 1 major domo Bernie Ecclestone said that F1 needs to cease being an engineering war and return more responsibility to the drivers.) Nevertheless, F1 teams gather vast amounts of data during a race weekend, particularly in practice sessions during which restrictions on what they can upload from cars – from engine/power unit parameters to aerodynamic loads – are less prohibitive.

For example, during a typical race weekend Mercedes's two racecars will generate approximately half a terabyte of data. Mercedes F1 technical director Paddy Lowe points out that the standard telemetry system simply doesn't have the bandwidth to handle the thermal tire imaging data that the onboard thermal cameras generate.

Why do you want a thermal video of the tires? Because it tells the engineers and drivers precisely how much temperature there is across the surface of a tire during a lap, in corners and on the straights. It also indicates how quickly the tires come up to temperature and when they potentially overheat. Understanding the temperature variations allows the team to set the cars up optimally for grip and tire life during a stint. 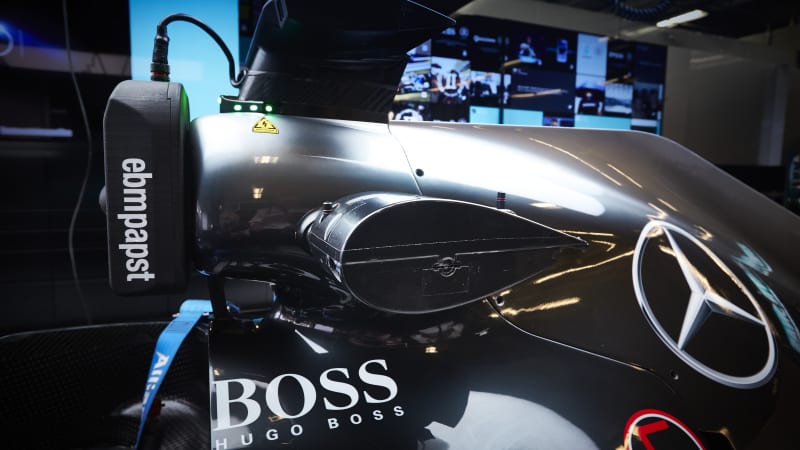 Qualcomm's system works with the race cars like this: Each car has forward- and rear-facing cameras in a winglet mounted on the left side of the engine intake behind the driver's head, which continuously record thermal images of the tires. As a Mercedes enters the pit lane, it passes a Qualcomm 802.11ac WiFi receiver to which it uploads the thermal data. As the car nears the garage, another receiver takes over the upload. Several Qualcomm Snapdragon 805 processors crunch the raw data as it uploads. The data is encrypted – there are always prying eyes in Formula 1. It then goes both to Mercedes engineers in the pits and back at the team's headquarters in Brackley, England.

For the uber geeks among you, we can report that the data is transmitted on the public 5 GHz band. Qualcomm president Derek Aberle says that a typical data transfer rate using the 802.11ac protocol is 200 to 600 megabits/second. "Our implementation is about three times faster than the normal 802.11ac and that's the solution we're using here," Aberle reveals. In future, the transfer rate may go up to 4 gigabits a second. (We'll all remember where we were that day.)

The novelty of what Qualcomm and Mercedes F1 are doing is arguable. They say that wireless upload of the thermal data obviates the need to plug laptop computers into the car to download whilst in the garage, saving time. However, most F1 teams "cut the cord" some time ago, so wireless data transfer isn't new. In fact, most F1 cars do what's called "burst logging" each time they pass the pits, wirelessly throwing data to their respective garages. 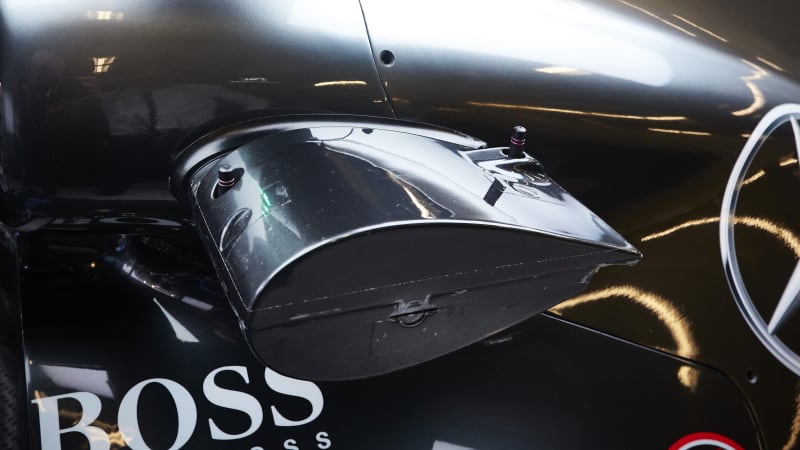 What is new is devoting a single wireless channel to thermal tire imaging. Are other teams doing this? Paddy Lowe isn't sure, but he doesn't think so. Qualcomm's Aberle adds that they work solely with Mercedes F1 and that their wireless is superior to anyone else's.

The result, Lowe says, is that "we download data faster, make better decisions quicker." Nico Rosberg echoes that sentiment. "There are so many parameters, I can't fit all the data onto one [display] page," he admits. The German driver says the wireless thermal tire upload has been particularly useful between runs during qualifying, allowing the team to make previously unachievable data-based tire changes in the very brief time (about a minute) that the car is stopped.

Mercedes says it's perfectly within the rules to stream thermal imaging of the tires during qualifying, which is interesting since a Qualcomm press release on the partnership studiously avoids any mention of data transmission outside practice. If other teams recognize that Mercedes F1 is using Qualcomm's system during qualifying, they'll either seek to copy the practice or protest and then copy the 2015 World Constructors' Champion.

And by next season it may be a moot point anyway since FOM (Formula One Management) is looking to standardize (and restrict) telemetry data. That may mean that every other team would gain the wireless tire imaging capability or they might all be barred from it.

But worry not, the F1 teams will relentlessly look for another tech solution or loophole. They always need more.