Mini has become the Rover that BMW always wanted BMW has been working for 20 years to build a successful line of British cars, and on the evidence of the second-generation Mini Clubman, it may have finally done it. That means it's time for all of us to get used to the fact that Minis aren't going to be that small anymore.

Case in point is this new Mini Clubman, introduced last month and conspicuous by its size. Many of us who've pointed to BMW's stewardship of Mini as an example of retro done right bemoaned the Countryman subcompact SUV – a concept actually ahead of its time. The Coupe and Roadster, perhaps rightfully, deserved (and received) an eye roll.

But now there's a so-called four-door hardtop that went on sale this year and this forthcoming, six-door Clubman that approaches the compact hatchback class in size. These vehicles actually look like practical moves at keeping buyers from defecting to larger cars made by someone else, rather than vain attempts at maximizing investment in a set of parts. And in an interesting twist, Mini is turning into one of its ancestors – minus the feeling of inevitable doom. 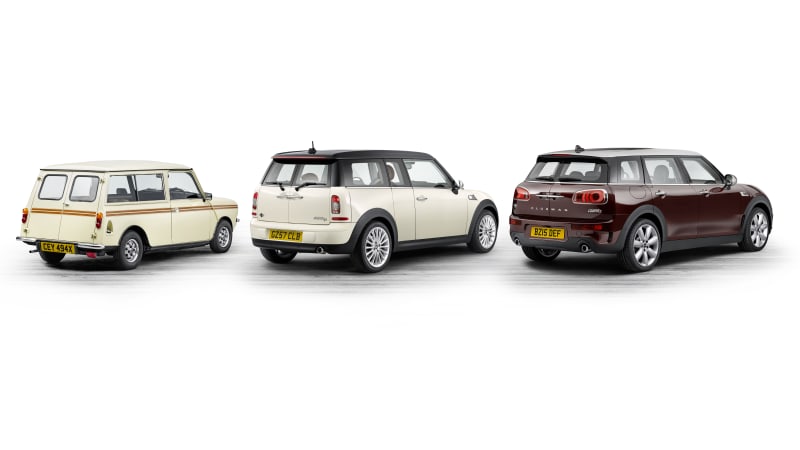 Many of us were led to believe somewhere since Mini's relaunch about 15 years ago that the brand would be a stepping stone into the greater BMW fold. But in reality, it's done exactly the opposite, creating a parallel brand for those not willing to embrace the BMW image, but leaning heavily on British nostalgia.

That was sort of the reasoning used when BMW pulled the Rover Group of England away from a fruitful partnership with Honda in 1994 and absorbed it all. In the consolidate-or-die '90s, it made sense. BMW had a small, but successful, line of sedans. Rover had no success outside of Western Europe (its last US attempt at selling cars, the Sterling, ended three years earlier). Yet its Land Rover line of SUVs was just right for the time and the 35-year-old Mini still had image-conscious clout.

With every passing day, the brilliance of BMW's move to abandon Rover in 2000 seems brighter. Even ditching Land Rover made sense in the long run (and probably saved Jaguar in the process).


With every passing day, the brilliance of BMW's move to abandon Rover in 2000 seems brighter.

During a chat with Mini USA VP David Duncan this summer, it became clear the Mini of the past is probably gone. A small, city-sized Mini is not necessarily off the table, but larger and more profitable models are coming first. The growth of the brand will come from models with four doors, even if they're not abandoning the classic two-door hatch – and trying again with a roadster-like sports model in the vein of the Superleggera concept.

When the new Countryman is unveiled next year and put firmly in the Q3-X1-GLA class, Mini suddenly will have the lineup BMW once planned for Rover, from the err... Mini to the Land Rover Freelander to the remade MG roadster (Mini Convertible, in this case). A small roster compared to many brands these days, but it's very little of what BMW does.

Think about it: The new Clubman and the four-door models could cement the future for the traditional two-door Mini, at a time when cars with two doors seem to be in a terminal decline. The Clubman, with a price tag pushing $40,000, could establish Mini as a brand worth spending that kind of money on, particularly since it's far too easy to spend $50,000 on a BMW 3 Series these days.

Look at it this way: The Mini Clubman is the closest Americans are going to get to buying a BMW 1 Series hatch. And it probably keeps the BMW 2 Series Active Tourer away from us, too. It's a win.