There's Almost Too Much To Learn At The 2015 Honda Meeting Blue skies for our children. That's Honda's wonderfully Japanese/English slogan that it uses as a fresh shibboleth to describe the company's plan for the future. It's vague enough to be positive, positive enough to be corporate, and corporate enough to be repeated in presentations around the world. I've certainly heard it a million times.

The 2015 Honda Meeting in Utsunomiya, Japan this week was, thankfully, held under a brilliant blue autumn sky, on Honda's R&D track filled with the roar of short test drives in the NSX hybrid and the deafening electric silence of the upcoming hydrogen fuel cell FCEV. But that wasn't all. The amount of technical information Honda offered to visiting journalists during the Meeting was nothing short of overwhelming, which is why I'm glad that Autoblog editor Seyth Miersma was along for the ride. We were both at the same event, but we paid special attention to very different things. You can read his take on the four-motor CR-Z EV and the NSX, among other things, here, and get my take on a bunch of Honda's green news below. 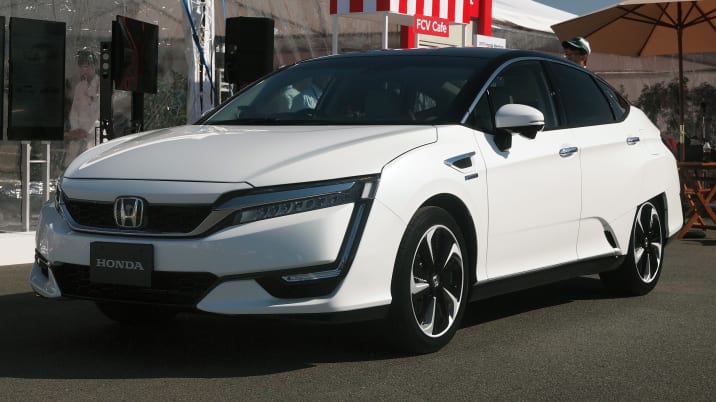 Sure, I got to take a lap in the NSX, but the FCEV was my highlight of the event. This was the first time Honda has let outsiders test drive the upcoming fuel cell vehicle, which the company calls the "ultimate clean performance" vehicle and which is due in the US in next year after a launch in Japan in the spring of 2016. The bad news is that the entire length of the test drive was a measly kilometer, totally straight, with one U-turn at the half-way point. So, even though I went through the course three times (two more than originally scheduled), I can't really say I know how the car drives. What I can tell you is that there are two drive modes, normal and sport, with the main difference being that sport offers stronger regenerative braking and a bit quicker acceleration response. The higher regen level does not allow for one-foot driving, sadly. There's a blue orb that glows in the digital dashboard to indicate the power output of the fuel cell stack (not the motor), so even though the car is fairly quiet as you drive, there's some minimal level of connection between the driver and the "engine." Creature comforts include Honda's excellent LaneWatch and a glossy touch screen for the infotainment system.

When it first unveiled the FCEV Concept in 2013, Honda announced that the size of the new fuel cell stack (it's 33-percent smaller than the stack from the FCX Clarity, introduced in 2008) made it small enough to fit it into the space under the hood. This packaging means that the FCEV's lithium-ion battery can fit under the floorboard and the two hydrogen tanks can be located by the rear passengers' feet and the under the rear seat, protruding into the trunk area. There is ample room for five people in the FCEV. Together, the two H2 tanks hold just under five kilograms of hydrogen, which should be enough to go 700 kilometers ( 435 miles) on the Japanese scale and over 300 miles using the EPA's test procedures. You can learn more about Honda's technological advances for the new Honda FCEV here. 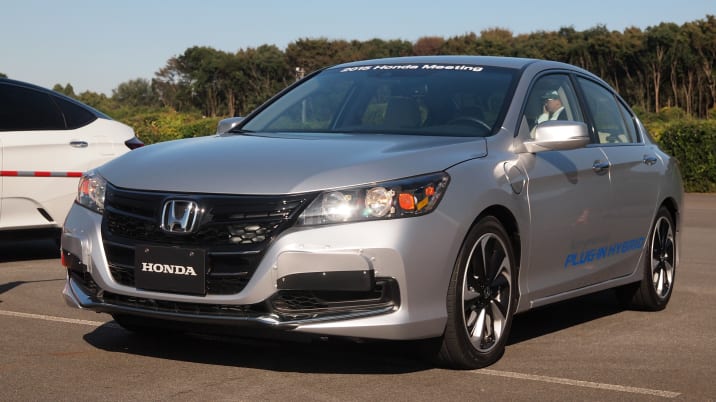 Upcoming Plug-In Hybrid: A Gas-Electric Sibling For The FCEV

We're slowly getting bits and pieces of Honda's new PHEV. One important piece of news from Utsunomiya was that, as suspected, this car and the FCEV will have more in common than a green mindset. While no one could confirm that the two cars will have the same body style, Honda engineers would say that they will share a chassis. The fact that the platform is the same in both vehicles (and, potentially, the upcoming all-electric vehicle, but any talk of that was firmly locked down) means that Honda is looking to maximize cost savings with it alternative-power lineup. This could bode exciting things about the mass-production future of these three green siblings.

Whatever it ends up looking like, the most important bit of news about the new PHEV for customers is that the engineers are targeting a three-fold increase in the car's all-electric range (compared to the Accord PHEV's 13 miles). This means an EV range of over 40 miles when the PHEV arrives in 2017. A range of 40 miles was chosen because it will allow a large number of people to drive in all-electric mode most of the time. The car will also be able to drive in all-electric mode at higher speeds (the Accord PHEV tops out at 80 miles per hour in EV mode). We got to drive the new powertrain in an current-gen Accord mule - on the same one-kilometer loop as the FCEV - and learned that, at this point so far out from the release, the engine revs loudly when you call for quick acceleration. Other than that, we await further test drives to pass even the earliest of verdicts.

Wakashiro Teruo was my Honda representative during my drive, and he said that pretty much the only things that are the same between the powertrains in the Accord PHEV and the upcoming plug-in hybrid are the two-motor configuration and the clutch. Everything else will be improved. The battery chemistry is a bit different, and the lithium-ion battery itself is obviously larger. The motors are more efficient and powerful. The software has been updated. And, of course, it will use the new FCEV chassis. Through a translator, he said that when it comes to green vehicles, "you have to change the spec depending on the country and the infrastructure. We have chosen this chassis which can be most flexible to accommodate any situation. If we make a different chassis, we end up having a lot of costs." It would make sense, then, to build the EV on this chassis, too, right, I asked. "Technically, that's possible, but we cannot mention the next model," he said and laughed. 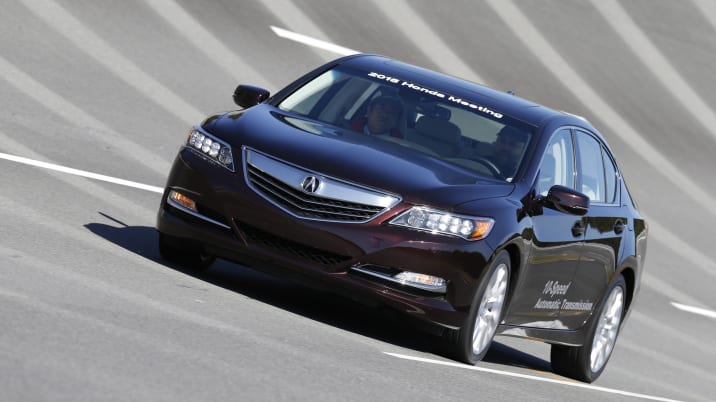 10-Speed Transmission: We Might See It In The US Next Year

Honda is going to offer us the world's first 10-speed planetary automatic transmission, which strives to find the balance between "exhilarating performance" and high fuel economy. It worked fine in the Acura prototype we got to take on the track, and it was fun to see the system kick down from 10th to 6th gear as it found the most efficient match for our speed request. Honda engineers said that simulations showed that a ratio coverage (the ratio of low gear to high gear) of 10 with 10 gears is the best combination to hit those performance and efficiency targets. Honda isn't saying when or if we'll see this 10-speed transmission in the US, but we did hear an engineer say that we will "maybe" see it in a US vehicle next year.

During a roundtable interview with Honda president Takahiro Hachigo, I asked how the limited US release of the Fit EV might help with the company's efforts to sell the new Honda EV, about which we know very little and it due in 2017 or 2018. Without getting into specifics, Hachigo said (through a translator), "We do recognize that there were challenges and issues [with Fit EV sales in the US]. We have reflected on this and will try to deal with these on the next launch. We would like to leverage the previous experience with the Fit EV, and we want to make sure we are competitive with the next launch." If, as we suspect, the new EV carries over a lot of the FCEV and PHEV innards, then Honda will be in a position to dramatically lower the cost of its next pure electric vehicle. At the very least, the EV's launch will be another chance for Honda to talk about all of the blue skies for our children.