Playing Around With The T-Rex, Tundra, And 4Runner Overlander Earlier this year I reviewed an Airstream travel trailer, discovering in the process that the first question almost everyone asks about Airstream is, "They still make those?" Tonka, the toy maker, has the same issue. When I told someone recently that I was going to Tonka, he cocked his head and asked, "Topanga?" No, I said, "I'm going to check out Tonka." The response was, "Tarzana?" After explaining that I was headed to the toy maker, and that I knew the difference between Tonka, Topanga, and Tarzana, he asked, "Tonka? They're still around?"

Yes, and like Airstream they're still doing well at their original line of work, booking millions in sales last year in the US alone among its original Steel line, the die-cast and plush-toy division, and the Urban, Emergency, and Construction lines. Tonka is run by Funrise Toys out of Van Nuys, California under license from Hasbro. You probably haven't heard of Funrise, but you've heard of some of their other licensed products: My Little Pony, Littlest Pet Shop, and Pound Puppies. Funrise also owns the Nylint name, and that license gave it access to the lights-and-sounds technology that it applied to Tonka trucks. And Funrise owns Gazillion Bubbles, described as "the best bubble ever," and the official bubble of the LA Dodgers.

It weighs 10,000 pounds, at full height it stands 12 feet high, and it growls through a Monster diesel exhaust. That is why it is called the Tonka T-Rex.

In 2013 Tonka produced its initial effort at a giant adult toy, using a Ford F-250 as the donor. Banks reworked the diesel engine to put out 700 horsepower and 1,100 pound-feet of torque, thanks to a reflash, as well as additions like a ram-air intake and water methanol system. In front is a custom grille by Galpin Auto Sports, and a Warn winch in an American Force bumper. Bushwacker laid on the fender flares, American Force hooked up the rock rails and side steps. In the bed is a Highway Products roof rack with tool boxes. Underneath, there's a Kelderman three-stage air suspension with a maximum 12-inch lift. It weighs 10,000 pounds, at full height it stands 12 feet high, and it growls through a Monster diesel exhaust. That is why it is called the Tonka T-Rex.

If you're wondering why the Ford badges are blacked out, it's because when Tonka was putting the T-Rex together, Ford wanted nothing to do with it; this was Tonka's version of the Bullit Mustang. What a difference a year made: in 2014 an aftermarket company showed off a Tonka-fied Ford F-150 at the Chicago Auto Show, and this year Ford promoted its industrial products with a Tonka version of its F-750 dumptruck that we got to drive. 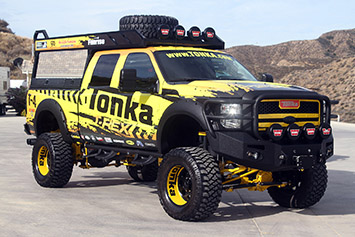 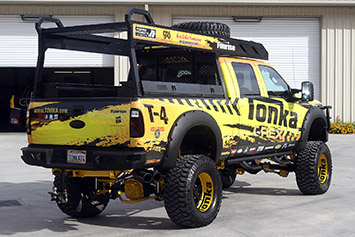 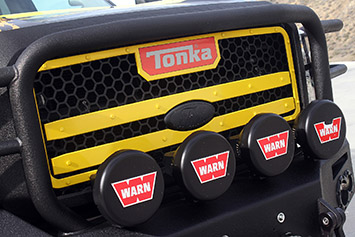 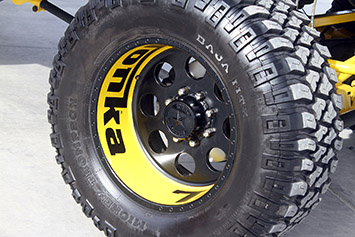 They should park this truck at the Arizona border, because if an earthquake sends California out to sea, this is the truck they'll need to rescue the state.

Tonka knew what it was doing and how it wanted to go further, so in 2014 it partnered with Toyota to turn a Tundra into an Emergency Rescue Vehicle. TRD installed a supercharger to swell output to 500 hp rumbling out of a Flowmaster American Thunder cat-back side exhaust. On the ground floor are 20-inch KMC wheels that lead to a Bulletproof suspension with a ten-inch lift. The body is fitted with all the gear necessary to solve any fiasco, like a Smittybuilt winch, air tanks and gas tanks, fire extinguishers, stretchers, shovel and custom axe, more auxiliary lighting than an episode of America's Next Top Model, and a siren. There's a custom-fabbed water cannon on the bed slider, but it actually shoots t-shirts. They should park this truck at the Arizona border, because if an earthquake really does send California tumbling out to sea, this is the truck they'll need to rescue the state. Or, at least, fire off some t-shirts that say, "So long."

This year sees the third addition to the fullsize line, a Toyota 4Runner turned into a Tonka Overlander. The stance comes from a ten-inch lift thanks to Bulletproof, as well as King shocks and coilovers. Smittybuilt is responsible for the rooftop tent, winch, and other accessories. And while it's not pictured, the Overlander does have a tailgate-mounted spare wheel and jack. I parked a stock 4Runner next to it, which makes the transformation read only one way: cartoonish. Which is exactly as it should be. Because Tonka. If you don't want to risk scratching the Overlander on anything when you're off road, inside is a JL Audio system loud enough to kill every living thing and crumble any obstacle within 100 feet. 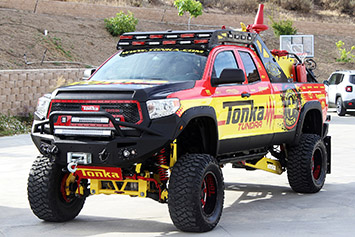 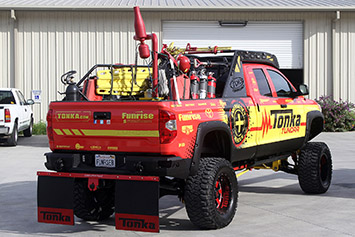 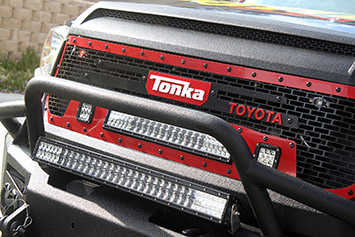 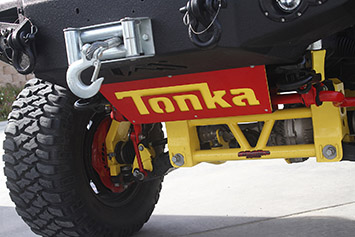 The T-Rex and Tundra are monstrous – you have to remember your box-truck driving techniques.

I drove the trio, and they are all surprisingly easy to wheel. The T-Rex and Tundra are monstrous – you have to remember your box-truck driving techniques, but after that it's point-and-crush. Seven hundred horsepower and 1,100 lb-ft make acceleration in the T-Rex an afterthought for two reasons: it's stupid quick for a five-ton truck, but when driving a leviathan you have a tendency to think like one, and leviathans don't rush.

The Tundra has a lot less power but it's got Nitro custom gearing to make the most of what it does have. She'll scoot, but yet again, why be in a hurry when everyone else on the road is trying to get out of your way? Turn on the lights and siren and actual fire trucks will wait on the side of the road for you to pass. The mechanical suspension is just as comfy as the T-Rex's air-ride on pavement and the dirt. The hardest thing about either truck is climbing inside.

In such company the 4Runner looks the runt, because it is, but it's the runt you still don't want to mess with. There's been no work done to the engine (yet), and 270 hp from a 4.0-liter V6 won't get you the same animated take-offs, but there's a lot less weight to move. Bulletproof knows its business and King is a legend in the field, and they have engineered out any undue tippiness. That tent will definitely be the penthouse on the prairie. I don't know how it would actually do on an overland expedition, though, say, Staircase National Monument in Utah. Maybe Tonka will let us borrow it for a week to find out. 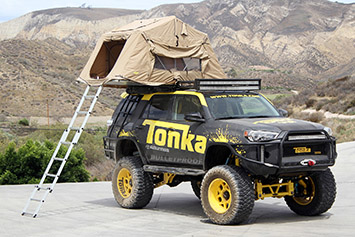 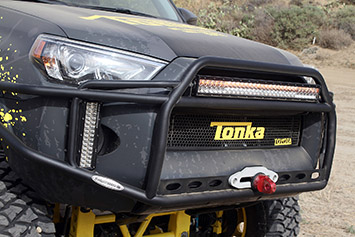 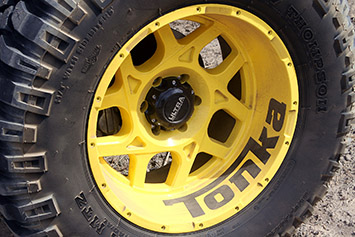 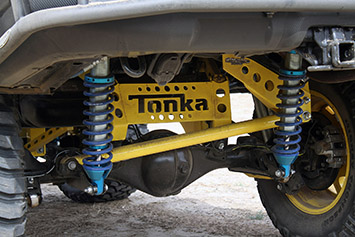 As with any kid presented with an array of toys, I have a favorite: the T-Rex is Earth-shattering and the 4Runner is new, but the Tundra Emergency Rescue vehicle is eleventy billion tons of big-kiddie fun. If you want to see them yourself, Tonka built the T-Rex to sponsor Myan Spaccarelli's race team in the Lucas Oil Off Road Racing Series with Pro 2, Pro 4, Pro Lite, and Pro Buggy entries. Tonka takes the trucks to tracks and builds a giant playpen for kids and their parents, and all three trucks will be at the last race of the season in Lake Elsinore, California, on October 24 and 25.

Speaking of favorites, at the end of the day I asked the Tonka rep what's the best-selling toy they have, expecting it to be the iconic dump truck. Not so. The Tonka garbage truck sells better than anything else, and no one at Tonka knows why. That's all well and fine, but I'm going to stick with the Tundra.