Domenick Yoney
Rich hues of red and gold are taking over the palette of our pastoral landscapes, the morning air has sharpened its bite, and the unwelcome taste of pumpkin spice has invaded all our food and drink. For fans of two-wheeled electric transport, this can only mean one thing: it's time for Zero Motorcycles to reveal its new lineup for the next model year.

Every autumn, without fail, the California-based company introduces its next crop of battery-powered bikes, and each time we see the evolutionary process in slow, but deliberate, action. Last year really saw its products get a nice polish with much improved rubber and suspension, among other things. This year the advancements continue.

When the curtain lifted today at AIMExpo in Orlando, Florida, not only was the Zero stage a bit more crowded with the addition of two new models, but the bikes also had more energy capacity in their batteries, and therefore, better range – the S and SR ZF13.0 with Power Tank option, for instance, could get you 197 miles around the city, or 120 miles at a constant 55 miles per hour on the highway.

Additionally, an improved motor is also being added to most of the lineup for better performance and reliability, while the base Zero S ZF9.8 streetfighter and Zero DS ZF9.8 dual sport, which keep the legacy unit, have seen a substantial $1,000 sliced from their price tags, making them more affordable at $10,995. Another welcome surprise? An optional Level 2 charging set up is being introduced. 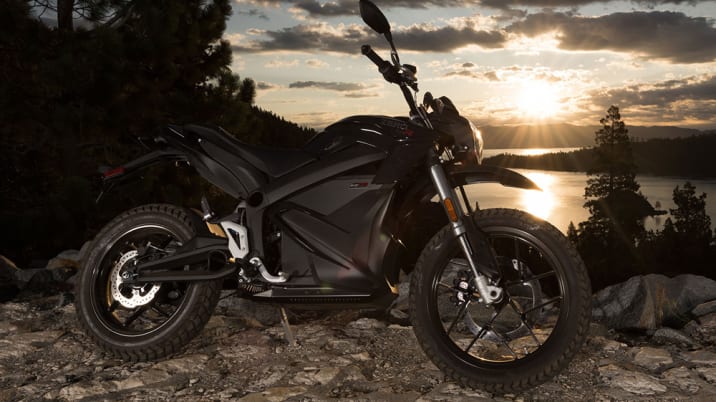 First, let's talk new bikes. The Zero DSR takes the brand's dual sport (DS) machine (now both sporting a taller handlebar riser for better control) and stuffs in the same high-performance heart that beats rapidly within the aluminum bones of the speedy Zero SR, adding an additional 56 per cent torque punch – now 106 pound-feet – and ramping up the horses from 54 to 67. With your butt in the saddle, this means a 0-to-60 mile-per-hour charge (pun intended, with apologies) in an exhilarating 3.9 seconds. It can hit 98 mph at maximum, and maintain a 90-mph momentum for a sustained period. Like the SR, it is only offered with a 13 kWh (11.4 nominal) pack configuration, though you can add the optional 2.8 kWh Zero Power Tank ($2,674) and bring up the total capacity to 15.9 kWh (14 kWh nominal). Without the added battery, the price is the same as the 2016 SR ZF13.0, at $15,995. 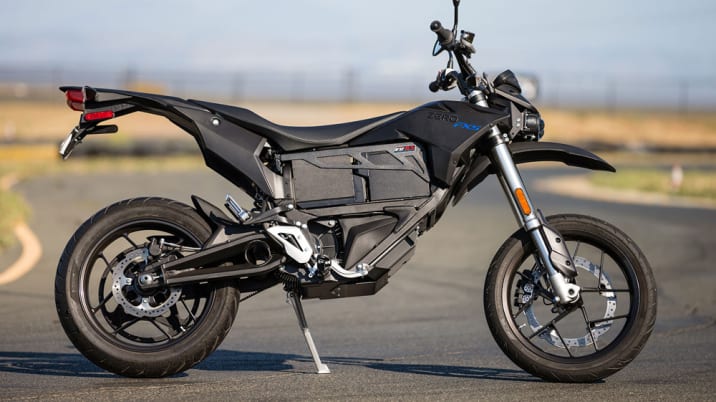 The Zero FXS, is also new for 2016, and brings a supermoto package to the FX platform straight from the factory. Both models benefit from a taller handlebar riser and have a slightly bigger (and still swappable) battery options than the 2015 machines – now 3.3 kWh (2.9 kWh nominal) and 6.5 kWh (5.7 kWh nominal), but the FXS boasts a new set of 17-inch wheels front and back, wrapped in the finest Italian Pirelli Diablo Rosso II rubber, in place of the 21-inch front and 18-inch rear hoops sporting Pirelli Scorpion MT tires on the FX. This smaller wheel diameter means quicker acceleration, allowing the FXS ZF6.5 to hit 60 miles per hour from a standstill in 3.8 seconds, two tenths sooner than its dirt-capable sibling. Top maximum speed is given as 82 mph, with top sustained speed being listed as 75 mph. Both models still sport Showa suspension, though the front shocks on the supermoto have, appropriately, a little less travel. 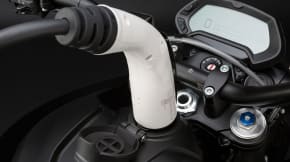 Also new for 2016 is the optional Charge Tank. This fits into the storage compartment above the battery and gives the Zero S, SR, DS, and DSR the ability to charge at the many level 2 stations equipped with a J1772 connecter. Working in conjunction with the standard equipment 1.3 kilowatt charger, the setup can pull up to 3.8 kW from the grid. According to the company, this allows charging of ZF9.8 packs to 95 percent in about two hours, and the new higher-capacity ZF13.0 battery in about three hours. Because it fits into the same space as the optional 2.8kWh Power Tank option, both can't be installed in the same bike. Still, we see this as a great option, as it extends road trip abilities similar to carrying the extra battery, but, at $1,988, is cheaper than the Power Tank and lighter to boot.

Zero Motorcycles had, in the past, offered a CHAdeMO DC charging option. While that would seem more desirable on paper, the reality is that these level 3 stations are harder to find and access, and many of them stray from the originally intended specification that would allow them to work with the voltage levels of the Zero system. The other big news for 2016 is a redesign of the Zero's air-cooled motor, now known as Z-Force Interior Permanent Magnet (IPM) motor, which comes with the Zero DSR, SR, FXS, S ZF13.0, and DS ZF13.0. While it looks pretty much the same on the outside as the unit powering the brand for the past few years, the insides are quite different. Zero engineer Ryan Biffard explained it to us thusly,

"The new 2016 ZF IPM (Interior Permanent Magnet) motor is an evolution of Zero Motorcycles high efficiency ZF motor, introduced in 2013. The patent-pending IPM design increases efficiency at high speed, so the motor produces less heat, and places the magnets inside the rotor where they are better protected from un-desirable magnetic and thermal effects of the stator. These changes result in cooler magnet temperature relative to the stator temperature allowing for operation at higher stator temperatures without risk of damaging the motor. While the rotor design was electromagnetically optimized to maximize performance, it was also structurally optimized to minimize rotational inertia, further enhancing its response."

What that means in practice is you can ride harder without worrying about getting a reduction in power, or "thermal cutback", as it is often referred to, while making the motor much more bullet proof. If we understand the science of it, it also means the motor will stay more efficient at (possibly extra-legal) higher speeds and we expect highway riding ranges to be somewhat extended.

You can get more details in the official press release below, and lots more tech specs from the Zero Motorcycles website. If you happen to be in the Orlando area over the next few days, pop into the AIMExpo and see them in person. Of course, if you want to see the bikes in action now, cruise on down below, where we have footage for each model awaiting to be enjoyed.


SANTA CRUZ, Calif., (Oct. 15, 2015) – Zero Motorcycles, the global leader in the electric motorcycle industry, today unveiled their complete line of 2016 motorcycles. Following a record year in 2015, the California-based manufacturer promises to inspire an even broader range of riders with two new models, an innovative new motor design, faster charging and advanced lithium-ion cell chemistry powering the highest battery capacity and efficiency to date. Zero delivers even greater value by lowering the price on two base models while adding more features and performance throughout.

"2016 marks our tenth year of pioneering electric motorcycles," said Zero Motorcycles CEO Richard Walker. "In an industry where sales are pretty flat and breakthrough innovations hard to find, we continue to experience rapid growth by investing in technology that delivers excitement and a ride experience unmatched by anything."

The 2016 announcement began with the introduction of two new motorcycles, bringing Zero's offering to six distinct models. The supermoto-inspired Zero FXS promises to turn mundane city streets into an urban playground. It features 70 ft-lb of torque, weighs less than 300 pounds and boasts components specifically tailored to provide exceptional control and responsiveness on the street. Adventure riders demanding maximum performance will enjoy the new Zero DSR. With 106 ft-lb of torque, the versatile dual sport is quick on the pavement and demonstrates greater prowess on dirt roads and trails.

"The 2016 line is the culmination of a decade of experience and leverages what we do best: create electric powertrains that deliver a thrilling ride," said Abe Askenazi, Zero Motorcycles Chief Technology Officer. "The technology is sophisticated, but the way the power is delivered is simple and pure. Ride one, and you'll understand why we are focused exclusively on electric motorcycles."

Zero continues to advance state-of-the-art electric motorcycle technology with their signature Z-Force® powertrain. The new Z-Force® IPM (interior permanent magnet) motor produces power more efficiently, cools more rapidly and has higher thermal capability, which translates into significantly improved performance during hard riding and allows higher sustained top speeds. Power is delivered by Z-Force® power packs with optimized lithium-ion cell technology. The system boasts the highest energy density in the electric vehicle industry. Gains in capacity and efficiency have pushed the range up to 197 miles in the city and 98 miles on the highway (at 70 mph) with the optional Power Tank accessory.

Zero Motorcycles delivers the speed and convenience of Level 2 charging. With the new Charge Tank accessory, riders will be able to take advantage of the rapidly expanding network of public charging stations and charge three times faster. The Charge Tank works on the popular J1772 standard and effectively recharges a Zero in two to three hours.

Zero continues to set the benchmarks in performance, selection and range. As innovation enables the motorcycles to go farther and faster, they are also becoming easier to own.

"We set out to transform the two-wheeled experience for transportation and recreation, and a key part of that strategy is to make our motorcycles available to more people," said Scot Harden, Zero Motorcycles VP of Global Marketing. "Investments in technology, our experience and continued growth allow us to lower the price of two of popular models, the Zero S ZF9.8 streetfighter and Zero DS ZF9.8 dual sport. The thrill of electric is more accessible than ever."

Detailed specifications and prices are available at www.zeromotorcycles.com. New models arrive at authorized Zero Motorcycles dealers in November 2015. Motorcycle prices range from $8,495 to $15,995, depending upon model. The Charge Tank accessory is scheduled for delivery in spring 2016 and will have a suggested retail price of $1,988. The range-extending Power Tank accessory is available now and lists for $2,674.

About Zero Motorcycles
Zero Motorcycles is committed to transforming the motorcycling experience by bringing to market highly innovative electric motorcycles that offer exceptional value and performance. Zero is powered by innovation, driven by passion, guided by integrity and measured by results. Through extensive research, insight and experience, Zero combines the art and science of motorcycle development to create and manufacture products that excite consumers and inspire brand loyalty. Every model is designed and built in California. Zero is determined to be the preeminent global electric motorcycle company.