General Motors is recalling a bunch of previously recalled SUVs because, well, they still aren't quite fixed. The latest repairs are necessary on 10,974 SUVs in North America, including 9,932 in only the US. Affected models include the 2006-2007 Buick Rainier, Chevrolet Trailblazer, and GMC Envoy; plus the 2006 Trailblazer EXT and Envoy XL. While not listed by NHTSA, a statement by GM to Autoblog says the 2006-2007 Saab 9-7X and Isuzu Ascender are also affected.

In these SUVs, it's possible that liquid could get into the driver's door master power window switch module and cause a short circuit. This could potentially lead to a fire, and owners are urged to park the vehicles outside until repaired.

GM has been trying to fix this issue for years. It started as an investigation into fires, and that led to a recall for about 250,000 vehicles in cold-weather states. A nationwide campaign came in 2013 for 193,000 of them in the US. Last year, the automaker decided to replace the whole module as a repair.

However in a recent investigation of these recalls, GM discovered that this latest group of SUVs never received the new part. According to documents submitted to NHTSA ( as a PDF), "Some dealers incorrectly used the labor code associated with module replacement when, instead of replacing the module, they only added a protective coating to the module." To fix things this time, the models finally get the correct component.

General Motors is recalling 9,932 older midsize SUVs in the U.S. because they were mistakenly excluded from an earlier recall. Certain 2006 Chevrolet TrailBlazer EXT and GMC Envoy XL, and 2006-2007 TrailBlazer, Envoy, Buick Rainier, Saab 9-7X and Isuzu Ascender vehicles may continue to have a condition in which the printed circuit board inside the driver's door may corrode and short if exposed to certain fluids such as melted snow containing road salt. GM is aware of four fires but no crashes, injuries or fatalities associated with the expanded recall. The total number of vehicles being recalled, including Canada, Mexico and exports is 10.974. Customers are urged to park these vehicles outside until repairs have been made. GM reported this recall to the NHTSA on September 23.

SUMMARY:
General Motors LLC (GM) is recalling certain model year 2006-2007 Buick Rainier, Chevrolet Trailblazer and GMC Envoy vehicles, and 2006 GMC Envoy XL and Chevrolet Trailblazer EXT vehicles. Fluid may enter into the driver's door master power window switch module, causing corrosion that could result in a short in the circuit board, causing window switches to become inoperative. Previously, the affected vehicles may have had their master power window switch module treated with a protective coating, instead of having it replaced.

CONSEQUENCE:
The protective coating may not eliminate the risk that the circuit board could short and result in a fire, even while the vehicle is unattended. 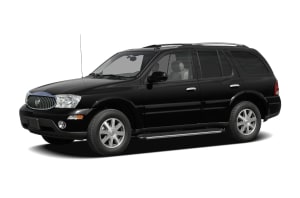