View All Specs
Add a Review
The 2016 GMC Canyon Diesel and the 2016 Chevrolet Colorado Diesel are basically the same truck. This isn't really news – the two midsize pickups have been discussed side by side since their inception. If you stop reading right now, go to our First Drive story from last week, and replace "Colorado" with "Canyon," you won't miss a beat. Samesies.

Looks-wise, the Canyon is a bit more polished overall than the Colorado on which its based. The front fascia has a more upscale, yet tough aura, the squared-off headlamps mimic those of the Sierra, and the alloy wheels – especially those on this SLT tester – are a premium touch. Inside the cabin, it's all carryover stuff from the Chevy truck, just with different badges and some unique color/trim combos.

So it's a Colorado Diesel with a Canyon treatment. It's the typical GMC updo. But that's fine by me; this thing's a real sweetheart.


There isn't much more to say about the drive, short of just copying and pasting Gluckman's Colorado drive into this space. The Canyon Diesel is nice – some interior materials are a little questionable, but on the whole, this is a pleasant, somewhat upscale pickup (especially in SLT trim). It's expensive, though. The truck you see here costs $45,280, and a different version I drove was closer to $46,000. The diesel engine is a $3,730 option, can only be had with Crew Cab Canyons, and comes with either two- or four-wheel drive.

So it's a slightly fancier Colorado. Cool. That's the story of GMC, right there. The Sierra is tweaked Silverado. The Terrain is an Equinox. The Yukon, a Tahoe (or Suburban, if it's a Yukon XL). And the Acadia is a Traverse ( and partially a Saturn Outlook). None of that matters, though. GMC is a huge cash cow for General Motors, especially with its Denali line that retails for huge margins over similarly spec'd, loaded Chevys. (Yes, there will be a Canyon Denali, soon.) It's a formula that works not just for GMC, but for GM as a whole, and the Canyon Diesel is another great part of that successful strategy. 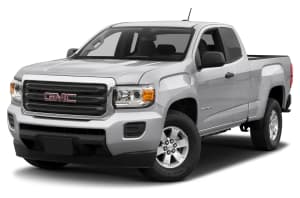