Subaru is planning a whole raft of new debuts for the upcoming Tokyo Motor Show. One of them we've already seen in the updated Forester crossover. But that's just the tip of the proverbial iceberg when it comes to Fuji Heavy Industries' plans for the Japanese expo.

Leading the lineup will be two brand-new concepts. Subaru will be showcasing a conceptual preview of the next-generation Impreza. The five-door hatchback is so far only being shown in sleek and shapely design renderings, so we'll have to wait as the show approaches to see more. But from what little we can see so far, the hatchback looks promising. 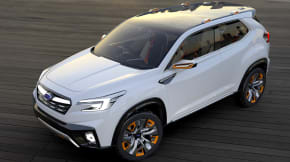 Along with the Impreza is the hybrid Viziv Future concept, which builds on previous Viziv design studies in a crossover form that just might preview the upcoming replacement for the Tribeca. The sporty crossover concept is rendered in a muscular-looking take on typical Subaru style, in white with metallic and orange accents inside and out.

A full glass sunroof lets the light into the thoroughly modern cockpit, with a large dashboard monitor and four individual bucket seats accessed by conventional front doors and what look like van-like, pillar-less sliding rear door like you might see on a Ford B-Max. The concept is fitted with a bike rack, automated driving is provided by the next-generation EyeSight system, and motivation comes from a turbocharged hybrid setup. This being a Subaru, it naturally features all-wheel traction, but it's provided through the road thanks to the electric motor on the rear axle.

Other features of the Subaru pavilion in Tokyo include a luxed-up version of the WRX S4 dubbed SporVita, with an Italian leather interior. Other interior trim, 18-inch wheels, and a raft of otherwise optional equipment comes part of the package which will also bee seen on the Legacy. There'll be a few more new debuts – including new versions of the XV, Levorg, and WRX STI S207 – to be revealed later this month, along with the BRZ GT300 that Subaru fields in the Super GT series.

"New Subaru Story" is the theme of this year's booth. By providing automobiles that can be used with "enjoyment and peace of mind", Subaru wants to be broaden the activity realm of customers, becoming the occasion for a new story. At this year's show, the "Subaru Life Theater" will use five large screens to portray the worldview of "enjoyment and peace of mind" provided by Subaru.

Among the products on display will be two concept models in their world premieres, the "Subaru VIZIV Future Concept",*1 giving substance to Subaru's future vision by incorporating automatic driving functions and other advanced safety technology, and the "Impreza 5-Door Concept", a design study model of the next-generation Impreza.

Visitors will also be able to see the "SporVita Series", special editions of the WRX S4 and Legacy B4 with high-quality interior space; the "S207", an STI*2 complete car based on the WRX STI; and upgraded editions of the Forester and Subaru XV, for a well-rounded experience of the "enjoyment and peace of mind" Subaru vehicles offer.

The press briefing will be given by FHI President Yasuyuki Yoshinaga on Wednesday, October 28 starting from 1:45 p.m. at the Subaru booth in the East Exhibition Hall, and will be streamed live on SUBARU-USTREAM(http://ustream.tv/channel/SUBARU-USTREAM).*3

The official Subaru website (http://www.subaru-global.com/2015tokyo.html) will feature information on the Subaru booth.

List of Exhibits
•Models to be displayed for reference

Subaru VIZIV Future Concept is a SUV-type concept model embodying the future vision of car development for "enjoyment and peace of mind" that Subaru wants to provide to customers. Along with a package of design features that motivate the owner to get out and get active, this car gives a look at next-generation technologies that will further enhance the reputation of Subaru for "enjoyment and peace of mind" in driving. Among them are the automatic driving technology resulting from the ongoing evolution of EyeSight, and the power unit combining a downsized turbo engine with a hybrid system. Subaru remains focused on providing cars that enrich the lives of customers, as the start of an exciting new chapter. The Subaru VIZIV Future Concept gives a glimpse at the future Subaru has in mind for the brand.

The design concept is "Subaru & Active Life". Giving concrete form to the Subaru Dynamic & Solid design theme, the design clearly shows the value of "enjoyment and peace of mind", while generating the urge to go out and actively discover the wide world.

Exterior
•The body as a three-dimensional solid form is given a clear polished surface enhancing the impression of high density and sturdiness. This design along with the powerfully extended fenders expressing the reliability of Subaru All-Wheel Drive (AWD) evoke the safety, enjoyment, and peace of mind of Subaru.
•A true SUV style is expressed throughout, by the strong motifs starting from the hexagonal grill that symbolizes the Subaru identity and flowing to the sides and then ascending to the rear pillar, as well as by the dynamic and wide bumper motif.

Interior
•The interior design heightens peace of mind and the anticipation of driving, by means of a dynamic motif spreading out symmetrically from the cutting-edge interface between the center and powerful frame.
•An active life style is evoked by the beige and black contrast along with the use of orange as a unified accent color inside and out, creating a sporty and joyful space.
•A camera for monitoring the driver is located on the instrument panel glare shield, further adding to peace of mind when driving.

"Enjoyment and peace of mind" have been expanded by making advancements to EyeSight, Subaru's original stereo camera-using technology, and by merging the linking technologies like vehicle-to-external communications and telematics. Element technologies have been incorporated that will lead to development of automatic driving worthy of Subaru.

1) Combining the advanced front recognition of EyeSight with all-direction radar sensing, the traffic environment around the vehicle and risk from all sides are monitored. In addition, high-accuracy GPS and map data are used to pinpoint the vehicle location with high precision; and optimum control is applied based on curves, lane lines, and other information about the route ahead. Thanks to these technologies, not only is collision avoidance realized during straight-ahead movement, but avoidance of collision in all directions, with vehicles, bicycles, and pedestrians, when turning at intersections or when backing up, is also enhanced. Automatic driving is realized at all speeds on expressways, and automatic parking is supported at home or in commercial facilities' parking lots.

2) The adoption of technological advances in telematics and HMI enables anticipation of traffic, weather, and other conditions along the route ahead, as well as effective communication of intentions with people and vehicles. Communication of information supporting the customer's hobbies and other aspects of an active life is another feature of automatic driving that imparts driving peace of mind while making car life more interesting.

The next-generation hybrid system has advanced every aspect of the system first launched on the market with the Subaru XV Hybrid. The combination with a downsized turbo engine improves fuel efficiency, while at the same time the smooth, linear feel when accelerating brings driving enjoyment.

The downsized turbo engine adopted by Subaru for the first time in the Levorg has been further advanced, and optimized in all dimensions specifically for the next generation of cars. Compact size, light weight, and net thermal efficiency that is top in the segment raise to a new level the ability of Subaru to combine enjoyable driving with fuel efficiency.

The propeller shaft has been eliminated by mounting the single motor concentrically on the rear axle in a compact layout. In addition to AWD capabilities, a flat floor is realized for an expansive, comfortable interior space. Moreover, it inherits the Subaru AWD performance while further improving maneuverability, thanks to the vectoring effect of actively controlling front/rear driving force distribution.

The Impreza 5-Door Concept is a 5-door style concept model. It takes its inspiration from the design of the next-generation Impreza envisaged in FHI's Mid-Term Management Vision "Prominence 2020," announced in May 2014, as the first Subaru new-generation model.

The Dynamic & Solid theme will be featured more prominently in new-generation models as the essence of Subaru. Adopting that theme as core, the design of this concept model expresses value exceeding its class, from the dynamically sporty feel that heightens the anticipation of driving, essential in Subaru design, to the solid performance functions that heighten the sense of innovation and peace of mind.

The name SporVita combines the Italian words sportiva (sports) and vita (life). It expresses the way the sporty performance of a Subaru vehicle and the uncompromising pursuit of a quality interior space combine to enrich the car life of drivers.

The genuine leather seats unique to the SporVita were designed in collaboration with renowned Italian leather maker Mario Levi, the first such adoption in Japan by a Japanese automaker. Overall style coordination achieved by modifying the trim and instrument panel decorative effects result in a quality interior space having a strong emotional appeal. The sporty performance of the WRX S4 is further enhanced by the 245/40R18 high-performance tires. Moreover, the Advanced Safety Package, providing a higher level of safety in combination with EyeSight, is standard equipment. In these and other ways, the individuality of the WRX S4 has been enhanced, with specifications befitting its status as a sport sedan for adults.