You can watch the video above or read a transcript below. And don't forget to watch more Autoblog videos at /videos.
Show full video transcript text
[00:00:00]Hi y'all. This is Seyth with Autoblog. I am driving the 2016 Acura RLX Sport Hybrid SH All-Wheel Drive, or SH-AWD, as we like to call it. Any way you slice it the name is a mouthful. This version of the RLX, the hybrid, incorporates an all-wheel drive system that includes three electric motors: one up front, two in the rear turning the rear wheels in

[00:00:30]addition to the 3.5-liter gasoline engine. Now, that powertrain effectively makes it the performance version, hence the sport, of the RLX line. It's got a total system output of 377 horsepower, and 341 pound feet of torque so there's plenty of go juice in this hybrid. Clearly Honda had some performance in mind when they were putting this system together in addition to the sort of typical hybrid good gas mileage. It's rated at 28 MPG in the city, and 32 on the highway.

[00:01:00]I've been seeing around 28 in two days worth of driving so far, and playing around with it. It's not the fuel-sipper that you're going to buy ... not a car that you're buying for economy exclusively. The good news is that when you really get into it, the car does feel quite quick. You still have that electric torque so you're really getting a lot of torque push from the rear wheels. You really do feel like kind of a performance all-wheel drive experience

[00:01:30]more than a front-wheel drive experience like you get in the typical RLX. Now, it's not a sports sedan. It's pretty squishy. There's not much steering feel. Really throwing it from bend to bend isn't that rewarding. The car that I'm driving today is loaded out to around $67,000. I think you can spend a little bit more than that if you really try, but it kind of is at the top end of the RLX range. I feel like everything does come together kind of neatly. I don't think that this interior is going to feel very old in a couple of years. I think it'll age pretty well because it's a

[00:02:00]conservative design frankly. The downside is that, unlike some cars, particularly a lot of the new Mercedes coming out right now, nobody's going to sit down in this RLX and think, "Wow. This is a gorgeous cabin." They're not really pushing the envelope. You've got a touchscreen here. You can also access it through a sort of central knob. The software also seems to have a lot of latency between me doing something and it responding. When I'm scrolling from a Sirius radio station in the 20's to one in the 100's the software really lags.

[00:02:30]I don't really understand why that's the case in a car that's got a 2016 model year on it. The other thing that traditionalists really might not like is the push-button transmission. Acura's done something really interesting here. They've used different button shapes and placements. You sort of push back for reverse. There's a big round button for drive, that's the most prominent. Park is up front sort of out of the way. You get used to it in a little bit, exactly what you're looking for without looking down. Now, that being said, it's

[00:03:00]not the same shift lever that everybody has used in a automatic transmission for most of their lives, or on the column, so it doesn't feel quote unquote "intuitive" right away. Typically if you're spending 60, $70,000 on a luxury car you want something German. Perhaps Cadillac. You want something that's got straight-ahead performance and typically rear-wheel drive and looks the part. The Acura's different on all of those fronts. It's a little bit more intellectual I suppose. Definitely more geeky. From the way that it looks to the way that it goes down the road it's just a different approach to building an automobile. 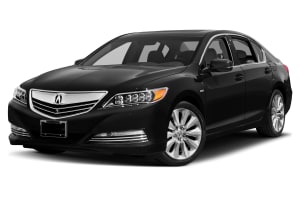