Plus: Notes On Mazda's Sports Car, The Rock And Ford, And Tesla's Model X

Greg Migliore
Volkswagen's woes continued this week when it was delisted from the Dow Jones Sustainability Index and stripped of awards. Senators are also lining up to advocate for criminal and civil action against the automaker, and its consumer reputation is in tatters. Put simply, it's been another rough period for VW.

Despite this, the company eked out a sales gain of less than one percent in September, though that was well behind the overall market's performance. Sister brand Audi, which sells a diesel A3, was less affected, posting a 16-percent gain in September. Revelations that Volkswagen rigged millions of diesel-powered cars around the world didn't surface until September 18, so the full sales impact of the ongoing scandal won't likely be felt until October.

Meanwhile, VW's image continues to take a beating, and an AutoPacific survey found only one in 14 vehicle owners have a positive opinion of the company. Before the scandal broke, three-quarters of respondents had a positive view of VW. The survey also found 64 percent don't trust Volkswagen, though the same number believe other companies are or may also be using cheating devices to pass emissions tests. "The reputation of diesels has been severely damaged, at least for the short term," Ed Kim, AutoPacific's vice president of industry analysis, said in a statement.

Despite the lingering malaise, experts believe VW will recover, just as Toyota and General Motors eventually emerged from their own high-profile controversies. "Consumers have proven through numerous recalls that they are resilient and quickly return to their buying habits," Kim said. 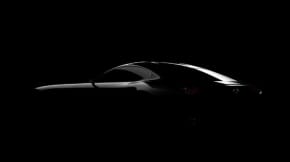 Mazda will bring a curvy sports car concept to the Tokyo Motor Show in October. The automaker is being especially coy with the details, only releasing the dark teaser shot that you see to the right and a cryptic statement that suggests the concept "condense[s] Mazda's entire history of sports-car development into a single model." Immediately, speculation abounded this is an RX-7 and RX-8 successor, though Mazda didn't specify what engine the concept will have. Reportedly, the company is still working on rotary engines. Mazda will have a Cosmo Sport 110S on its stand in Tokyo, which pioneered rotary technology in 1967. Read into that what you will. 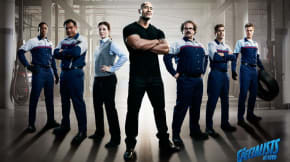 Dwayne Johnson, also known as The Rock, is the new frontman for Ford service. Television ads featuring the wrestler/actor will launch on Monday, and he'll lead a team of Ford service techs dubbed "The Specialists" in the spots. The Rock claims to be a longtime Ford fan, and according to an Instagram post he says his first car was a 1977 Thunderbird he bought for $40 at the age of 15. "I didn't even have money to put gas in it, but it was all mine and I've been a Ford man ever since," he wrote in the post. He now owns three Fords, and says an F-150 is his favorite. Ford says it has a multiyear agreement with Johnson, who joins actor Matthew McConaughey ( Lincoln ads) in the company's stable of high profile pitchmen. 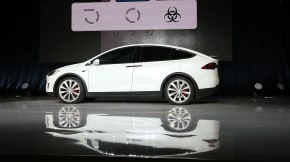 Featuring Falcon doors and an advanced air filtration system, the Tesla Model X finally broke cover this week after years of anticipation. The crossover has an all-electric range of 257 miles with the 90D variant and can hit 60 miles per hour in 4.8 seconds. With the P90D (P is for Performance), the Model X's range drops slightly to 250 miles, but it can sprint to 60 in 3.2 seconds in Ludicrous mode.

"This car is so fast it's wrong," Tesla CEO Elon Musk said. The all-wheel-drive vehicle has room for up to seven passengers, a huge panoramic windshield, and a suite of active safety features. Despite its power and array of whiz-bang tech, Musk reiterated the Model X's mission is to bring electricity to more consumers in more segments of the market. "It's important to show that any type of vehicle can go electric," he said.