Brandon Turkus
UPDATE: This post has been edited to include a statement from Porsche.

While police blamed the crash that killed Fast and Furious star Paul Walker and racecar driver Roger Rodas on excessive speed, Walker's daughter, Meadow, thinks Porsche is at fault. The 16-year-old has now filed a wrongful death suit against the German manufacturer to back up that allegation.

According to legal documents obtained by E! Online, the suit alleges that the Carrera GT that Walker and Rodas died in "lacked safety features ... that could have prevented the accident or, at a minimum, allowed Paul Walker to survive the crash," with Porsche Stability Management being called out in particular. Federal motor vehicle safety standards didn't require new cars sold in the US to be equipped with electronic stability control until 2012.

The suit focuses not only on the Carrera GT's lack of electronic safety systems and "history of instability and control issues," but on an allegedly defective seatbelt. It claims that upon impact, the belt "snapped Walker's torso back with thousands of pounds of force, thereby breaking his ribs and pelvis," and prevented him from exiting the car before it caught fire, roughly a minute and 20 seconds after the initial impact, according to TMZ. Soot found in Walker's windpipe supports the theory that he was alive and breathing when the fire started, the suit continues.

Like the suit Roger Rodas' widow filed against Porsche in 2014, Walker's filing also alleges that the Carrera GT wasn't traveling at 80 to 93 miles per hour, as a police investigation concluded. But where Mrs. Rodas claimed the Carrera GT was going 55 at the time of the crash, this suit claims the hypercar was moving at 63 to 71 mph. That's a more manageable figure to be sure, and if true would have a serious impact on the way the car behaved, but it's still well above the road's posted 45-mph speed limit.

"The bottom line is that the Porsche Carrera GT is a dangerous car," Meadow Walker's lawyer told TMZ. "It doesn't belong on the street. And we shouldn't be without Paul Walker or his friend, Roger Rodas."

Porsche, meanwhile, has stood by the reports from the Los Angeles County Sheriff's Department and other authorities.

"As we have said before, we are very sad whenever anyone is hurt in a Porsche vehicle, but we believe the authorities' reports in this case clearly establish that this tragic crash resulted from reckless driving and excessive speed," spokesperson Calvin Kim told Autoblog in an emailed statement.

The suit does not include a figure on damages. 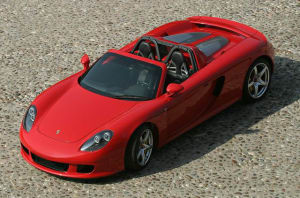