Bloodhound SSC, the 1,000-mph land speed record contender, broke cover this week in Canary Wharf, London, in the heart of the Docklands financial district. "This is the best of British engineering meets the best of British banking," quipped Philip Dunne, MP, minister of state for defense procurement, which has provided backing for the team in terms of Army and Royal Air Force personnel and equipment.

The team announced that Bloodhound will do its first test runs in Newquay, Cornwall, next spring before traveling to Hakskeen Pan in northwest South Africa in the fall. There, on October 15, 2016, it will make its first attempt on the land speed record, which currently stands at 763.035 miles per hour. That speed was set by Thrust SSC in the Black Rock desert on October 15, 1997 by Bloodhound's driver, Andy Green. Nineteen years later to the day, Green will be shooting for a speed over 800 mph. 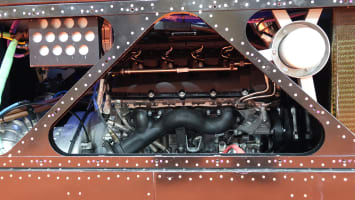 Over 8,000 people will come to Canary Wharf to see this extraordinary jet- and rocket-powered car over the next couple of days. This is the first-ever viewing of the machine in assembled form. The right-hand side is fully dressed in desert spec, complete with forged aluminum wheels and aerodynamics. The left-hand side is in 'naked' Newquay test spec, with panels removed for easy access and the whole thing riding on rubber tires that can run on tarmac.

First impressions are of a big yet muscular car simply crammed with engines, jets, and rockets. The most recognizable thing, apart from the seven fire extinguishers, is the Jaguar AJ133 5.0-liter V8, lifted from an F-Type, which will run the fuel pumps that deliver over 211 gallons of high-test peroxide over the rocket motor's 20-second burn time. The EJ200 Typhoon military jet engine occupies the top floor and provides nine tons of thrust, and underneath is the single Nammo rocket motor providing an additional four tons.

"When we go for 1,000 mph, we'll need another two rocket motors," says Mark Chapman, Bloodhound's chief engineer. "That total additional eight tons of thrust is what we'll need to get from 800 to 1,000 mph."

He explains that the rear of the car will have to be redesigned to accommodate the two additional rocket motors, and the suspension might have to be adapted with longitudinal rear spring units like the fronts. There are still unknowns in the project, such as the area of vacuum that will follow the car several meters behind.

In record breaking it's always those final few miles per hour that are the problem.

"It'll be behind the car sucking it back, destabilizing things, and it's incredibly difficult to model," says Chapman. "We hope that the engines will make a sort of boat tail of pressure to negate it, but we might have to make further adaptations such as perforating the rear panel to allow air into the car, or adjust the rocket and jet nozzle trading thrust for drag. We can play tunes with it, but only once we have the data."

Team director and experienced record breaker Richard Noble is confident that the team can make its Hakskeen Pan deadline, but cautions against overconfidence. "I think we'll get out there all right," he said, referring to the team's arrival in South Africa, "and if the money's okay, we'll make the first runs, but in record breaking it's always those final few miles per hour that are the problem."

There's also the ever-present difficulty of sponsorship. "To get through this next year, we're going to need about 17 million pounds," said Noble. "We've got some clear water now and we need to get the car properly built and to Newquay, but we often find ourselves in huge gulfs between promised sponsorship."