Autoblog Staff
Bob Rand bought his Volkswagen Passat last year for its clean emissions and high gas mileage. He liked the car so much he convinced his son and a friend to buy one, too. Now, as Volkswagen comes clean about rigging diesel emissions to pass US tests, Rand is desperately trying to sell the fully loaded model with white leather seats for $10,000 below what he paid. His sole bite has been from a man who offered $7,500 on speculation that he could resell it in Mexico.

"Volkswagen was somebody that you could rely on for cutting-edge products and quality and all those things and now you find out that they're not above lying just flat out," said Rand, who plans to join a class-action lawsuit against VW. "That's probably about as bad a thing as a company can do is lie to your face when you're buying a $35,000 car."

Rand's anger at the world's top-selling car company was echoed Wednesday by private dealers, auto wholesalers and owners across the US as fallout from the smog test trickery mounted.

The US Environmental Protection Agency first disclosed Friday that stealth software makes VW's 2009-2015 model cars powered by 2.0-liter diesel engines run cleaner during emissions tests than in actual driving. On Wednesday, CEO Martin Winterkorn resigned and took responsibility for the "irregularities" found by US inspectors - a scandal that has wiped out billions in the company's market value and raised the possibility of criminal investigations and billions more in fines. 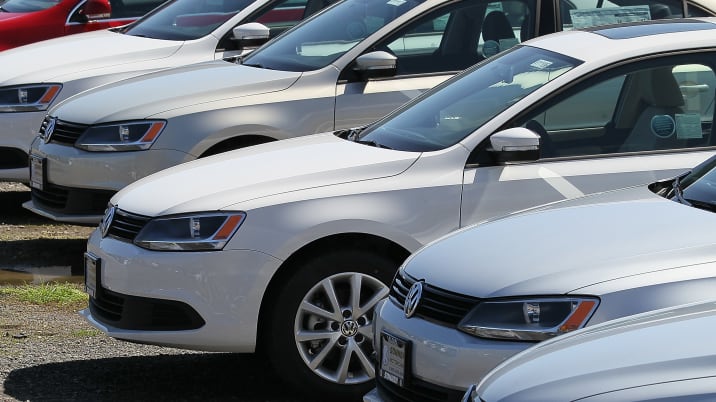 The revelations left dealers sitting on hundreds of diesel cars they could not sell. Many also dealt with a flood of angry calls, emails and tweets from Volkswagen owners who felt betrayed because they believed they had bought a car that polluted less without sacrificing the good gas mileage and performance that comes with a diesel engine.


"I think their feet should be held to the fire." - Joe DeCarolis

"I think their feet should be held to the fire. I think apologies don't mean anything when something is so premeditated," said Joe DeCarolis, of Cary, NC, who owns a 2012 TDI Jetta Sport Wagon — a car he bought after careful comparison shopping for its clean emissions and good gas mileage.

Dealers can't give customers good answers because Volkswagen hasn't said a whole lot, said AutoNation CEO Mike Jackson, the leader of the largest auto dealership chain in the US.

AutoNation's six Volkswagen and eight Audi dealerships in the US are telling customers that the cars are safe to drive and promising to call them as soon as they know more about repairs. "That's not adequate," Jackson said. "We need answers by next week."

A lot of people within VW had to know about the software that turned emissions controls on during government tests and off for regular driving, especially because the scheme went on for multiple years, Jackson said.


"It's a systemic failure." - Mike Jackson

Meanwhile, concern was growing at private dealerships about what to do with inventory that's now gathering dust.

At Volkswagen of Oakland, CA, nearly two dozen new diesel cars have no chance of being sold in the short-term, while 25 2016 model vehicles are being held up at the Port of San Diego because they can't pass emissions standards, sales manager Chris Murphy said. Customers have been calling and emailing to demand the dealership buy their cars back or offer refunds.

"We can't afford to buy all those cars back. We're just one dealer," he said, adding that diesel models make up about 30 percent of the business. "This is definitely going to impact our business. We're trying to focus on positive, not negative things because there's nothing we can do."

Volkswagen has taken steps to help out the dealership, Murphy said. That includes guaranteeing reimbursement for sales objectives for two quarters whether or not the goals are met and waiving the interest the local franchise normally pays on unsold cars on their sales floor, he said.

"They're making all the right steps. ... I'm just waiting for everything to get uncovered to see how deep this really goes. I'm not mad at anyone except the people higher up who made these decisions," Murphy said.

Lash Volkswagen of White Plains, NY, has been scrambling to accommodate affected Volkswagen owners by giving them loaner cars and picking up or dropping off their cars when it's time for repair, said Tom Backer, general manager of the dealership in New York's Westchester County.

Dealers, he said, were told that there will be both software and hardware changes to fix the problem. They're already on 2016 models and are awaiting approval from the Environmental Protection Agency, Backer said. Older models will get the same fixes, he said.

"What we say is, 'Let's wait a little bit and see how exactly this all shakes out,' " Backer said.

But not every Volkswagen dealer is fielding calls from angry customers.

Bill Haggerty, a sales manager at a VW dealership in the Chicago suburb of Oak Lawn, Illinois, said he hasn't heard concerns from customers so far. Diesels make up less than 20 percent of his business and draw the most interest from customers looking for better gas mileage, he said.

"We have 200 Volkswagens in stock; three of them are Jetta diesels," he said. "So, it's not like every Volkswagen out there has got a diesel motor in it. They sell an awful lot of cars with good gas mileage and great safety records.