Plus: Notes On The 2016 Honda Civic, Ford Focus RS, And GM's Ignition-Switch Deal We obsessively covered the 2015 Frankfurt Motor Show, and naturally, we selected our favorites from this fall's biggest automotive event. Now that the dust has settled, we're looking ahead to what it all means. Here are three takeaways from the floor in Frankfurt.

The Germans are serious about electric vehicles: It's a bit cliché to say BMW, Mercedes, and Audi have downplayed electrics in favor of other technologies, like diesels. For a time that may have been true, but those three companies, along with Porsche and Volkswagen, are emerging as leaders in EV development. That was on display in Frankfurt, when all of them revealed either all-electric or plug-in hybrid models. Gas prices are relatively low in the United States, but clearly the Germans are thinking long-term and globally.

Everyone is serious about SUVs: You gotta have one, even if you're Bentley or Jaguar. It's 2015 and it's what consumers want. As Jaguar design director Ian Callum put it, "Not to be in the sector would be a little naïve for the sake of purity." It's not just the flashy exotic luxury makers. Nissan showed the Gripz concept, which is rakish, radical, and meant to blend traits of SUVs and sports cars into a vehicle that really crosses over. Look for more, especially in the luxury sector, as Rolls-Royce, Lamborghini, and Aston Martin ramp up their own SUV efforts.

There's no ceiling to the luxury market: Speaking of high-end cars, companies are continuing to invest in extravagant wares beyond just SUVs. Even during the recession, ultra-luxury makers remained relevant, and now they're back at full stride. In Frankfurt, that was illustrated by yet another S-Class model, the cabriolet, which will come in S550 and S63 AMG variants in the United States. Ferrari also showed off the 488 Spider, and Lamborghini opened up the Huracan LP 610-4 Spyder. Meanwhile, Bugatti's Vision Grand Turismo concept reminded enthusiasts that it's plotting life after the Veyron. European auto shows always draw the glitziest reveals from luxury makers, and this year didn't disappoint.
OTHER NEWS & NOTES 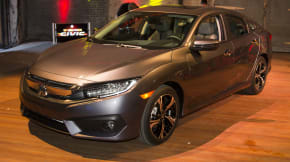 The 10th-generation of the Honda Civic debuted this week at events in Los Angeles and Detroit ahead of its launch in the United States this fall as a 2016 model. Honda fortified the Civic with LED lights, an available turbo engine, and a more tech-laden cabin. It rides on a new chassis, and the sheetmental has been aggressively restyled with more creases, boomerang-shaped taillights, and a raked roofline. The ambitious upgrades come in response to the outgoing car's lackluster reception. The sedan arrives first and will be followed by coupe and five-door hatch variants. The lineup will also eventually feature Si and Type-R performance versions. 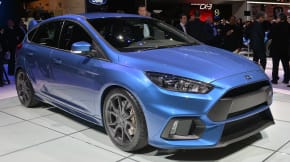 Hot hatch enthusiasts, this is what you've needed to know for months: The cost of the 2016 Ford Focus RS. It will start at $36,605 (including destination charges), and deliveries begin in North America next spring. The configurator is live now. The Focus RS will crank out 350 horsepower and 350 pound-feet of torque in our market from its 2.3-liter EcoBoost four-cylinder. Ford projects the hatch will hit 60 mph in around 4.7 seconds. Acceleration is aided by a light in the head-up display that alerts the driver when the car is at the ideal shift point of 5,900 rpm, and it flashes when the engine redlines. 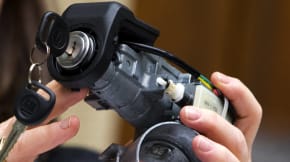 General Motors admitted wrongdoing and will pay a $900-million penalty, but will avoid federal prosecution for its mishandling of an ignition-switch defect in some of its older cars. GM must also accept independent oversight for its safety and recall operations. Under terms of the deal, authorities will defer prosecution for three years and then seek to drop the charges if GM abides by the terms. The company was formally charged Thursday with "concealing a potentially deadly safety defect" from NHTSA and "misleading consumers concerning the safety" of some of its cars. Meanwhile, GM also announced it will settle some civil cases filed in Michigan and New York courts related to the ignition-switch recalls, and will take a $575-million charge on its third-quarter financials to pay for the agreements.
Related Video: