View All Specs
1 Review
The first rule you learn about playing hide-and-seek is to wait until the seeker is out of sight before you move on to your next position. That feeling comes back to us as we're sitting in the Dinan-tuned 2015 BMW M235i on the twisty stretch of Route 152 near Gilroy, CA. Construction restricts the road to one lane before opening up to five miles of uninterrupted switchbacks. A local tipped us off to pull over and wait for traffic to clear, guaranteeing an open road and no risk of law enforcement seeking us out.

Our first turn behind the wheel of the Dinan M235i started just a few miles north at the tuner's engineering and development center, located in an unassuming office park south of San Jose. Dinan conversions are known for being simultaneously subtle and awesome; an enhancement of products that already stand out in their respective classes.

Dinan obtains its R&D cars through consumer channels, unlike some tuners that get early access to BMW's engineering for their own development projects. The development process is "reverse engineering," as technical director Casper van der Schoot describes it. Some development cars also come to Dinan through the generosity of its owner fan base. Customers hand over personal vehicles in exchange for discounted products. An M2 is already on order, and the Dinan engineers are on the edge of their seats waiting to take it apart. 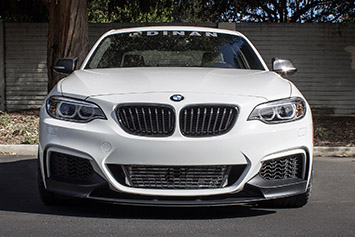 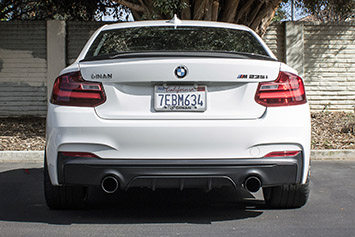 The Dinan treatment of the M235i increases performance without reinventing the dynamically sound package.

As with other Dinan cars, the treatment on the M235i increases performance without reinventing the dynamically sound package. Approved dealers can install the Dinan parts, as can "anyone with a modest amount of technical aptitude," according to van de Schoot. Dinan's approach is to extract more of the best aspects of BMW products before supplanting stock parts with its own. That's why the M235i, like all Dinan products, comes with the eponymous Dinantronics engine control unit that remaps and finds more power from the stock inline-six-cylinder engine. A bespoke carbon-fiber cold air intake and stainless steel free-flow exhaust system add at least 15 more horsepower. The most significant alterations in the M235i's engine bay are a Dinan-rebuilt turbocharger and larger intercooler, which help increase total output beyond 440 horsepower.

At this point you might wonder if all this untapped capacity is at BMW's disposal from the start, why does it take Dinan to release it? According to van der Schoot, it boils down to the average customer's need – or lack thereof – for raw, unadulterated power. Dinan is, "catering to a customer who doesn't necessarily drive a Mini unless he has an M5 alongside it." The same line of thinking explains why Dinan has yet to alter BMW's i products, including the exotic i8, though van der Schoot admits that it's "inevitable that we'll work on a hybrid BMW" at some point. 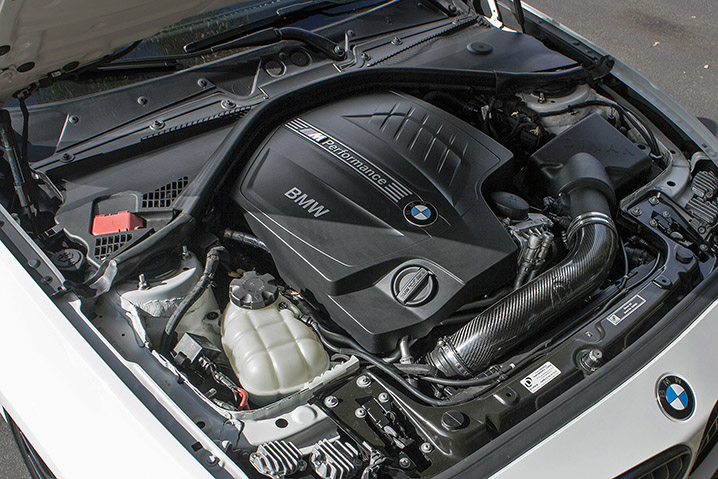 A deep burble from the free-flowing exhaust pipes that makes the inline-six sound sweet and crackly.

We expected the adjustments to the M235i to saddle it with the buckboard ride and raw emotion evinced in the 1-Series M Coupe, but to our surprise the ride and driving character remain smooth. Dinan does not change the BMW drive modes, from Eco Pro to Sport Plus, so the power upgrades apply to all driving situations. Switching on the Dinan M235i offers a surprising aural reward: a deep burble from the free-flowing exhaust pipes that makes the inline-six sound sweet and crackly. At idle the engine sounds lovely, but still loud enough to wake some sleeping neighbors.

We hit the road in search of the coastline, about an hour west, until we hit the construction area on Route 152. Oh, and the aforementioned tip? It paid off. 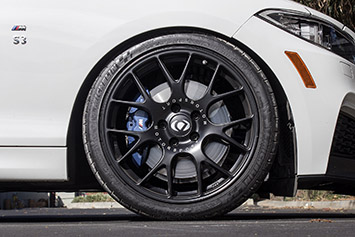 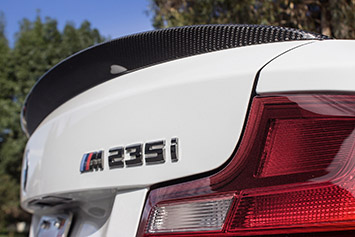 The immediacy of the forward thrust is reminiscent of supercharged power.

Stepping hard on the gas pedal from a standstill challenges the longitudinal grip of the super-sticky Michelins. Power arrives instantly but without making the M235i lurch, and the eight-speed automatic transmission buffers torque in a way that the 1M's manual gearbox was simply unable to do. Still, it's all too easy to chirp the tires, thanks to the surge from the Dinan turbo system. Dinan doesn't make official claims of 0-60 times, but we can guarantee that it's faster off the line than the 4.6 seconds BMW quotes for the stock M235i.

In fact, the Dinan M235i is so quick off the line that struggled to hit the redline before blowing past local speed limits, even in first gear. The immediacy of the forward thrust is reminiscent of supercharged power, and that force is available through the entire rev range. We kept on the throttle, braving hyper-legal speeds to hear more of the turbo whoosh and delightful exhaust note.

After the first few minutes in the driver's seat, the Dinan M235i feels like the honest performance coupe that we've missed since the 1 Series M. As the miles wore on we learned to the appreciate the power band, which is always strong but hits a higher level above 4,000 rpm. And Dinan managed to enhance the attributes that make the stock M235i so likable. The steering retains the light but precise weight of the original car, but with even more accuracy from the revised suspension and new tires. Braking performance is linear, predictable, and strong. 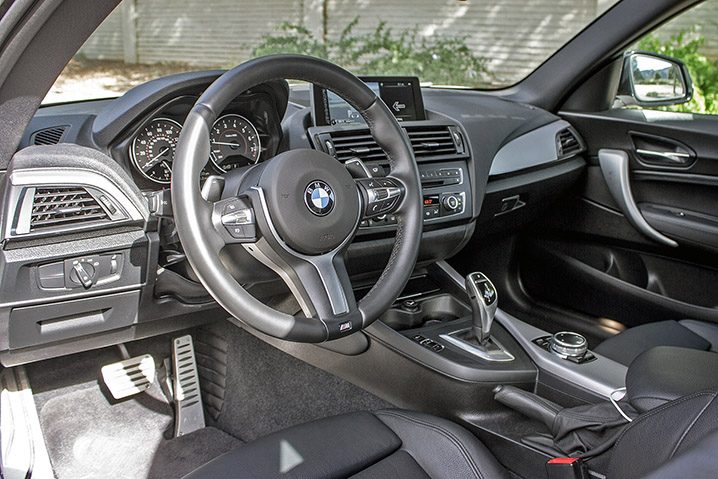 The M235i entered each corner and happily scurried out of it.

Driving through the ups and downs of the mountain grades, and into the industrial town of Watsonville, the M235i enters each corner and scurries out of with a cheerful urgency. In less confined settings it's easy to imagine the rear-wheel-drive coupe as a drift machine.

When we reached the beach, plenty of eyes were on the burbling, gurgling Dinan M235i, but the four-wheeled rolling sculpture of chiaroscuro seemed so out of place. Where this Dinan product belongs is a twisty road, so we set off to return Dinan HQ – immediately behind an RV that was braking through each ascending corner. Life has its pitfalls, but the rewards are so much more pleasant.

Several hours behind the wheel of the Dinan M235i is a pleasant experience, devoid of the dynamic turbulence and tinnitus acquired after mere minutes with the 1M. Van der Schoot is the first to admit that the M235i is not as extreme as the 1M – "but it's close!" – and it's his current daily driver of choice. 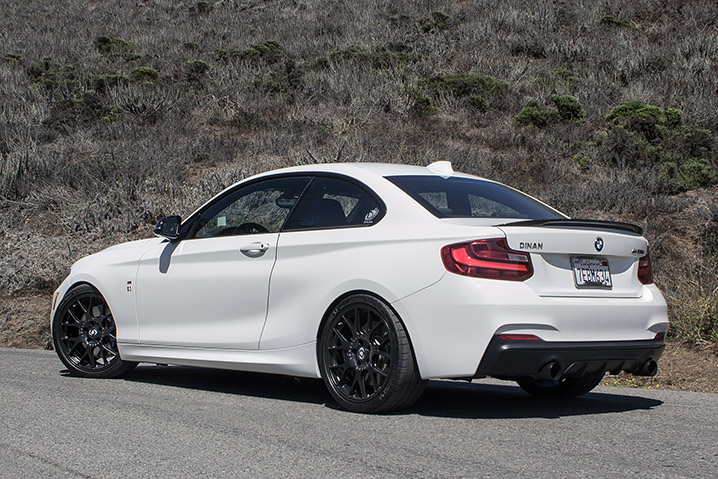 Is the total cost of the upgrades on our test car worth the 30-percent premium? Absolutely. Dinan parts are available a la carte, although you'll want to stick to their "stages" that Dinan recommends. Our S3 test car included the Dinantronics ECU ($3,249), a free-flow exhaust ($1,799), cold-air intake ($599), twin-core intercooler (approximately $1,000) and turbocharger (approximately $2,500). Expect to spend approximately $1700 for the suspension upgrades and up to $500 for accessories like bespoke floormats and aluminum pedals. All told, we estimate the price of our test car at a hair or two over $60,000.

As BMW's M cars become more disconnected from the driving experience (if not more capable than ever before), the Dinan M235i brings out the best traits that make BMWs so loved by enthusiasts. If you've hidden away the cash to spend on Dinan's enhancements, you'll be happy with the results. 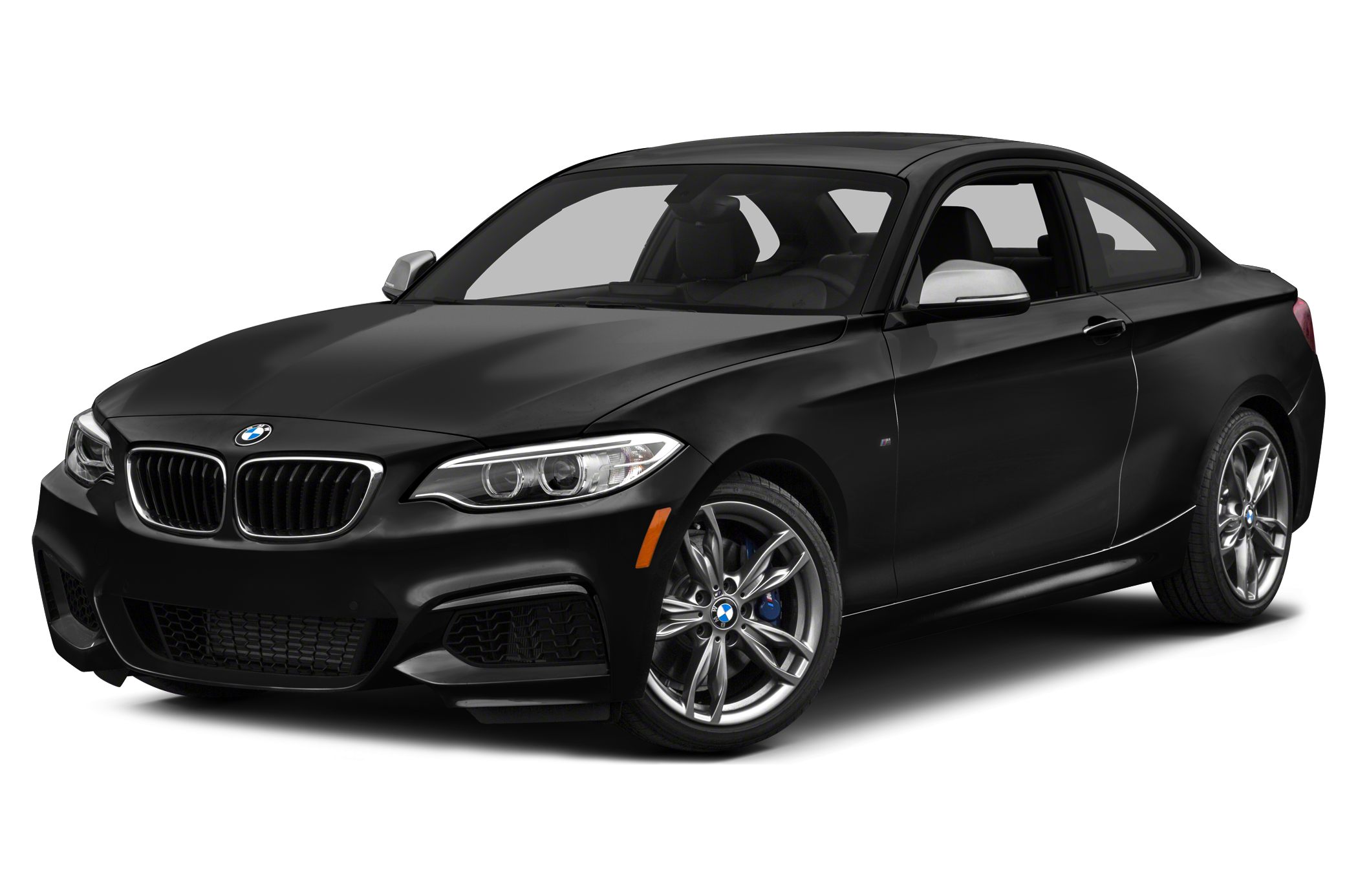