Pete Bigelow
Drunk drivers kill approximately 11,000 people every year in the United States, a level of carnage that remains stubbornly high despite enormous resources expended by law enforcement officers and safety advocates intent on stopping them. One possible solution now lies in the palms of their hands.

Quite literally; advances in sensor technology have allowed an Ontario-based startup to pioneer an interlock device that measures a driver's blood alcohol content through the skin of their hand. The device is innovative, in that it allows for continuous testing while driving and immediately sends results via GPS to fleet managers, police departments, or family members.

Company officials exhibited the biosensor-based technology at the Governors Highway Safety Association's annual conference earlier this month, and on Monday, Sober Steering was named one of the Top 10 Automotive Startups by organizers of the L.A. Auto Show's Connected Car Expo. Of the companies chosen, it was the only one focused on automotive safety.

"If there's no alcohol, you drive away normally. If there's alcohol, the bus is immobilized. You can have heat. You can have electricity. You just can't move the vehicle." - Catherine Carroll


Catherine Carroll, CEO of Sober Steering and a former JP Morgan banking analyst, didn't actually learn to drive until her mid-20s and would often serve as the designated driver for her friends. From that vantage point, she knew how a lack of accurate information could lead to tragic consequences. "I was out with my own friends one night and the usual 'I'm fine, I'm fine,' discussion started," she said. "It dawned on me how often this conversation happened. ... The mental math to determine whether or not you're 'fine to drive' is fundamentally flawed. If you've had enough drinks to be debating the issue, you're not in a good position to make good decisions."

After five years in development and a pilot project on a school bus fleet near the company's Waterloo, Ontario headquarters, the arrival of the device on the market comes at a fortuitous time. Federal officials have increasingly eyed interlock technology as a lynchpin in their efforts to combat drunk driving. Studies show interlocks are effective in curbing repeat offenses, and the use of these instruments tripled between 2006 and 2013, the latest year for which federal data is available.

Even with that increase, only about 20 percent of the 1.4 million drivers arrested for driving under the influence are either eligible for or compelled to use interlocks. Once interlocks are removed, DWI repeat offenses return to their pre-interlock rates, according to a 2014 report issued by the US Government Accountability Office. More than half of US states do not require interlocks for first-time offenders, according to the National Highway Traffic Safety Administration, which has funded research into interlock technology. Car companies have also invested in technologies that would thwart drunk drivers, such as a system from Nissan that combines alcohol odor sensors, facial-recognition software and driver-behavior monitoring. 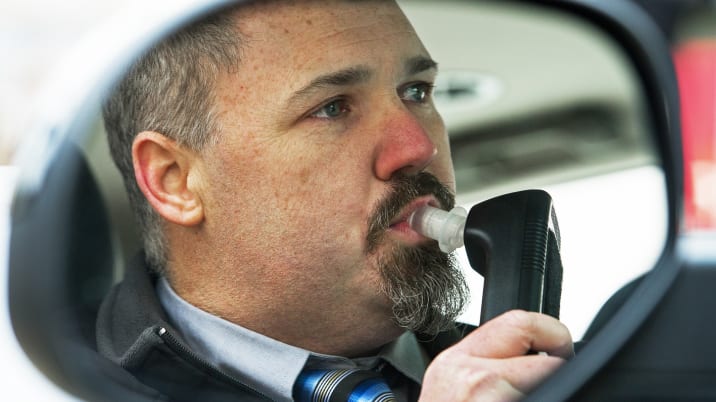 Sober Steering didn't receive funding in the US, so Carroll moved the company from Florida to Ontario, where she garnered interest and eventually funding from the Canadian federal government and Ontario provincial government. Working with her father, John Carroll, the company's chief technology officer, the two built upon applications from medical science and created the biosensor, which can detect alcohol gases through the skin within five minutes of ingestion. Though she said the product was cheaper than a traditional interlock, she did not disclose pricing.

Aside from measuring alcohol content via gases emitted from the skin rather than breath, Sober Steering's product, called the Zero Tolerance System, is different from other interlock products in two distinct ways. One, drivers can conduct ongoing tests seamlessly as they drive with a swipe of the palm across the devices, which can be retrofitted onto existing steering wheels. With traditional interlocks, such as the one pictured below, drivers need to pull to the side of the road for en route testing.

"A lot of fleets wouldn't do that, it's too much of a hassle, getting on and off a highway," Carroll said. "But in the steering wheel, it's very easy to test while your driving, and you don't have the issue of having to blow into the Breathalyzer."

"If you've had enough drinks to be debating the issue, you're not in a good position to make good decisions." - Catherine Carroll


Should a driver fail a test with the vehicle in motion, it's not immediately immobilized, for obvious safety reasons. Rather, a message is immediately sent via GPS alerting a dispatcher or other designated recipient that alcohol has been detected. Monitoring of failed tests in traditional interlocks is typically reviewed every one to two months, according to the Coalition of Ignition Interlock Manufacturers, a trade group that advocates for implementation of state interlock programs.

Though the Zero Tolerance System is initially marketed toward fleets, it could also be installed for individual drivers. And as safety advocates call for interlocks to be mandatory equipment on all new cars – an idea that has gained more traction outside the United States than within – its relatively small footprint would fit with existing steering-wheel designs.

It isn't a traditional ignition interlock. Rather, it's a transmission interlock, a design solution that accounts for the fact more motorists are using remote-start devices.

"Otherwise, it works like any other interlock," Carroll said. "If there's no alcohol, you drive away normally. If there's alcohol, the bus is immobilized. You can have heat. You can have electricity. You just can't move the vehicle. In the end, we want to make sure people are safe."