Boldly Going Where No RX Has Gone Before

View All Specs
Add a Review
There is no more important model line to Lexus than the RX. Year to date, with a replacement on the way, the RX accounts for 28 percent of the brand's sales. It's the undisputed champ of the midsize luxury SUVs, nearly outselling BMW's entire SUV lineup. So when it came time to push a significant update to its best-seller, Lexus put the whole of its engineering might into the challenge. The 2016 RX represents the very best that Lexus is capable of, specifically when its spindle-shaped grille is pointed at its core audience.

Starting with the basics, Lexus increased the exterior dimensions. Wheelbase grows just under two inches while overall length goes up by five. But overall interior space remains exactly the same at 139.7 cubic feet. Rear-seat passengers get extra space – head, hip, and legroom all nudge up slightly for 2016 – but it comes at the expense of cargo area, at least on paper. Whereas the 2015 RX offered as much as 80.3 cubic feet of storage space with the rear seats folded, the 2016 model cuts that by a quarter to 56.3 cubes. Lexus representatives say that cargo space is up, and the numerical reduction is due to different measurement methods. The 450h's cargo area is smaller by a negligible half cubic foot due to the location of the car's battery pack. 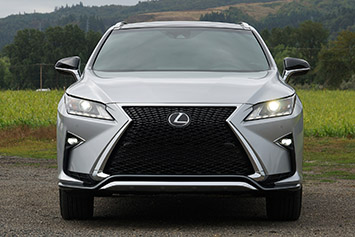 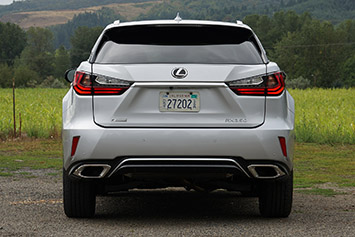 RX buyers and their friends enjoying the more spacious back seat are going to look considerably more stylish in 2016. The new RX looks seriously chiseled, with sides creased and cut to the point that there's hardly any flat surfaces. It's hard to pick favorite details, but we really like the upward-kick of the rocker panel.

At the front lives Lexus' ubiquitous spindle grille, more exaggerated than ever before and rimmed by a strip of thick chrome. Sharp lines dominate the rest of the fascia, from the slit-like headlights to the arrowhead-shape that surrounds the fog lamps. There is a premium lighting package that includes LED lamps everywhere not to mention awesome sequential turn signal indicators in the taillights. UPDATE: It turns out the awesome sequential turn signal indicators aren't going to be available in the United States, which is a big bummer. 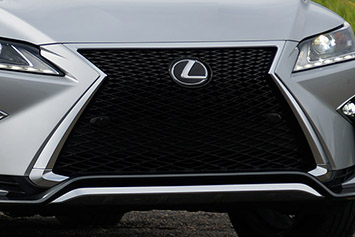 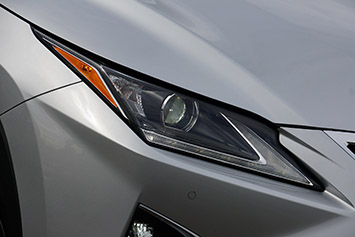 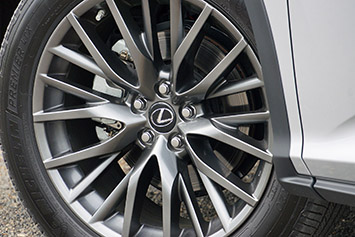 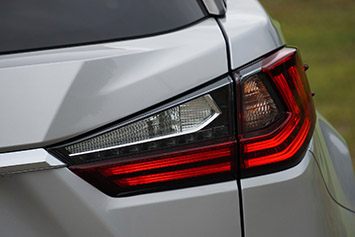 If the floating roof looks familiar, that's because you've seen it on the Nissan Murano.

Somehow the massive proportions of the trademark Lexus grille is not the most controversial styling element of the new RX. Instead it's the floating roof, otherwise described as the blacked-out space in the C-pillar area. If it looks familiar, that's because you've seen it on the Nissan Murano, but the way the RX roofline swoops down seems more bold.

Aside from the taillamp clusters we don't find much visual interest at the rear of the RX, but one piece of tech catches our attention. With the key on your person, you can open the tailgate simply by hovering a hand or elbow over the Lexus emblem. There's a learning curve that make this trick work with consistency, but once that's figured out the system works quite well. Watch us demonstrate the hands-free tailgate in the video below.

The RX retains the old-style, mouse-like joystick to control the infotainment system.

Buyers who really want to stand out from the crowd can choose optional 20-inch wheels with colored inserts in titanium (dark gray), black, pearl white, or copper. Eighteen-inch wheels are standard, and no matter which size you choose, you'll get Michelin Premier LTX tires that boast hidden grooves that open up as the tire ages. These grooves expand as the tread wears and are designed to extend the life of the tires.

Sitting inside the 2016 Lexus RX you're surrounded with high-quality surfaces, including supple leather available in several different colors. We like the Rioja Red (an F Sport-exclusive interior color) of the RX 350 you see in our image gallery. Another highlight is the laser-etched Gray Sapele wood and aluminum trim featured in the Luxury Package that you'll see in the video below. Keep watching for a quick rundown of the new Premier LTX tire technology from Michelin.

The RX is seriously quiet inside.

Besides the head-up display, the 2016 RX has a massive 12.3-inch LCD screen nestled in the center of the dash. It integrates well into the cabin, unlike the tacked-on feel of recent designs by BMW and Mercedes-Benz. Lower-end RX models get a smaller, eight-inch screen with way too much surrounding black plastic. If you can afford it, go for the larger display.

The RX retains the old-style, mouse-like joystick to control the infotainment system - we've been spared the horrible touchpad found in the NX. Models with the eight-inch screen are stuck with a Display Audio joystick that has neutered functionality and a less immersive experience. Another feature high on the want list an available 360-degree Panoramic View Monitor that helps the driver judge his distance from nearby obstacles at low speeds and when parking.

The RX is seriously quiet inside. Additional body welds and adhesive bonding agents work with more steel gusseting to make the unibody chassis stiffer than before, and aerodynamic tweaks keep wind noise to a minimum. Audiophiles will appreciate the optional Mark Levinson 15-speaker package, though we doubt most drivers will be disappointed with the base audio package. 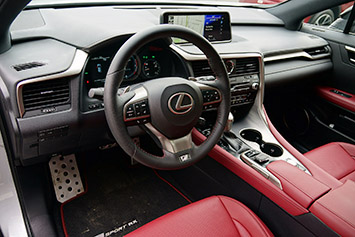 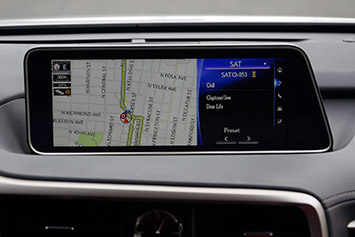 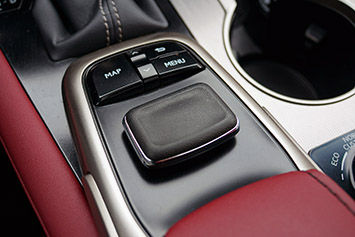 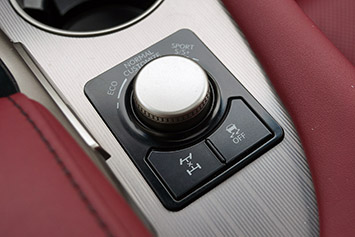 Total system power for the RX 450h comes in at 308 horsepower.

While the RX 350 AWD has a traditional transfer case, in the hybrid version there's no physical connection to transfer power from the front wheels to the rear in all-wheel-drive trim. Instead, power from the hybrid's nickel-metal-hydride battery pack is diverted from the front motors to the rear, providing on-demand power at all four wheels. And as with other Toyota and Lexus hybrids the RX 450h has an EV mode, should battery charge allow.

The driving character of the two cars differs, though, even if the acceleration numbers don't. Hybrid models feel quicker off the line, thanks to the instant torque of the electric motors, while the gasoline model builds speed more quickly as the revs rise. Perhaps it's the supremely quiet cabin in the RX 450h, but we can't remember another Lexus hybrid with such a noticeable gasoline/electric transition. The way the gasoline engine kicks isn't a deal-breaker, but the abruptness stands out against an otherwise smooth experience. 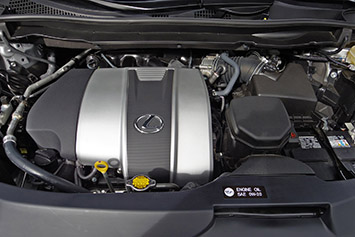 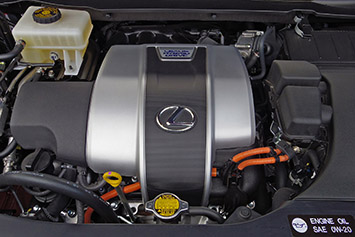 F Sport is no longer merely an appearance package.

All RX models have a Drive Mode Select controller with settings for Normal, Eco, and Sport. These presets do exactly what they say, by either quickening or softening throttle response and steering. In Hybrid models the digital gauge in the instrument cluster switches from a power meter to a sportier tachometer in Sport mode.

F Sport versions add an extra Sport+ setting to Drive Mode Select that stiffens the adaptive suspension dampers and, in RX 350 models, holds gears during hard cornering. Hybrid F Sport models don't shift while cornering because they use a continuously variable automatic transmission instead of the 350's eight-speed unit.

Switching into Sport+ from Sport provides a meaningful change in the RX's attitude, and it helps cement the F Sport model's performance credentials in a way previous Lexus crossovers never even attempted. Put another way, F Sport is no longer merely an appearance package. This is good news, and it points to a strategic shift for future of Lexus models. According to the brand's internal metrics, F Sport attracts more male buyers and more conquest buyers than its standard RX, and that represents potential growth at the expense of German competitors like Audi, BMW, and Mercedes. Which is is the likely direction that Lexus wants to take the rest of its lineup. 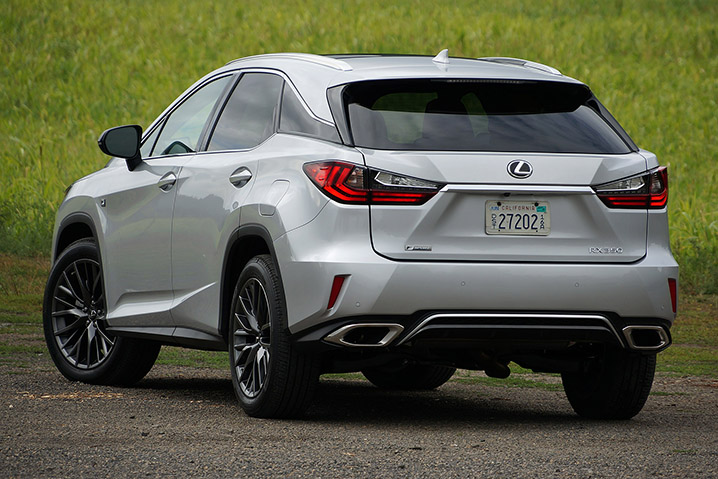 Contrary to the brand stereotype, the RX is serene without being boring.

Don't take the F Sport's target of conquest sales as a sign that Lexus is ignoring its traditional customer base with the 2016 RX. The powertrain, suspension, and driving dynamics all lean toward the comfort side of the luxury SUV spectrum. The RX is quiet and composed at all times. But contrary to the brand stereotype this vehicle is serene without being boring.

That last part is an important distinction. Lexus doesn't want the RX to sell merely as the most rational choice on market. Sure, the F Sport's aggressive looks and sportier driving will stir the emotions of some crowds, but even the classic Lexus customer will find character in the new RX. The challenge for Lexus is to satisfy these seemingly disparate buyers and continue dominating this corner of the market. As difficult as that may be, the 2016 RX might just be able to make that happen.

$1,844 - $2,562 Nat'l avg. savings off MSRP
See Local Pricing
I'm not in the market for a vehicle at this time. Please move this suggestion to the side for 30 days.
Huge Savings