Following my earlier Chevy Cruze Diesel trip and recent press-launch drives of Volvo XC90 and Hyundai Sonata plug-in hybrids, an opportunity arose for another road trip. I wanted to do it in a plug-in hybrid, primarily to learn whether its higher price vs. gas-powered and conventional hybrid versions of the same vehicle – is justified by its capability to operate as an EV, burning no fuel at all with its engine off, at least for short distances.

As I've written before, I've been skeptical of plug-in parallel hybrids because they are generally good for very limited electric miles (typically 10-15, depending on driving style, terrain, and temperature) at fairly leisurely speeds before their engines kick in. But I've recently spent time in two new examples – the 2016 Volvo XC90 T8 and the 2016 Hyundai Sonata PHEV – that offer more EV range, mostly because they tote bigger (thus more expensive) batteries. Both promise 24-25 miles of battery-only range, and the latter can recharge on the fly.

Unfortunately, neither was yet available for my July road trip, nor was a Honda or Toyota plug-in, but Ford anted up a Fusion Energi borrowed from its Marketing department. "The state-of-the-art lithium-ion battery and electric motor combined with the gasoline engine offers maximum efficiency," says Ford about it. "This strategy offers the best of both worlds, providing the 2016 Ford Fusion Energi the capability to be driven as an electric vehicle for short trips and as a hybrid for longer trips." 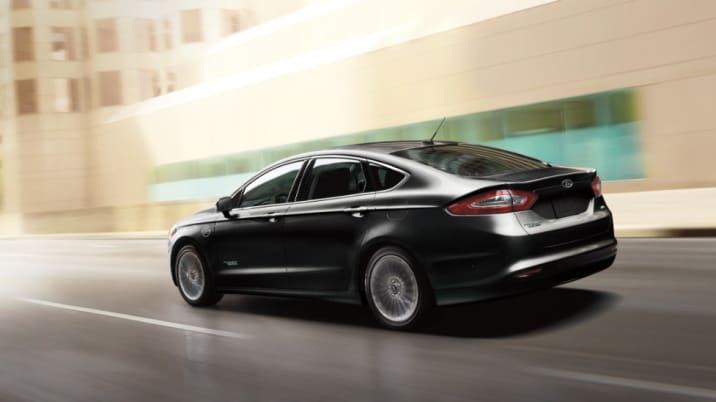 I've been a fan of Ford's Fusion since the first-generation debuted a decade back, and the handsome Gen II version launched for 2013 has been Detroit's best answer to the Honda Accord/ Toyota Camry/ Nissan Altima Japanese juggernaut in the popular US mid-size sedan segment. Beyond its leading-man looks, it offers an array of highly-functional features (some exclusive), a choice of three gas engines (a base 2.5-liter four and 1.6-liter and 2.0-liter direct-injected, turbocharged EcoBoost fours) and both parallel and plug-in parallel hybrid versions.


The regular hybrid originally boasted 47 mpg before Ford adjusted it to be more realistic.

The gas engines drive through a 6-speed automatic transmission (a 6-speed manual is standard with the 1.6-liter EcoBoost), the hybrids through an electric continuously variable transaxle (eCVT), and all-wheel drive is available with the 2.0-liter EcoBoost four. The regular hybrid originally boasted 47 miles per gallon in the city, 47 on the highway and 47 combined EPA ratings before Ford retested, apologized and adjusted them to a more realistic 41/44/42. Both hybrids marry a 141-hp 2.0-liter Atkinson-cycle gas 4-cylinder to an electric motor powered by a lithium-ion battery, and the bigger-battery Energi plug-in will run for double-digit miles on electric energy only.

The major downside is that bigger batteries bring higher prices. The Fusion Energi with its 7.6-kWh pack starts at $35,730, $10,000 more than its standard (1.4-kWh) hybrid stablemate (partly because it's available only as a top-of-the-line Titanium model) and $13,000 pricier than a base gas-powered Fusion. Our borrowed example, loaded with nearly $6,000 worth of options, stickered for an eye-opening $42,460. Another disadvantage is limited cargo capacity. While gas-powered Fusions boast a 16 cubic-foot trunk, the plug-in Energi's is a much smaller 8.2 cu. ft. due to that hefty, bulky battery. 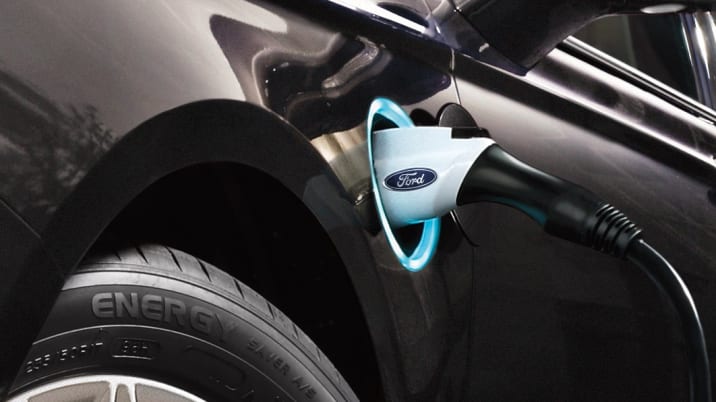 Among the many available features are a lane-keeping system that vibrates the steering wheel if you start drifting out of your lane, then applies corrective steering pressure if necessary and alerts you if it detects drowsiness or erratic driving. Adaptive Cruise Control adapts to slower traffic and provides brake support if it detects a potential crash, a Blind Spot Information System (BLIS) with cross-traffic alert warns of vehicles in blind spots, and Active Park Assist identifies suitable parking spaces and steers into them while you do the pedals.

Our destination was Branson, MO to spend a few days with family. Those who have ventured there know it's a very touristy town offering multiple shows and attractions and visited (at least while we were there) mostly by a mix of retirees and families with kids.


The car said, "Thank you for driving a hybrid."

We departed with a full battery, an indicated EV range of 18 miles and a predicted total range of 542 miles, and drove the first 15 miles electric-only before the battery was down and the engine joined in. We refueled at 393 miles (with an indicated 61 miles of range remaining, for a total of 454, not 542) and overnighted west of St. Louis at 502 miles, averaging 36.2 mpg at mostly brisk freeway speeds. The Driver Information Center (DIC) told us that 71.5 miles had been driven on electric energy (engine off). It also said, "Thank you for driving a hybrid."

With no plug-in opportunity, we would have to continue in the morning with normal parallel hybrid (no EV-only) power. And we spent an exciting evening watching local TV tracking major storms with high winds, hail, and tornado warnings passing over and around us.

We fortunately found no hail dents or tree prints in our Fusion in the morning, refueled again at 745 miles and pulled into Branson at 798 miles (143 of them electric) averaging 36.2 mpg. There was no Level 2 charger where we stayed, but they offered an outdoor 120V outlet. An LED ring around the charge port blinked to show it was charging and graphically indicated approximate SOC. Our battery would need 6.6 hours to fully charge at 120V or 2.7 at 240V. 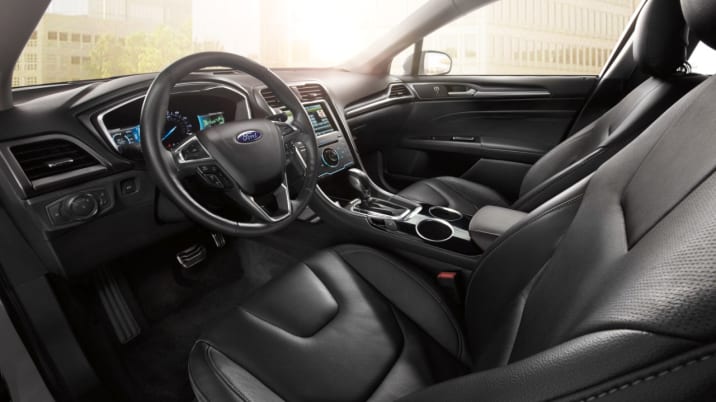 Driving locally for the next four days, mostly on battery power, boosted our total trip fuel economy to 37.2 mpg. The outdoor plug was dead for our last night there, so we departed in the morning with just 10 miles projected EV range (which were quickly used up in four local and five freeway miles) and 372 miles total range.

We drove home straight through with two more gas stops and averaged 36.6 mpg over our total trip distance of 1,623.5 miles. The DIC said nearly 305 of those miles were electrically powered (really?), and we spent $101 on gas - a bit over $.06/mile) – not bad for a well-equipped mid-size sedan at mostly fast freeway speeds. Yet well short of the car's 44-mpg highway or its 42-mpg combined EPA rating.

We drove it locally for the next few days, recharging between trips, and noted 99.9 mpg (zero gas burned) on one electric-only trip and 56.5-mpg average for a 24.5-mile jaunt that started on electric and finished on hybrid power. This kind of short-range driving is where a plug-in hybrid can really shine, much more than on longer trips.


The Fusion PHEV is a crisp-handling, smooth-riding, occupant-coddling road-trip ride.

The Fusion PHEV is a crisp-handling, smooth-riding, occupant-coddling road-trip ride, and its active noise control (through the audio system) tunes out most road and powertrain noise. We found its performance mostly adequate despite the eCVT's rubber-band response and liked its informative DIC and instrumentation. Not so much its voice recognition or the MyFordTouch infotainment touchpads, which are too small to hit accurately on the move.

Most importantly, if there is a next generation – PHEVs are not hot sellers – it needs better battery packaging to preserve family-trip trunk room (we had luggage in the back seat) and charge-on-the fly capability at cruising speeds to enable some lower-speed battery-only operation between plug-ins. That would be a net energy loser (consuming more gasoline energy than the electric energy it generates) but a welcome convenience when desired.

Is its plug-in capability worth its substantial added cost. As with an extended-range EV, we love being able to drive the first few miles without burning any fuel. But for longer trips, or for gasoline dollar savings over several years of ownership, probably not. 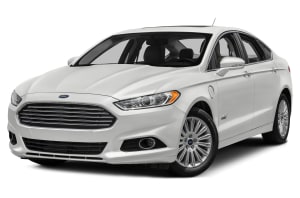