​2015 Belgian Grand Prix is a return to scheduled programming With summer intermission over, the second half of the Formula One season commenced in the Belgian countryside at Spa-Francorchamps. After qualifying, it looked a lot like the first half of the season with just a few minor changes. Lewis Hamilton was even more dominant in his Mercedes-AMG Petronas than usual, regularly taking half a second out of his teammate in just the middle sector of the circuit. Teammate Nico Rosberg tightened it up a tad for his final hot lap, but Hamilton still took pole by 0.45 seconds ahead of Rosberg in second.

With his Williams back at a power track, Valtteri Bottas got himself up to third, although more than a second behind Hamilton. Romain Grosjean in the Lotus in fourth had his best qualifying performance since his fourth-place grid spot at the 2013 US Grand Prix. This was a huge boon for Lotus, the team facing another financial issue off track that threatened to have its cars impounded as soon as they left the circuit. Grosjean had to have his gearbox changed before the conclusion of six races, however, so the five-spot penalty meant he'd actually line up ninth for the race.

Sergio Perez put the Sahara Force India in fifth, where we're more used to seeing his teammate Nico Hülkenberg, just ahead of Daniel Ricciardo in the Infiniti Red Bull Racing in sixth. Felipe Massa got the second Williams in seventh, in front of the second Lotus of Pastor Maldonado in eighth. Then came the first and only Ferrari in the top ten, Sebastian Vettel qualifying ninth after a disappointing Saturday for the scuderia; teammate Kimi Räikkönen suffered gearbox issues and qualified way down in 16th. Carlos Sainz took tenth in the Toro Rosso.

A new start procedure in Belgium meant drivers had to handle clutches on their own, without the engineers finely tuning bite points between the garage and the start line. That was in conjunction with another rule limiting the kinds of radio messages possible between engineers and drivers, aiming to put more of the car in the drivers' hands. 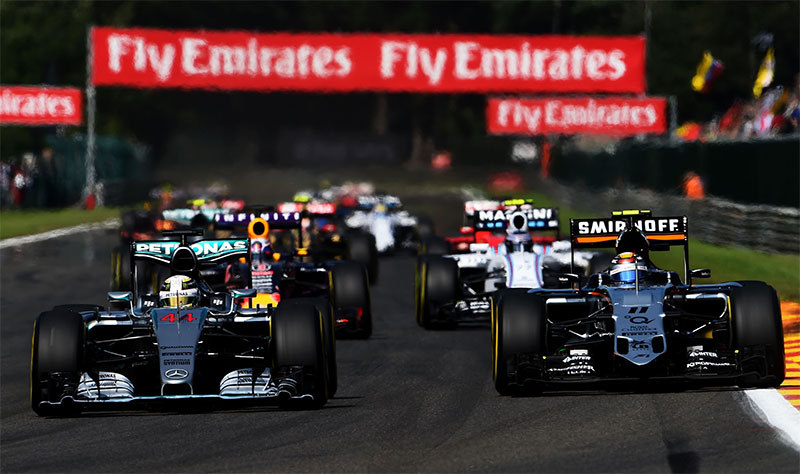 After an aborted start when Hülkenberg's car quit while sitting on the grid, Hamilton made the most of the new procedure. His start wasn't amazing but he beat everyone else off the line, while those behind were alternately getting bogged down or leaping ahead. Midway through the first lap the top ten was Hamilton, Perez, Ricciardo, Bottas, Rosberg, Vettel, Maldonado, Grosjean, Massa, Marcus Ericsson. At the end of 43 laps, Hamilton would still be in the lead. The Brit didn't lead a single lap of the last race in Hungary, the first time that's happened in 18 races, but this time he only gave up his lead during pit stops. Rosberg claimed second after another solid drive and another well-timed pit stop by Mercedes. 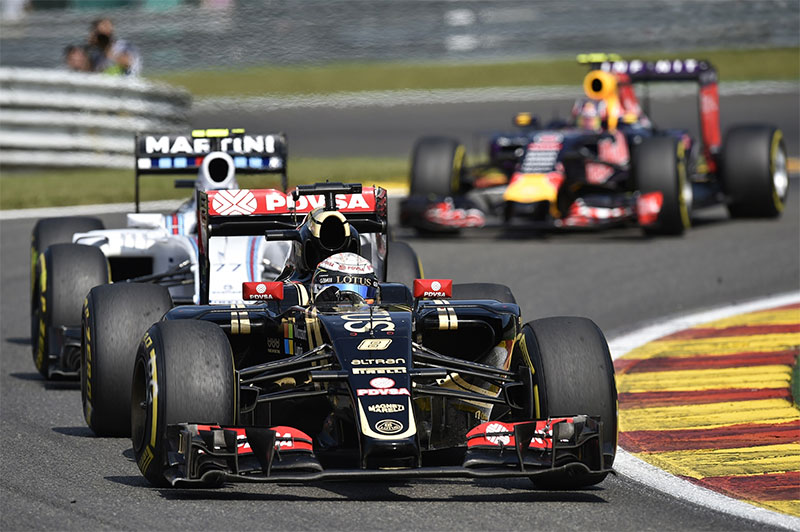 Grosjean kept the good times going at Lotus by finishing third, his first trip back to the podium since the 2013 US Grand Prix. Starting ninth on the grid after his penalty, he quietly worked his way through the field: seventh by Lap 5, fifth by Lap 15, fourth on Lap 18. He started stalking Vettel in third by Lap 33, and the question was whether he could catch and pass the German in ten laps. He got to within a second nine laps later, the last lap of the race. The question of passing was answered on Lap 42 by Vettel's right rear Pirelli, which disintegrated just after Raidillon at the top of Eau Rouge. Grosjean swept around, Vettel couldn't do anything but limp around the track and steam about a lost podium. 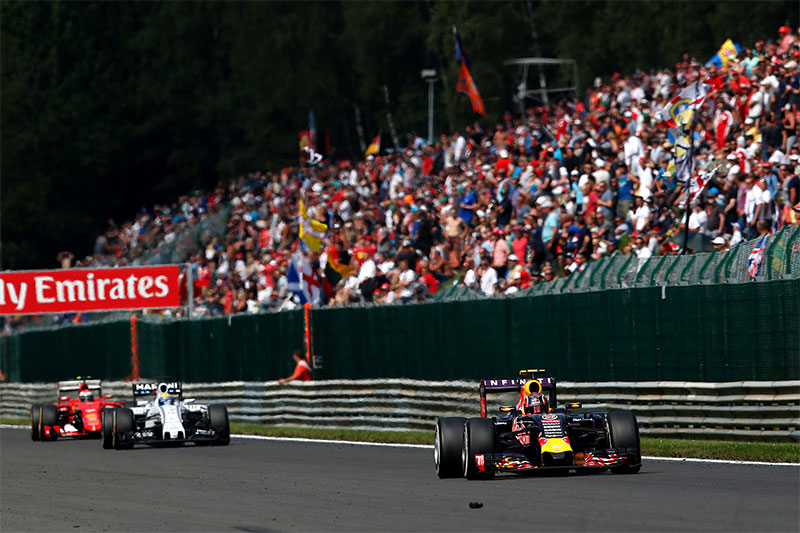 Daniil Kvyat, who qualified in 12th, flew the banner for Red Bull again with fourth at the flag, the Russian taking excellent advantage of a pit stop on Lap 28 for new soft tires. He'd been in fifth place before the stop, but Perez behind was catching him at more than a second per lap. Emerging from the pits in tenth, the new rubber gave Kvyat the pace to cut through the six drivers ahead on a track where passing is hard. The placing rescued the day for Red Bull, after teammate Ricciardo retired on Lap 21 with what the team thinks was an ERS issue.

Perez salvaged some good vibes for Force India by finishing fifth. The Mexican led the race for a few hundred meters on the first lap, getting his nose ahead of Lewis Hamilton on the run down the Kemmel Straight. It seems with Force India, though, that every weekend it has to choose which car it wants to perform well. The chassis is strong, and the team would be much further ahead if it could convert that strength into the kinds of races both cars and drivers are capable of. Grosjean's third place allowed Lotus to leapfrog Force India in the Constructor's Championship. 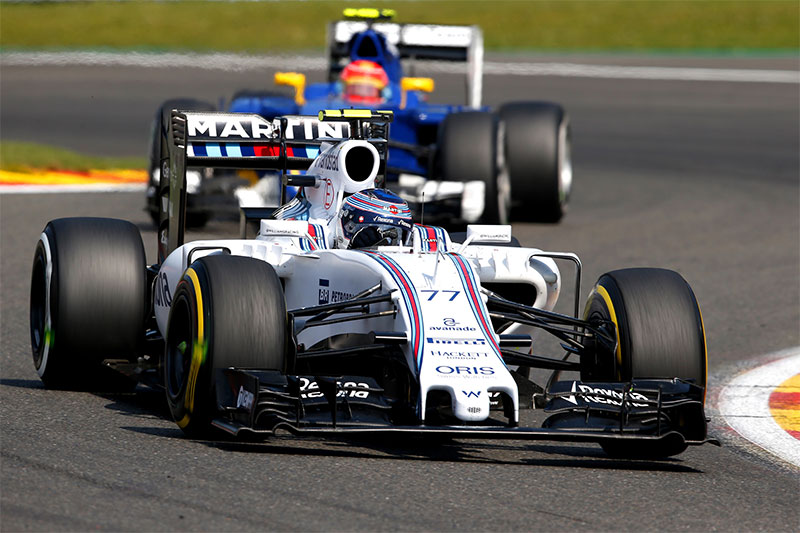 Massa brought the first Williams home in sixth. The Grove team had a couple of issues on the day, the first being that it couldn't convert its qualifying speed into race speed. Massa did well to climb a spot, but the team undoubtedly wanted more from a track that suits its strengths. Teammate Bottas had a bigger issue when the team put two different tire compounds on his car at his first pit stop – three soft tires and one medium. Stewards gave him a drive-through penalty – but he stayed on the mismatched tires – and there wasn't enough in the car on the day to do better than ninth place.

Räikkönen, recently signed to another year in the sport, suffered another 'what could have been' weekend. After the Q2 problem and gearbox change left him 16th on the grid, a seventh-place finish isn't a bad race but he's always got too much to do on race day to show what he and the car can really do. 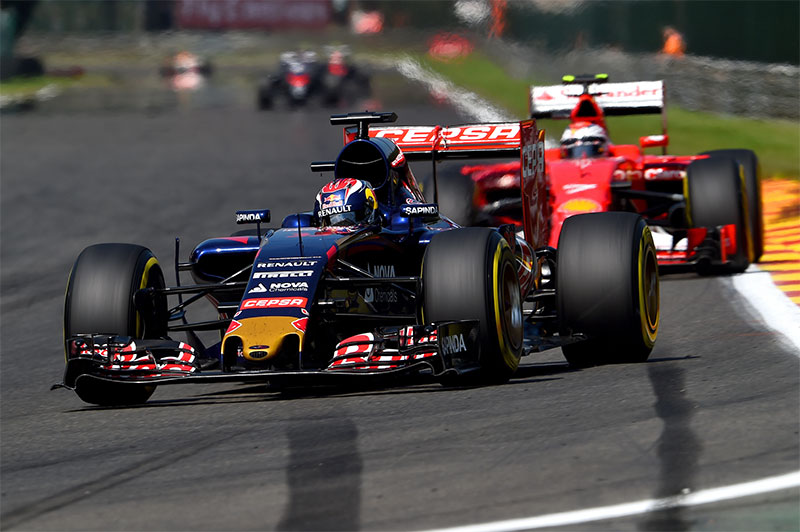 Max Verstappen beat Räikkönen's nine-place climb, Toro Rosso's Dutchman advancing from 18th on the grid to finish eighth. The way he spent all of Lap 10 lining up Felipe Nasr in the Sauber, starting his pass on the outside of Blanchimont and finishing it with some late braking into the final chicane was excellent racing. Marcus Ericsson drove a thoroughly quiet race to secure the final point for Sauber in tenth. 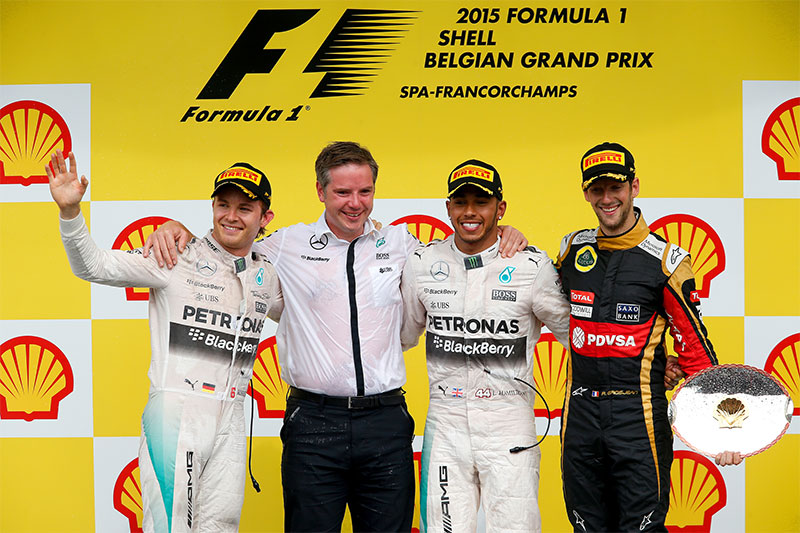 Hamilton's win is his 39th, the podium his 80th, and gives him 227 points in the Driver's Championship to Rosberg's 199 and Vettel's 160. The seventh Mercedes one-two of the season means they have 426 points in the Constructor's Championship, followed by Ferrari with 242 and Williams with 161. The next race is two weeks away in Monza, we'll be back then.