UPDATE: A Volvo spokesperson confirms that the company is preparing a recall for all seven-passenger 2016 XC90 models worldwide. More details below.

The 2016 Volvo XC90 is just now hitting the road, but there's already a problem. According to a letter obtained by Autoblog, Volvo is asking dealers to stop delivering any seven-passenger version of the XC90 because of problems with the Inflatable Curtain airbag system.

"Volvo has identified that the Inflatable Curtain (IC) may not inflate as intended for third-row passengers. In the event of a crash, the interior panel on the D-pillar(s) may obstruct the IC from inflating fully. If this would occur, the third row passengers may have less protection from the IC," writes Jason Guidi, Volvo's North American manager for warranty, product safety, and compliance, in a letter to all US and Canadian dealers.

The letter states that all seven-passenger XC90s currently in dealer inventory "must be quarantined and not available for customer delivery." As for crossovers that have already been sold, Volvo's statement says those vehicles "will be addressed when additional information is available."

UPDATE: Volvo says that this isn't an official stop-sale. "Dealers can still sell XC90s though we are having them hold customer deliveries until the fix can be implemented," a spokesperson told Autoblog. Volvo also clarified a few other points about this issue: 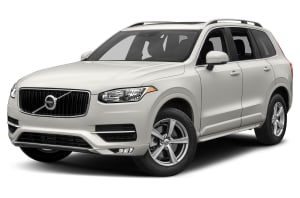