If you're enamored of the Lamborghini Huracán but have been waiting (and saving) for the convertible version, you may have to wait a little longer. According to Motor Trend, the drop-top Huracán won't make its debut before the 2016 Geneva Motor Show. That's almost eight months from now.

The basic parameters of what the Huracán Spyder (as it's likely to be called) aren't hard to forecast. It will in all likelihood carry the same 5.2-liter V10 as the coupe, with the same output of 602 horsepower and 413 pound-feet of torque driving all four wheels through a seven-speed dual-clutch transmission. Expect a slight performance penalty in return for the open-top experience as compared to the fixed-roof version, which is expected to boast a 0-62 time of 3.2 seconds and a 202-mile-per-hour top speed.

Other powertrain configurations may follow, but the roadster is likely to pack that same configuration at launch. While the larger, more powerful Aventador is about to breed its fourth model variant in the form of the Superveloce Roadster, the Huracán has only been made available thus far in one version. Our sources at Lamborghini tell us that will change soon, however, with numerous variants to follow – just like they did with the prolific Gallardo that came before. And the Spyder could be the first of the many to follow.

The bigger question is what kind of roof mechanism Lamborghini will go with for this latest open-top supercar. The Gallardo Spyder used a fabric roof mechanism (removable roof panels are featured on the Aventador Roadster), however the Huracán Spyder will have to contend with rivals like the McLaren 650S Spider and the new Ferrari 488 Spider – both of which incorporate folding hard tops. The latter was just released this week and is set to debut at the Frankfurt Auto Show this September, giving it a good half year before its rival from Bologna hits the scene. 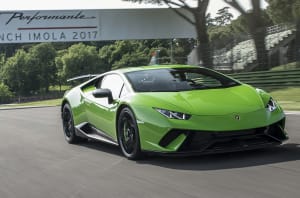