Clarkson's final Top Gear lap and what could have been

Bradley Iger
If you possess even a passing interest in the BBC's popular motoring show and have had access to the Internet within the last few months, you've no doubt heard about Jeremy Clarkson's " fracas" – a scuffle with one of the show's producers after a long day of filming. This was just one of the many incidents that brought scrutiny to the outspoken presenter over his 13 years as a host of the modern iteration of Top Gear. During their tenure, Clarkson, James May, and Richard Hammond took a virtually unknown show about automobiles and turned it into a global phenomenon – one of the most-watched television programs on the planet.

A few weeks after the BBC suspended the presenter and halted production of subsequent episodes of the show, Clarkson attended a charity auction in London where he revealed during the bidding for a lap with him around the Dunsfold Aerodrome circuit that "I'll drive somebody around in whatever I can get hold of. I'm sacked so it's probably an Austin Maestro. So who knows? But anyway it will be my last ever lap of the Top Gear track."

A tweet from Clarkson suggests that the final-lap car was either a Mercedes-AMG GT S or one of two Ferraris, a LaFerrari or a 488 GTB. Not quite an Austin Maestro. In terms of the affair serving as a final send-off for this era of the program, much like the cobbled-together final episode of Series 22 it did little to capture the spirit of the show we loved so dearly. It was not the closure we deserved.

So what would have been? How can a single lap encapsulate what made Top Gear resonate with gearheads around the world? Perhaps it's the car.

Now that isn't to say that the AMG and Ferraris are uninteresting cars – far from it. But, ignoring the fact that this particular event was for charity and instead pretending that any car was an option, I pose the notion that something along the lines of a Ford Escort XR3 might have been more appropriate. 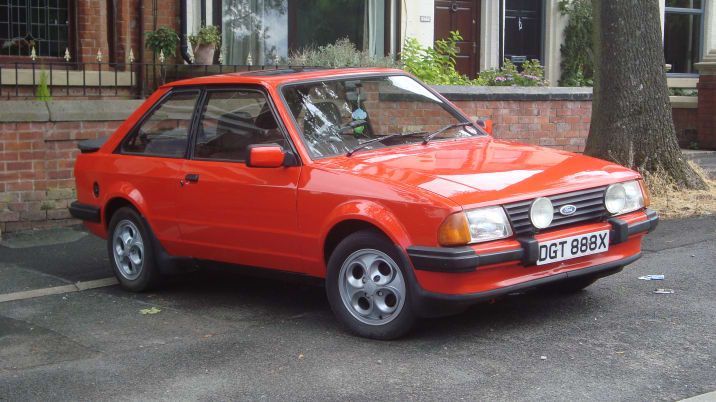 Clearly my proposition isn't centered around sheer performance, cutting-edge design, or the latest technologies. Instead, it's about recapturing what it was that made automobiles so compelling to begin with, and for the vast majority of young gearheads, their context for high-end sports cars and supercars rarely goes beyond gazing at posters and daydreaming.

But for enthusiasts coming of age in Clarkson's era, cars like the XR3 brought the feeling into reality; it was one of the accessible, interesting vehicles that made cruising, tuning, and acting like a complete jackass on four wheels possible for Brits of Jezza's age group.

Modern high-performance machines like the trio on hand for Clarkson's final lap certainly have the ability to shock and awe both aesthetically and out on the road course, but they don't really capture the true essence of Top Gear. Sure, there's been no shortage of weapons-grade hardware on the show over the years, but my fondest Top Gear memories typically center around things like miraculously reviving a drowned Toyota Hilux after it spent hours submerged in the ocean or watching proper football (what you call soccer) being played with a fleet of VW Foxes.

To capture that essence in a single pass around the test track may have been an impossible feat. But from a symbolic standpoint, a car like the XR3 could have served as an apt reminder that deep pocketbooks are not a requirement to have fun on four wheels, which to me has always been the true hallmark of the program.

The Clarkson era of Top Gear may have ended with more of a whimper than a roar, but that's life sometimes. Here's hoping that the fellas get a chance to set the record straight when they reappear with their rumored new motoring show in the not-so-distant future.