New Ford Escape spied inside and out For the 2016 model year, the Ford Escape receives the Blue Oval's latest Sync 3 infotainment system and some minor tweaks to the color and trim options. Based on these new spy shots, it would appear that the crossover is due for some much bigger changes not too far into the future, as well. The thorough refresh isn't just an exterior styling update, either.

Ford's designers are giving the future Escape a front end that's a bit more in the style of the latest Edge, at least based on these shots. Peek behind the mesh obscuring the grille, and the styling there now appears to have a hexagonal shape with horizontal slats and a smaller, lower intake. At the same time, the headlights are narrower and come to a sharper point as they wrap around the fender. The heavy camouflage makes the changes at the back harder to spot, although the taillights seem subtly tweaked with a similar overall shape but a clear stripe cutting through the center.

The Escape also seems to be receiving a completely different center stack inside, but the area is still well concealed. The gearshift moves down between the seats, and that allows physical controls for the radio and HVAC to take that real estate. It's possible that the infotainment screen might pop up from the mesh-covered area you can see at the top of the interior photos. Take a look through the gallery for some detailed shots of Ford's camouflaged crossover. 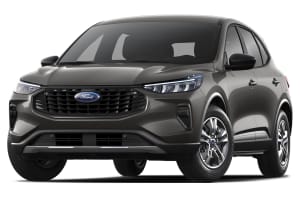 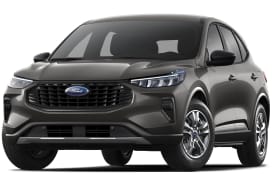 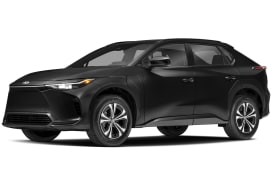