Hyundai Sonata PHEV may be a game (and mind) changer If you really, really want to consume volts instead of fuel on your way to work, school or shopping, you currently have just three options: pure EV, hydrogen fuel cell, or plug-in hybrid EV. Much as we love them, we all know the disadvantages of BEVs: high prices due to high battery cost (even though subsidized by their makers), limited range and long recharges.

Yes, I know: six-figure (giant-battery) Teslas can deliver a couple hundred miles and Supercharge to ~80 percent in 10 minutes. But few of us can afford one of those, Tesla's high-voltage chargers are hardly as plentiful as gas stations, and even 10 minutes is a meaningful chunk out of a busy day. Also, good luck finding a Tesla dealership to fix whatever goes wrong (other than downloadable software updates) when it inevitably does. There still aren't any.

Even more expensive, still rare as honest politicians, and much more challenging to refuel are FCEVs. You can lease one from Honda or Hyundai, and maybe soon Toyota, provided you live in Southern California and have ample disposable income. But you'd best limit your driving to within 100 miles or so of the small (but growing) number of hydrogen fueling stations in that state if you don't want to complete your trip on the back of a flatbed.

That leaves PHEVs as the only reasonably affordable, practical choice. Yes, you can operate a conventional parallel hybrid in EV mode...for a mile or so at creep-along speeds. But if your mission is getting to work, school or the mall (and maybe back) most days without burning any fuel – while basking in the security of having a range-extender in reserve when you need it – your choices are extended-range EVs. That means the Chevrolet Volt, Cadillac ELR or a BMW i3 with the optional range-extender engine, and plug-in parallel hybrids. 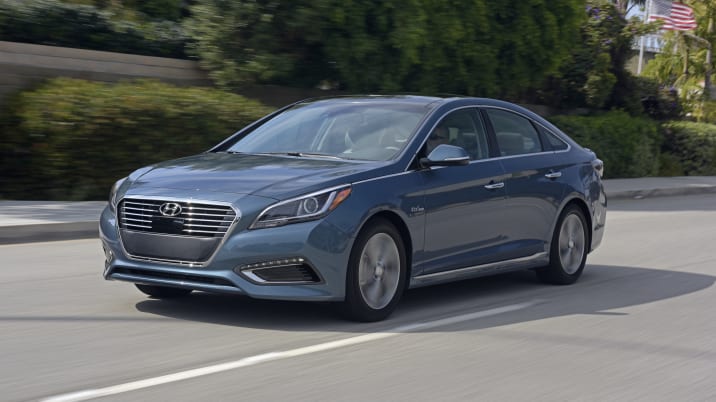 Regular readers know that, except for their high prices, I'm partial to EREVs. They are series hybrids whose small, fuel-efficient engines don't even start (except in certain rare, extreme conditions) until their batteries are spent. That means you can drive 30-40 (Volt, ELR) or 70-80 miles ( i3) without consuming a drop of fuel.

And until now, I've been fairly skeptical of plug-in versions of conventional parallel hybrids. Why? Because, in my (admittedly limited) real-world experience, most are good for only a handful of miles (maybe 10-15, depending on driving style, terrain and temperature) at fairly leisurely speeds before their engines intrude on your electric transportation party.

But I've recently spent time in two that offer much more (reasonable-driving) real-world, EV-only range: the 2016 Volvo XC90 T8 and the 2016 Hyundai Sonata PHEV. As I wrote earlier, I spent the XC90 press-launch drive in 302-hp supercharged/turbocharged 2.0L T6 versions because the (unfortunately named) T8 "Twin Engine" plug-in hybrid was available only for brief city spins at day's end. But it promised up to 25 miles of EV-only range and seemed capable of delivering close to that based on how slowly it seemed to be using its battery charge even during fairly aggressive city driving.

On the other hand, my co-driver and I got good a half-day's test of a 2016 Sonata "Blue Drive" Plug-In Hybrid, starting with a full battery, and logged 28 miles of no-gas cruising in moderate urban/suburban traffic near San Diego, driving gently at 30-50-plus mph, before the battery handed over to the car's 154-hp 2.0L direct-injected gas engine. Then we shifted to its surprisingly effective battery-charge mode and boosted its indicated EV range back to 13 miles in just 24 miles of freeway driving at 70-80 mph. Impressive!

How did we achieve that 28 EV miles (four better than the class-leading 24 miles Hyundai claims)? For one thing, the Sonata's redesigned 2016 hybrid system is more efficient throughout than the previous generation's. For another, the car's claimed 0.24 drag coefficient (Cd) is best in class – equal to the Tesla Model S's, better than the Toyota Prius's (0.25) and all other current hybrid sedans. And it prioritizes regenerative over hydraulic braking.

But the main reason was its big 9.8-kWh lithium-ion battery pack. (Hyundai likes to call it "lithium polymer," but it's li-ion in a polymer case, like the Volt's and others from LG Chem.) That's more than 60 percent of the Volt's 16 kWh and 40 percent of the Nissan Leaf's 24 kWh – yet its behind-the-rear-seat-plus tire-well location leaves nearly 10 cubic feet of trunk. With its (early internally estimated) fuel economy of 40 miles per gallon once the battery is spent and a 14.5-gallon tank, its claimed total EV+gasoline range is a bladder-busting 600-plus miles.

Looking at the Sonata plug-in's only two mid-size-sedan competitors, Honda's Accord plug-in and Ford's Fusion Energi, the former's pack carries 6.7 kWh for a 13-mile claimed EV range, the latter's 7.6 kWh for a (questionable) 21 miles. Their claimed total ranges are 570 and 550 miles, respectively, and their trunk capacities are 8.6 and 8.2 cu. ft.

The downsides of all that battery are weight and cost. The XC90 T8 three-row luxury XUV (with a 9.2-kWh pack) weighs 5,000 pounds and starts at $70,000. The Sonata PHEV weighs 3,500 pounds and starts at ... we don't know yet. But if li-ion batteries are still in the $400/kWh range, its battery cost (to Hyundai) must be close to $4,000, so I'll guess its starting sticker at around $40,000, depending on how much Hyundai will subsidize it to meet federally mandated sales numbers.

It's also a very nice-driving family sedan. But unfortunately for those who might like to have one, it will be initially offered only in California and Oregon starting this fall, and eventually in the other eight misguided ZEV-mandate states (Connecticut, Maine, Maryland, Massachusetts, New Jersey, New York, Rhode Island and Vermont.) In the other 40 states, Hyundai says, you may eventually be able to custom-order one.

Price and availability aside, these two PHEVs – especially this very agreeable and fairly affordable Sonata plug-in – have me rethinking the viability and desirability of the whole idea.