Ever the proponent of diesel propulsion, Audi has claimed two very different kinds of records in Europe with its finest oil-burners.

The more exciting of the two was achieved recently at the Sachsenring, where the Audi RS5 TDI Competition Concept posted the fastest diesel-powered lap time ever recorded on the track. As you may recall, Audi revealed the RS5 TDI Concept last year, swapping the gasoline-burning 4.2-liter V8 in the production RS5 coupe for a 3.0-liter V6 diesel with two turbochargers and an electric supercharger. 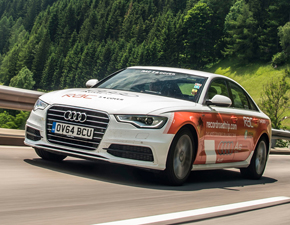 The result was 385 horsepower and 553 pound-feet of torque, but Audi's been working on the prototype over the course of the past year. In the new Competition version, output is up to 435 hp and 590 lb-ft, and despite the inherently heavier diesel engine, it actually weighs 531 pounds less than the production model. That helped the RS5 TDI Competition lap the circuit in 1:35.35, besting the previous diesel lap record by 1.87 seconds, and adding to the Hockenheim record it took previously.

Around the same time, another team set out from Maastricht in the Netherlands in an Audi A6 TDI Ultra and drove it for 28 hours straight, hitting 14 countries and logging 1,158.9 miles on a single tank of diesel. The achievement, certified by Guinness World Records, was completed in a showroom-stock vehicle, with automotive journalist Andrew Frankel and racing driver Rebecca Jackson splitting driving duties. They achieved an average of 75.9 miles per gallon – much better than the advertised rating of 67 mpg – as they cruised through from Holland to Hungary, passing along the way through Belgium, Luxembourg, France, Switzerland, Lichtenstein, Austria, Germany, Italy, Slovenia, Croatia, Bosnia, and Serbia.

Audi has set a new record time on the Sachsenring for cars with a diesel engine. The Audi RS 5 TDI competition concept rounded the 3.6 km (2.2 mi) race course in a time of 1 minute 35.35 seconds. The technology platform draws its power from a 3.0-liter V6 biturbo TDI with 320 kW (435 hp) of power and 800 Nm (590.0 lb-ft) of torque. The highlight is an electrically driven compressor.

The record time was set by race car driver Nicki Thiim as part of Sachsenring Record Day, which was organized by "Auto Bild Sportscars" magazine and the tire manufacturer Michelin. The Audi RS 5 TDI competition concept beat the record time for diesel cars by 1.87 seconds with a time of 1 minute 35.35 seconds; the old record was set in February 2015. In spring 2015, "sport auto" magazine tested the Audi technology platform on the Hockenheimring, and it posted the best lap time in the magazine's history for a car with a diesel engine.

"I am proud of the excellent performance on the race tracks, because it underscores the leadership claim of Audi in the development of highly efficient and sporty diesel engines," says Ulrich Weiß, Head of TDI Engines Development at AUDI AG. "We really pulled out all of the stops in developing the Audi RS 5 TDI competition concept – in its lightweight design, chassis and of course its drive system. We exploit the full power potential of the TDI and supplement it with the added thrust of the electric compressor, which we will soon see in a production car model."

A core innovation with this biturbo V6 TDI is that – in addition to its two exhaust-gas driven turbochargers – it also utilizes an electrically driven compressor. This compressor ensures faster buildup of charge pressure at low engine speeds and improves engine response as well as sprint performance significantly. It utilizes a small electric motor with seven kW of power that drives a turbine to a speed of up to 72,000 revolutions per minute within 250 milliseconds; this means that it builds up its charge pressure independent of the energy available in the exhaust gases. Illustrating just how quickly this technology reacts is the fact that a typical exhaust-gas driven turbocharger takes two to three times as long to reach a comparable turbine wheel speed. Thanks to its electrically driven compressor technology, high charge pressure is available quickly in the RS 5 TDI competition concept in any driving situation – a trait that is essential for excellent sporty engine response.

The Audi RS 5 TDI competition concept is 241 kg (531.3 lb) lighter than the model upon which it is based. Various lightweight design measures have reduced the car's weight: The engine hood consists of carbon fiber reinforced polymer (CFRP), the doors are made of aluminum, and the exhaust system is largely made of titanium. Inside, it features CFRP race bucket seats, and the rear bench seat is eliminated as part of an interior concept that is based on lightweight design. Thin glass and polymer windows are used as well.

The Audi TT clubsport turbo show car, which has generated much excitement, also utilizes the electrically driven compressor for its 2.5-liter five-cylinder TFSI. Information on this is available here.

- 14 countries and 1158.9 miles covered on one tank of diesel
- Audi A6 TDI ultra averaged 75.9mpg overall
- The #RecordRoadTrip began in Maastricht at 9.48am (GMT) on Tuesday 9 June and ended in Hungary at 12.44pm (GMT) on Wednesday 10 June
- 28 hours of driving completed almost non-stop by Andrew Frankel and Rebecca Jackson
- World record galvanises the Audi ultra philosophy of pioneering efficiency

Audi and the RAC have officially set a new GUINNESS WORLD RECORDS title by driving to 14 countries on a single tank of fuel. The unmodified Audi A6 TDI ultra chosen for the challenge comfortably exceeded its official 67mpg-plus potential by averaging a remarkable 75.9mpg and completing a total of 1158.9 miles without the need for a fuel-stop.

Commenting on the new record, Jon Zammett, Head of Audi UK Public Relations, said: "By covering so much of Europe on a single fill-up, we have proven that real-world economy of almost 76 mpg or more can be had from the latest engine technology. The Audi A6 TDI ultra has proven the range capability of one of the world's most advanced executive cars."

Both drivers faced numerous challenges in their 28-hour driving adventure including diversions for both heavy traffic due to an accident and a closed tunnel which led to an unplanned mountain detour.

Andrew Frankel, respected newspaper car reviewer, said: "I'm delighted to be part of the team that has set this record and would like to think it will stand for some time as we eked out every last mile from the A6's tank. From an endurance point of view the challenge actually proved to be far harder than both Rebecca and I imagined it would be.

"Despite sharing the driving we were on the road almost continuously for 28 hours, focused on maintaining an average speed of around 50mph. In order to do this you have to be fully aware of what's going on around you and anticipate what could happen with the traffic ahead. While it was normal driving in one sense, it was also a very different type of driving, but nevertheless demanding."

Racing driver Rebecca Jackson added: "I feel Andrew and I have helped the RAC and Audi set a record to be proud of. I'm known for driving pretty fast, but this challenge was naturally more about maintaining a constant, fuel-efficient speed and not being caught out by vehicles which would cause us to slow down and then accelerate to the optimum speed again. This was an amazing event and a very different long-distance driving challenge to what I'm doing next year when I compete in the 24 Hours of Le Mans 2016."

As the efficiency champion of the A6 range, the Audi A6 TDI ultra represents the pinnacle of the Vorsprung durch Technik brand's absolute focus on maximisation of efficiency for extraordinary fuel economy and emissions, underpinned by a refusal to compromise on the hallmarks that define an Audi. The 'ultra' badge is also reserved for the most frugal A3, A4, A5, A7 Sportback and TT models, all of which are available to order now.

This new world record also proves just how capable the A6 ultra is of covering huge distances closer to home – in Britain, the same car could theoretically swallow whole the well known A3, A4, A5, A6, A7 and A8 arterial roads, again without a single fuel stop. If laid end-to-end, these key trunk roads, which sprawl southwards and westwards from the centre of London towards Southampton and Bristol, and radiate as far north as Glasgow, would stretch for 933 miles. The staggering potential range from its 73-litre fuel tank also puts any one of the 12 margins of Europe within easy reach: