Michael Austin
The question going into this year's 24 Hours of Le Mans was whether or not the Porsche 919 Hybrid would be able to combine its qualifying pace with race reliability. After battling neck-and-neck with Audi's R18 for most of the race, the answer is a resounding yes. Not only did Porsche drivers climb the first two spots on the podium, they did so without any major mishaps on track. This win is the first overall trophy for Porsche since 1998. Audi previously won the last five races, and 13 of the last 15.

Corvette also returned to the winner's circle, with the No. 64 C7.R taking winning the GTE Pro division. The victory is the first class win for Corvette since 2011. KCMG won the LMP2 class in ninth overall. With 45 minutes to go the No. 98 Aston Martin crashed out of first place in GTE Amateur, giving the class win to SMP Racing's Ferrari and second place to the Patrick Dempsey Racing Porsche 911 RSR. 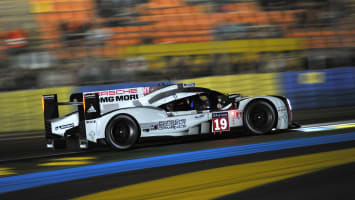 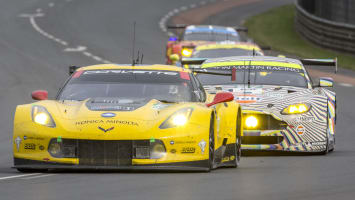 The GTE Pro class proved to be just as exciting as the P1 class, with a four-way battle for first after four hours into the race.

For most of the race, the battle at the top went back and forth between the two German manufacturers. An tire puncture in the No. 7 Audi gave up the lead to Porsche, and moments later a crash forced the No. 8 into the garage. But a three-minute replacement of the front and rear bodywork kept the Audi in contention.

As the race wore into the night, Porsche maintained a slightly faster pace than Audi. Nick Tandy took the lead on Lap 253 early Sunday morning, and car No. 19 never gave up the top position. The win is the first for all three drivers of the No. 19 – Nico Hülkenberg, Earl Bamber, and Nick Tandy. A lap behind in second was the No. 17 Porsche. The Audis fought reliability problems late in the race but still finished third with the No. 7 R18.

The GTE Pro class proved to be just as exciting as the P1 class, with a four-way battle for first after four hours into the race. As the Aston Martin cars dropped away, the lone Corvette Racing entry took over, followed by a charging AF Corse team Ferrari 458 Italia. The Corvette and Ferrari continued to trade places in the final hours until gearbox trouble forced the No. 51 Ferrari out of contention. It was eventually passed by the other AF Corse car, No. 71.

Nissan experienced all the pain of a first-year effort with its front-wheel-drive GT-R LM Nismo. The three car effort was consistently 20 seconds slower than the leaders, and cascading problems kept the cars in and out of the garage. The 21 car retired late into the night after losing a rear tire, while the 23 stopped running with just an hour to go. All three Nissans ran with no or minimal hybrid assist, which caused a lack of acceleration and put more stress on the front brakes. Said team chief Darren Cox, "It's frustrating for all of us but it's the right thing to do, to turn as many laps as we can. It's a massive learning curve."