As of Saturday afternoon in Montreal, Canada, it was all about the number four. Lewis Hamilton put his Mercedes-AMG Petronas on pole position for the fourth time at the Circuit Gilles Villeneuve, and now his tally of pole positions matches his race number: 44.

Nico Rosberg lines up beside him, which is the fourth time that particular one-two combo has occurred this season. Ferrari spent three engine development tokens to try and close the gap to Mercedes, Kimi Raikkonen making the most of it with third position on the gird. His teammate Sebastian Vettel got the worst of it, however, when the MGU-K unit failed during Q1, leaving him 160 horsepower down and out at the first hurdle.

Valtteri Bottas put a revitalized Williams on the grid at fourth, ahead of a Lotus lockout of the third row with Romain Grosjean leading the way in fifth, Pastor Maldonado just beside. Nico Hulkenberg got the first Sahara Force India into seventh – the team is still waiting on the upgraded B car that should be available for Austria – ahead of Daniil Kvyat in the first Infiniti Red Bull Racing and a "pissed off" Daniel Ricciardo in the second Red Bull. Sergio Perez made it two Force Indias in the top ten, a welcome result from a team performing below expectations of late. 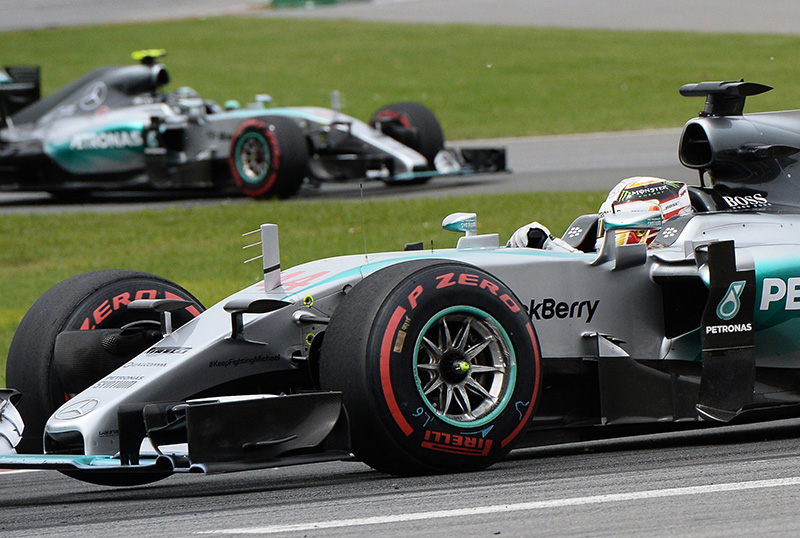 When the lights went out, at the very front it was much ado about not that much at all. Hamilton got away clean and stabbed across the track to close the door for Rosberg, giving Raikkonen a chance to take the inside line into Turn 1 in an attempt to clear Rosberg for second place. That didn't happen, leaving the two Mercedes' to run in grid position for the entire race. It wasn't boring – Rosberg stayed close, rubber-banding the time gap to the leader from a little more than one second to just under four seconds, and Montreal is famous for race-rearranging safety cars and on-track incidents.

But none of those occurred, so Hamilton crossed the line 2.285 seconds ahead of Rosberg after 70 laps to earn his fourth victory in Canada and the first-ever victory for the Brackley, UK-based Mercedes team. 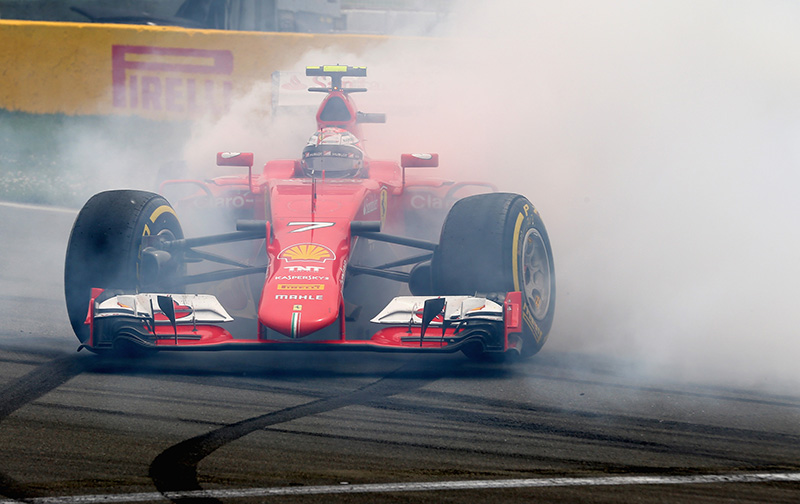 Valtteri Bottas drove his Williams to third position, the first podium place for the team this year and a welcome salve to heal the team's wounds from a poor showing in Monaco. That placing came courtesy of being in the right place at the right time, which was not far behind Raikkonen when the Ferrari driver spun at the hairpin on Lap 28 after his first pit stop. It looked like a repeat of last year, and Kimi again put the issue down to an engine setting that affects throttle mapping. We're not sure who did what or who should have done what, but the result of that move moved Raikkonen into fourth at the finish when he couldn't catch the Williams ahead, even after pitting for a new set of super-softs to help the chase.

Behind him came Sebastian Vettel, cursed throughout the weekend but touched by luck and a few cars on the way to a fifth-place finish. The German lined up on the grid in 18th after taking a few penalties, then coursed through the field in a Ferrari that is clearly faster than it was a couple of weeks ago. He did have his moments, like when he tried to make a hasty pass on Fernando Alonso in a clearly inferior McLaren at the final chicane and had to use the runoff, and another wacky chicane moment with Nico Hulkenberg that saw both cars diverging to the runoffs on either side of the track, but he showed what the new Ferrari engine can do with the drive of the day. 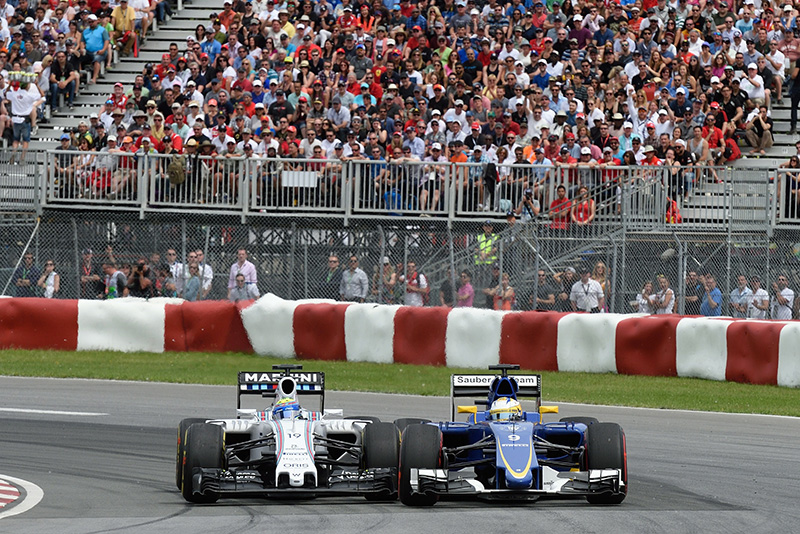 Felipe Massa crossed the line in sixth after his own drive through the ranks, the Brazilian having started in 17th, just ahead of Vettel, due to engine turbo woes in qualifying. He drove a clean race, had a brilliant bit of side-by-side cornering with Sauber's Marcus Ericsson in the opening stint, and did his part to show that Williams can still make some noise in the Constructor's Championship fight.

Pastor Maldonado, who we don't normally get to talk about at this end of the race, finished in seventh and delivered some much-needed and much-deserved points to Lotus. In spite of all the cars swapping places in the thick part of the top ten, the Venezuelan kept it fast and fair, his biggest incident coming when Vettel passed him at the chicane and he took the escape road. We'd like to see more of this guy. 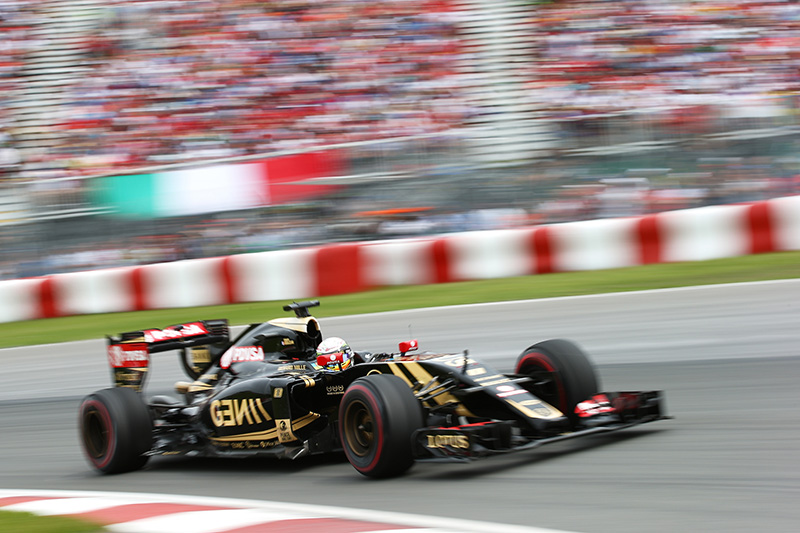 Hulkenberg flattered his Force India with an eighth-place finish, ahead of Daniil Kvyat in the Red Bull in ninth. Romain Grosjean brought the second Lotus home in tenth, a lucky result considering he had a moment that reminded us of 2012 Grosjean: he misjudged his pass on a Manor just before the final chicane and pulled over – into the slowest car in the race – earning an immediate puncture as he shredded the Manor's front wing. Then he made it worse by protesting that Manor driver Roberto Mehri "hit me!" The stewards saw it differently, giving him a five-second time penalty at the end of the race and two points on his superlicense.

Hamilton's win puts him 17 points clear of his teammate, with 151 points compared to Rosberg's 134. Vettel is the only other driver in triple digits with 108 points. Mercedes walked off with another maximum haul in the Constructor's race and is now at 285 points, followed by Ferrari with 180 and Williams with 104. 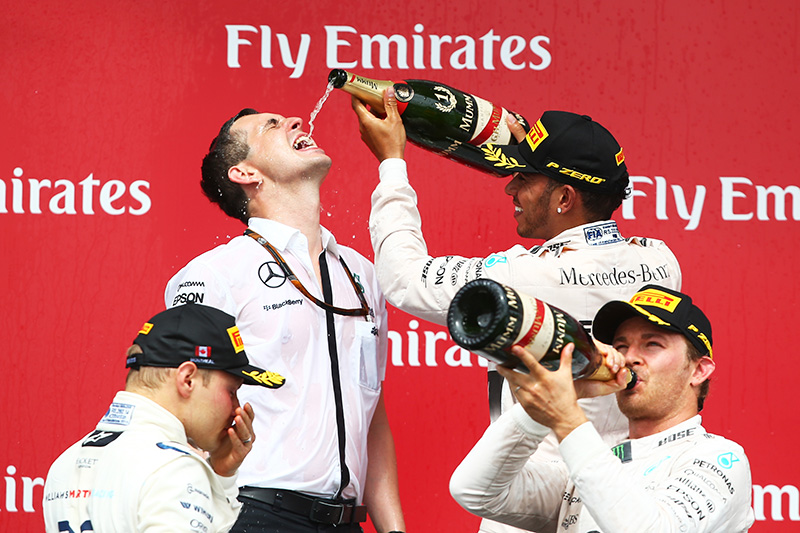 The next race is in two weeks in Austria, where we're told a number of teams that aren't Mercedes-AMG Petronas will be bringing big upgrades. Even if they don't do much to blunt the front of the order, we hope they keep things feisty in the pack. We'll see you then.