After The Last Supper, Leonardo Da Vinci painted the Mona Lisa, after recording their first album, Iggy and the Stooges released the brilliant Fun House. Not every second creative attempt has to bomb like The Strokes' second, Room On Fire, and not every new car model has to be heavier and uglier like the Mustang II.

Or at least that was the hope as I arrived in Italy for the launch of the 2016 Ferrari 488 GTB (Gran Turismo Berlinetta, if you're wondering). The new car traces its lineage back through 40 years of mid-engined V8 supercars, one that started with the 1975 308 GTB that replaced the V6 Dino series. But the 488 is also the follow-up to the 458 Italia, which is generally considered to be the zenith of all things Ferrari. With sublime handling and a yowling V8 that made you question how fast you could really travel on public roads, the Italia was an Italian missile wrapped in voluptuous aluminum.

When the 488 GTB debuted at the Geneva Motor Show in March, the portents weren't good. As well as having fewer curves and a turbo engine, trouble was brewing inside the stronghold. Last fall, Fiat Chrysler Automobiles ( FCA) chairmain Sergio Marchionne sacked Ferrari president Luca de Montezemolo. And Marchionne's plan to sell 10 percent of Ferrari on the stock market raises fears of hedge fund guys calling the shots at this archetypal Italian sports car maker. What's more, there's already talk of increasing annual production from the current cap of 7,000 units to 10,000. 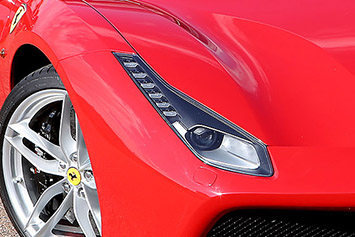 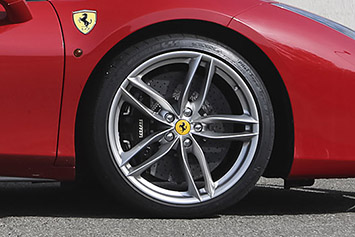 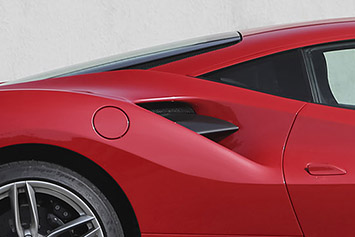 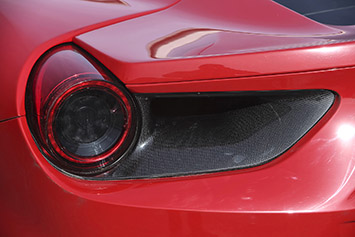 But back to the 488 GTB. The new car is based on the same aluminum underbody as the 458, but with less dramatic looks. The source of those looks is not the design department, however. "We gave them [the design department] the shape...they started with that shape." explained Matteo Biancalana, Ferrari's aerodynamics chief.

So wind tunnel data penned the GTB's lines, mainly because of an ambitious target to achieve 50 percent more downforce than the outgoing model with no increase in aerodynamic drag. "We had to touch every millimetre of the car apart from the carried-over roof," says Biancalana. The front grille channels air through the radiators, cools the brakes and denies air access to the underbody, which consequently develops low pressure areas that suck the car to the road. There's a moveable spoiler under the body at the rear to reduce drag at high speed in a straight line. A "blown" rear spoiler channels air underneath the wing and pushes turbulent vortices away from the body to reduce drag. The horrible look of the door handles is because they're shaped to funnel air into the engine intake ducts.

Then there's the engine. It's basically the same all-aluminum, 3.9-liter, flat-plane crank V8 as in the new California T. New parts include the bottom end, slipper pistons, revised cylinder heads, and camshafts, but the valves carry over. On a display stand the power plant is enormously wide, mainly because of the long inlet tracts and twin IHI turbos sticking out the sides. The blowers are made of a titanium-aluminum alloy with a ball-bearing-supported turbine shaft and compressor seals that can touch the housing without damage (abradable, if you want a new word), all of which helps improve volumetric efficiency, reduce inertia and speed throttle response. 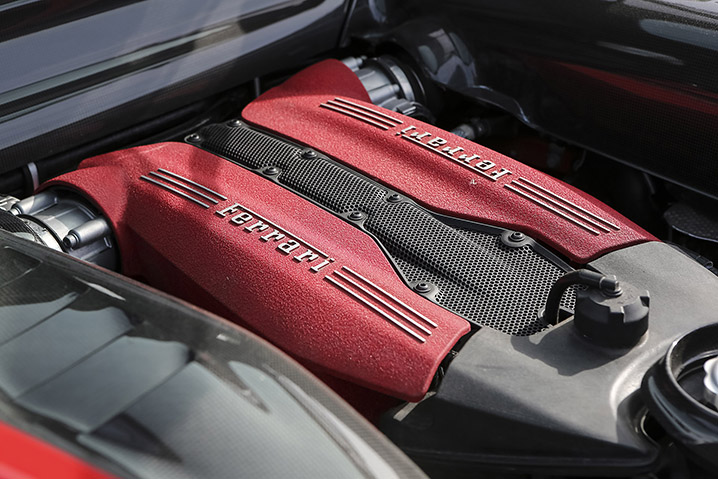 Like the rest of the 488, the running gear is more revised that reimagined. The transmission is the same seven-speed, dual-clutch gearbox as in the 458. The rear differential is Ferrari's electronically controlled limited-slip unit, which varies the amount of torque supplied to each wheel according to steering and slip angles. There's also a retuned version of Ferrari's side-slip angle control which stiffens and slackens off the magnetorheological shocks (also known as MagnaRide) to improve grip. Those two bits of hardware plug into the F1-Trac stability and traction-control system to maintain driver control even with the wheels spinning and the car sliding. As with all modern Ferraris, the settings can be progressively dialed out with the manettino steering wheel switch, although the 'everything-off' mode still leaves side-slip control, the electronic diff, and ABS switched on.

Climb in across the wide sills and you are faced with the expansive dash, open footwell, and low center console typical of mid-engined sports cars. There's a huge tachometer flanked by ancillary displays for everything from oil and water temperatures to lap times. The infotainment display is tiny and the system is pretty hopeless. There are no steering-column stalks, just fixed gear-change paddles behind the wheel. Like in the 458, controls for turn signals are on the steering wheel. 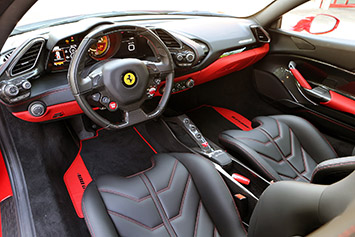 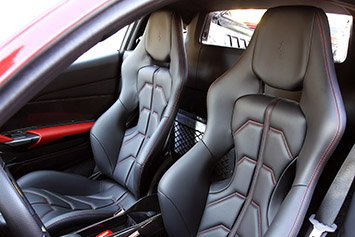 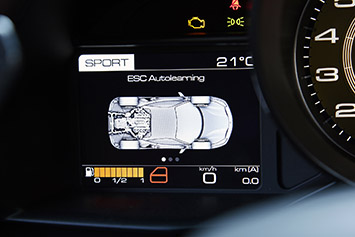 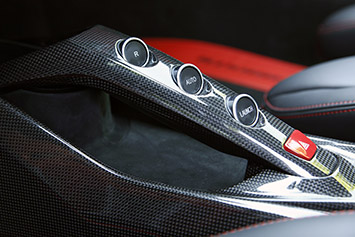 Passengers also get their own display of speed and auxiliary instrument readings. The heavily bolstered seats look the part and are supportive, but aren't particularly comfortable, especially after an hour on the road. Visibility to the front is fine, but rear views are restricted. The side mirrors do a great job to offer images of the engine's air intakes, but show little of the road behind. At least the luggage space is more than you might imagine, with room for a couple of soft bags behind the seats and 8 cubic feet of space in the forward trunk.

Press the big red start button to fire things up and the turbo engine drones through the aluminum body. It's quiet, almost inaudible at low revs, but at medium speeds it has a muffled, flat note that is far from the strident clarity of the old turbo-free V8 in the 458. By restricting the revs and managing boost pressure, Ferrari manipulated the engine's behavior in the lower gears to feel like the torque delivery of a naturally aspirated engine. On the track, where the throttle is generally wide open or shut, this works, but the part-load conditions on the road have a slightly artificial feel.

Of no doubt, however, is the sheer power of the forced-induction V8. If you floor the throttle at whatever speed, you'll be leaving your stomach in Maranello. It's so powerful that the traction control light is on most during on the road. Driving the 488 is an exercise in self-control. On the Ferrari's Fiorano test track it felt even more insane. The engine's Stentorian blare is certainly loud, but the electronics are silently managing the power. The gearbox normally makes fast but gentle changes, except in race mode where they're fast and abrupt. The first three ratios are closely stacked, which makes for shocking acceleration out of hairpin corners. 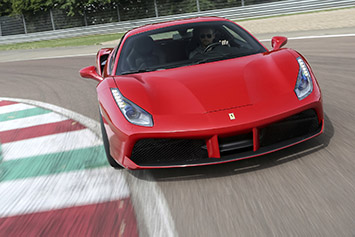 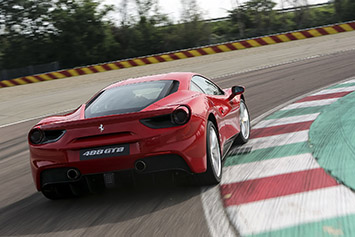 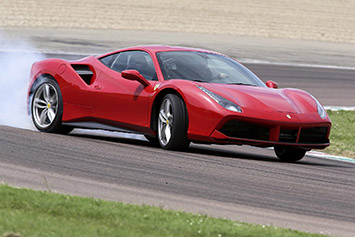 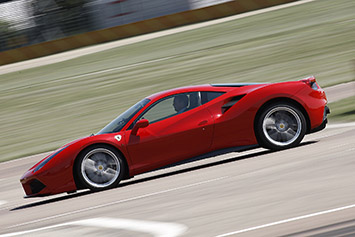 After the disappointment of the looks and sound, the chassis is a brilliant improvement over the 458. Against the modern tide the 488 retains hydraulic steering assist. Turning the wheel requires more effort than before, but has a sublime accuracy and turn in, plus a steady flow of feedback to the wheel rim. That's nice, because despite the self-evident grip of 20-inch Michelin Sport Pilot tires and the reassuring hand of several assistance systems, 660 hp ensures that if you provoke this beastie there's plenty of steering correction to be done. That said, handling breaks away gentle and progressive, which is an enormous achievement of calibration when you consider that the 488 is altering its aerodynamics, damping effort, traction, brake balance, and engine torque all in real time to keep you on the road. After a couple of laps, however, your eyes are like saucers from the sheer concentration required. This is an awful lot of car, with an awful lot of performance. Shame, then, that the standard carbon-ceramic brakes, while up to the job of stopping the car, aren't particularly sensitive, feel grabby on the road and rather spongy on the track.

The 488 GTB has a great chassis, though, and the performance is mean and magnificent. Even the looks are objectively great, but hanging over the 488 like Banquo's ghost is the outgoing 458, with its looks and clarion-sounding engine. If we hadn't tasted and heard the old car's brilliance, we would give its replacement all the stars it probably deserves. But we have, and in that respect the 488 is lacking in some important matters for most Ferrari owners. In exchange for speed, the 488 GTB relinquishes some of the emotional feel that makes our heart race.