Hyundai Sonata is the first application of Android Auto Hyundai is grabbing an early technological lead as the first automaker to launch Android Auto in one of its production models. The Google-made operating system is now available on the 2015 Sonata with navigation, and current owners of the vehicle can get the software through an update available at dealers. The OS arrives on additional Hyundai products soon.

Similar to Apple's CarPlay, Android Auto syncs with a smartphone to mirror some elements of the operating system directly on the vehicle's infotainment screen. The software allows for navigation through Google Maps, text messaging, and phone calls. Plus, it supports some third-party apps, as well. A driver can then control all of these functions through the car's microphone and physical controls. In a nod to safety, Android Auto also locks the phone's screen when in use to keep people from looking at their device while on the road.

Beyond the Android Auto software in the Sonata, users need Android 5.0 or later and a companion app on their phone. Several other automakers intend to support the standard in the future. Autoblog recently got the opportunity to try out the OS, and you can look forward to a full report about it.
Show full PR text
All-New Integration Available on Best-Selling Sonata

First car company to launch Android Auto on production vehicles, starting with the 2015 Sonata with Navigation

Fountain Valley, Calif., May 26, 2015 – Today, Hyundai becomes the first car company to launch Android Auto™ on production vehicles. Android Auto is premiering on the 2015 Sonata with Navigation at dealerships nationwide, and will later become available on other Hyundai models.

"Android Auto aligns with Hyundai's core interior design principles of safety, intuitiveness and simplicity," said Dave Zuchowski, president and CEO, Hyundai Motor America. "We launched this highly anticipated feature on our best-selling Sonata, adding to our promise of value. With the launch of Android Auto, we provide more owners with the experience of cutting-edge technology."

Android Auto not only brings a high technology experience to Hyundai owners, but also improves safety. For example, at any given daylight moment across America, approximately 660,000 drivers are using cell phones or manipulating electronic devices while driving, a number that has held steady since 2010.1 Android Auto helps keep drivers' eyes and attention on the road by integrating the advanced driving-related functions of the user's smartphone with the familiar centralized screen, physical controls and microphone of their car. Furthermore, the smartphone's screen becomes "locked," so drivers are not tempted to look down and interact with their phones directly while Android Auto is in use.

Owners will need the Android 5.0 "Lollipop" operating system or later, and the Android Auto companion app on their compatible phone to integrate Android Auto into Sonata's screen and controls. A micro USB cable is required to connect the phone to the car's USB port. The first time an owner plugs his or her phone into their parked Sonata, the phone will prompt the download of the Android Auto companion app from the Google Play. Users of Android Auto will instantly recognize familiar Android phone applications, such as Google Maps, Google Now, messaging, phone calling and Google Play Music upon connecting their Android phone to their Hyundai vehicle. These applications can be controlled by voice, steering wheel controls and touchscreen. Android Auto also will offer many popular third-party audio apps that owners have on their phones, including iHeartRadio, Spotify, TuneIn, NPR, Stitcher, Skype, TextMe and many more. Owners can find out up-to-date information about phone compatibility at https://support.google.com/androidauto.

The Google Now card-based experience provides suggested locations and travel times based on the user's searches, calendar entries and home and office locations, as well as weather information and "now playing" information for music streamed via the phone

App software (navigation, streaming music, etc.) is automatically updated because the apps live on the phone

Owners can easily bring their personal reminders, suggested destinations, calendar appointments and music preferences with them when they get in their car 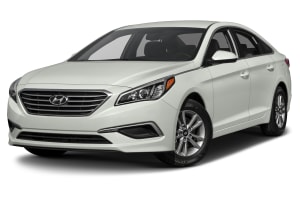