Sebastian Blanco
View All Specs
Daily Driver videos are micro-reviews of vehicles in the Autoblog press fleet, featuring impressions from the staffers that drive them every day. Today's Daily Driver features the 2015 Toyota Yaris SE Hatchback, reviewed by Sebastian Blanco.

[00:00:00] Hello, everyone. Sebastian Blanco here from Autoblog and AutoblogGreen , with the Daily Driver, this time in the 2015 Toyota Yaris SE Hatchback. It's in a fine blue color called Blue Streak Metallic. This car comes in at just under $17,000, but with all the options and we'll talk about that in a minute, it comes to $18,700. It's rated at 30 miles per gallon in the city,

[00:00:30] 37 on the highway, and 33 combined. I've driven it a little over 350 miles this week and the dashboard is reading at 36.8 miles per gallon average, so it definitely gets props for hitting the EPA fuel economy numbers. It has warmed up a little, so we're not operating in the cool Michigan winter that some of my previous cars were, so I gave them a little slack for being under the average. This one right on the money her in the spring time. I do like the

[00:01:00] roominess of it. I think it feels great for such a small car. Visibility, you can see everywhere you look. All cars should have this but so few of them do. I like that it's a manual transmission. It's been way too long since I've driven a manual. I do like even this little pocket thing up front here. I haven't put anything in it. I just like that it's there. I don't know, maybe you can put your phone in there or something, but it's cool. The worst part about this though is the infotainment screen here. It is unresponsive. It looks like it's something from Windows 95.

[00:01:30] It just acts so weird when it connects to my phone. It connects either via Bluetooth or USB. It's for me, maybe I just haven't had enough time with it, but it's very hit and miss as far as getting my music or my podcast to stream over the vehicle's audio system. The nav system is a $900 upgrade, and given how bad it looks and how bright it is at nighttime, I think an after-market system or even just a mount for your phone is a much, much better deal. Like

[00:02:00] I said, this is the base model. There's absolutely nothing wrong with that. I'm a big fan of utility, practical, don't get anything extra. Just get what you need, but this one, there's not a lot that I can recommend here in the Yaris on top of a competitor, like say, the Fit. It's a small frugal vehicle and if that's what you're looking for, check this one out, or again, get a Honda Fit. For Autoblog and AutoblogGreen , Sebastian Blanco. 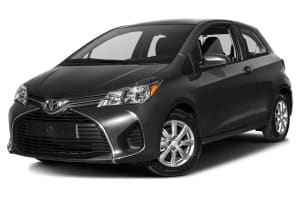