The British Are Coming, And This Time It's Real

You've seen this movie before. Topple the BMW 3 Series has gone more rounds than The Fast and The Furious and The Transporter combined. But like any good cinematic retread, this time it's different.

For starters, the latest installment is a zombie flick. Born from the ashes of Ford ownership and the failed X-Type, the 2017 Jaguar XE is coming to save us from the somnambulant, undead Bimmer. Think Army of Darkness with luxury sport sedans, and you'll understand what we're going for.

Okay, the plot is only based on a true story. The reality in the automotive world isn't as dramatic as most car journalists would like you to believe. But the XE is hugely important for Jaguar's desire to increase global production. You're looking at the future best-selling model. It's built on an all-new body structure that forms the basis for all the brand's upcoming sedans. The smallest, most affordable Jaguar also launches with a new engine family, built in a new factory in England. 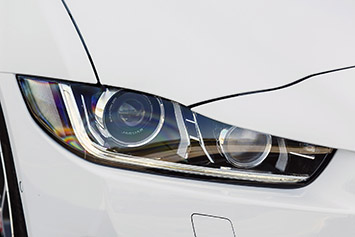 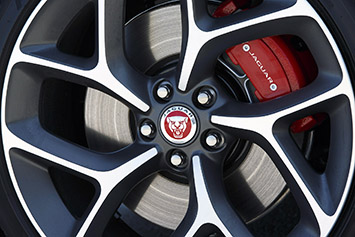 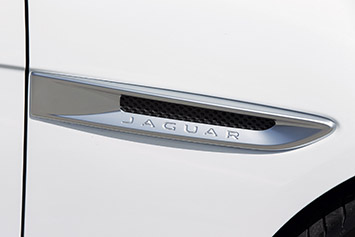 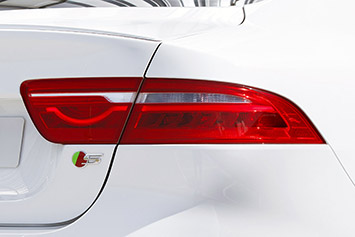 The XE arrives stateside in early 2016 with two available engines. A 2.0-liter diesel from the new Ingenium lineup is the entry-level model. Above that is the supercharged 3.0-liter V6 familiar to the Jaguar and Land Rover lineup. A turbo 2.0-liter gas engine will come in below the diesel at a later date, with an optional manual transmission. The XE versions on launch will offer rear- or all-wheel-drive. Pricing information is yet to be revealed. Until then, just assume the XE will mimic its competitors for price and content. We spent most of our time driving the 35t with R-Sport trim, but check back for a driving impression of the diesel in a few days.

As we reported in our prototype drive of the XE earlier this year, this car has incredible steering feel. It's the supernatural aid in the XE's monomyth if any film buffs are still paying attention. The electrically assisted system ranks in the hall of fame with the rack on the current Porsche 911 Carrera. Lightly weighted, the loads build up in the steering wheel like it's wired to strain gauges on the sidewall of the front tires. 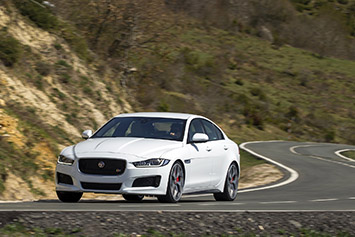 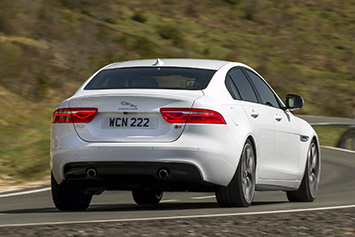 It's not just good programming that makes the XE steer so well, although that's a big part. The rest comes from the chassis. Jaguar engineers claim the double wishbone front suspension uses lessons learned from the F-Type. The rear part of the car's quick responses comes from a multi-link setup Jag calls integrated link. A body 20-percent stiffer than the current XF also contributes to sharp reflexes. Three-quarters of the structure is made of aluminum, and the dashboard crossbeam uses magnesium. Still, we expect a loaded 35t to tip the scales close to 3800 pounds, close to the BMW 335i's weight.

If the XE isn't the featherweight of its class, though, you'd never know from behind the wheel. Outputs of 340 horsepower and 332 pound-feet of torque have a way of hiding mass. Paired to a ZF eight-speed, the XE 35t sprints to 60 in a claimed 4.9 seconds. Less brash than the exhaust note in the F-Type, the V6 still emits a medium pitch rasp that never fails to please. Supercharger whine is barely perceptible. Most of what you hear is just the sweet sounds of combustion. 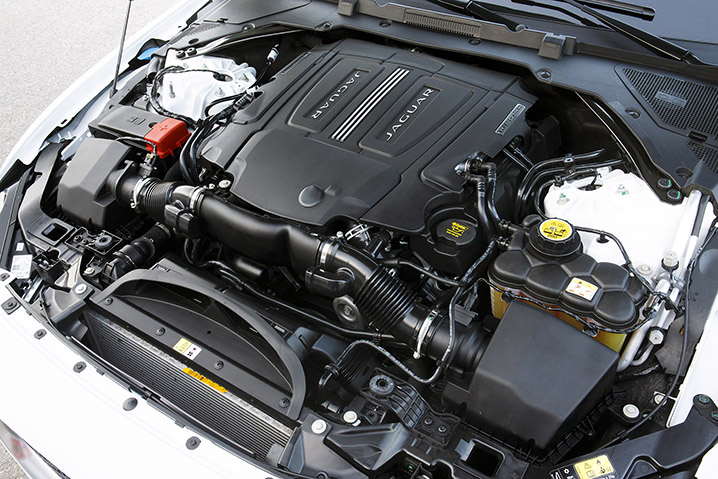 Driving around Rioja, Spain's wine country and at the Circuito de Navarra, the XE's chassis and powertrain are in perfect harmony. Like other Jaguars, the ride is soft and compliant. It only hints at the car's abilities. We joked about the absurdity of driving the XE on the track - lapping sessions on press launches are as cliché as Nürburgring times - only to find out that the baby Jaguar can handle any road course abuse. What's most impressive is the car's balance. Find the limits and you'll see that the edge is like a gentle slope. Understeer is easily managed by the fade-free brakes. Jaguar engineers are so good at ride and handling tuning, we wonder if British bedtime stories are tales of force-displacement curves and spring-damper ratios.

An aside on one other absurdity: Jaguar's naming scheme. The descriptions: 35t, 20d, 25t (the designation for the 2.0-liter gas engine) relate only slighty to horsepower, displacement, or the vague notion of "virtual displacement" conjured up by evil German marketing executives. In any case, this system is no less crazy than numbers on the trunk of other cars. And they line up with the equivalent competition. 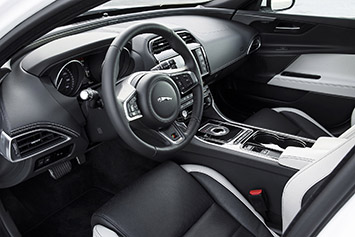 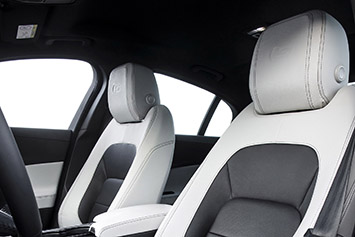 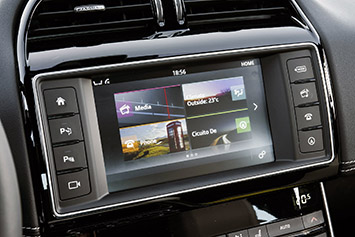 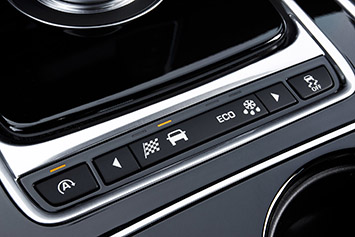 And speaking of badges, the XE sticks them on some handsome bodywork. The car shares common styling themes with the XF and XJ. The goal, said designer Wayne Burgess, was to unify the brand's look across the lineup. In front, the headlights carry the "J-blade" swooping line with the daytime running lamps. Close up, at the border of the headlights and front fender, the styling seems unified with the 3 Series. But the overall look is genuine Jaguar. And if you weren't sure, the name is spelled out on the trunklid below the leaping cat in homage to the E-Type. The rectangular tail lamps house another familiar shape with glowing brake lights that mimic the F-Type's.

Inside, the swooping dash borrows from the XJ with the arc continuing through to the door panels. In the center lies Jaguar's new infotainment system, known as InControl. The good news is that this is a vast improvement from Jaguar's current touchscreen. It's responsive, easy to use, and has hard buttons that shortcut to the main functions. The bad news is that this is still a touchscreen, so it's tough to do anything but basic tasks while driving. Below InControl is the rotary shift knob, with the Jaguar Drive Control settings in a row of buttons to the rear. The system alters the steering, throttle response, transmission setting, and if equipped, adjustable dampers between four settings. Switch from Normal to Dynamic mode and the gauges change their glow from blue to red. At night the ambient lighting shifts as well. 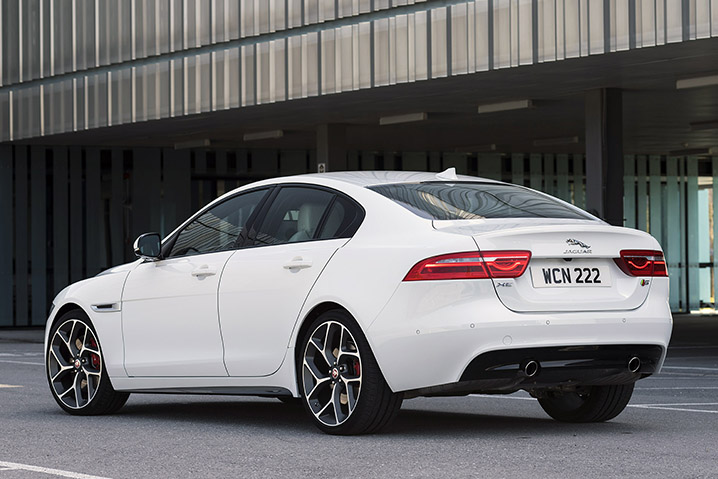 The cabin materials are impressive, with soft leather, a stitched dash, and real metal paddle shifters on the steering wheel. There are a couple of let-downs, like cheap plastic on the top of the steering column and a chintzy feel to the multifunction buttons on the wheel. Still, Jaguar did well to make this a first-class cabin. It doesn't top the materials in the Mercedes-Benz C-Class, but then again the C-Class doesn't drive as well as the XE.

Does the XE have what it takes to put the BMW out of its misery? With sales in the US almost a year away, we've only seen a preview of the XE-versus-the-world feature. But spoiler alert: we're pretty sure the good guy wins this one.