Volkswagen is recalling 20,676 examples of the 2009-2010 Routan minivan to replace their key fobs and ignition switches. This new campaign is linked to one from FCA in March.

In these vehicles, it's possible that if the switch is jarred, the key can be jostled out of the Run position. If this happens, then the engine shuts off, and the airbags, power steering and power brakes are all deactivated, which is a safety problem.

The campaign to fix this issue began last year when FCA recalled 700,000 minivans, and the Routan was also affected because of its shared platform. However, in March 2015 FCA updated its recall to replace the whole ignition switch with an improved design, rather than the original plan of just a new detent ring. With this latest update, the VWs are getting the same fix.

Until the minivans are repaired, VW says that drivers should remove all items from their key ring, including the fob. The recall is expected to begin in April for owners of the 2009 Routan and in August for the 2010 models, according to documents submitted to the National Highway Traffic Safety Administration ( available here as a PDF). Some vehicles already have a new detent ring under the earlier recall, but they still need to be fixed again to get the ignition switch.

SUMMARY:
Volkswagen Group of America, Inc. (Volkswagen) is recalling certain model year 2009 Routan vehicles manufactured June 25, 2008, to June 10, 2009, and 2010 Routan vehicles manufactured October 1, 2009, to August 11, 2010. This defect can affect the safe operation of the airbag system. Until this recall is performed, customers should remove all items from their key rings, leaving only the ignition key. The key fob (if applicable), should also be removed from the key ring. Road conditions or some other jarring event may cause the ignition switch to move out of the run position, turning off the engine.

CONSEQUENCE:
If the ignition key inadvertently moves into the OFF or ACCESSORY position, the engine will turn off, which will then depower various key safety systems including, but not limited to, air bags, power steering, and power braking. Loss of functionality of these systems may increase the risk of crash and/or increase the risk of injury in the event of a crash.

REMEDY:
Volkswagen will notify owners, and dealers will replace the ignition switch and key FOBs, free of charge. The recall is expected to begin in April 2015 for 2009 Routan vehicles, and in August 2015 for 2010 Routan vehicles. Owners may contact Volkswagen customer service at 1-800-822-8987. Volkswagen's number for this recall is 28H1. Note: This recall supersedes recalls 11V151 and 14V396. Vehicles that previously received an ignition switch trim ring as a recall remedy must have their vehicles remedied again under this campaign. Vehicles that have already received a new ignition switch are not covered by this campaign. 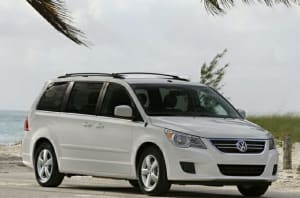