Yes, we tuned into the Formula One Grand Prix in Shanghai China to see a race. But we all know we really tuned in to see if Ferrari, or any other team, could make it a competitive race with Mercedes-AMG Petronas. Based on qualifying, things didn't get off the best of starts: Lewis Hamilton made it four-out-of-four at the front, leading all three Free Practice sessions and then taking pole position in his Mercedes. Nico Rosberg is making the most of his time in the simulator, getting closer to Hamilton as the months go by. This time he lined up in second, just 0.042 in arrears.

Ferrari did its best to temper expectations after Malaysia. Even though Sebastian Vettel qualified in third, almost a second behind Hamilton, the Scuderia's race pace is still considered a danger. Kimi Räikkönen's final hot lap went sour in Turn 3 and dropped the Finn to sixth place on the grid. In between the Ferraris, Williams is another team desperately working to maintain its advantage, and both of its drivers capitalized on Räikkönen's misfortune. Felipe Massa took fourth, Valtteri Bottas was in fifth.

Daniel Ricciardo led the Infiniti Red Bull Racing charge in seventh, ahead of Romain Grosjean in the Lotus earning a spirits-lifting eighth. The two Saubers continue to show how good the Ferrari engine is, with Felipe Nasr taking ninth position and teammate Marcus Ericsson in tenth. 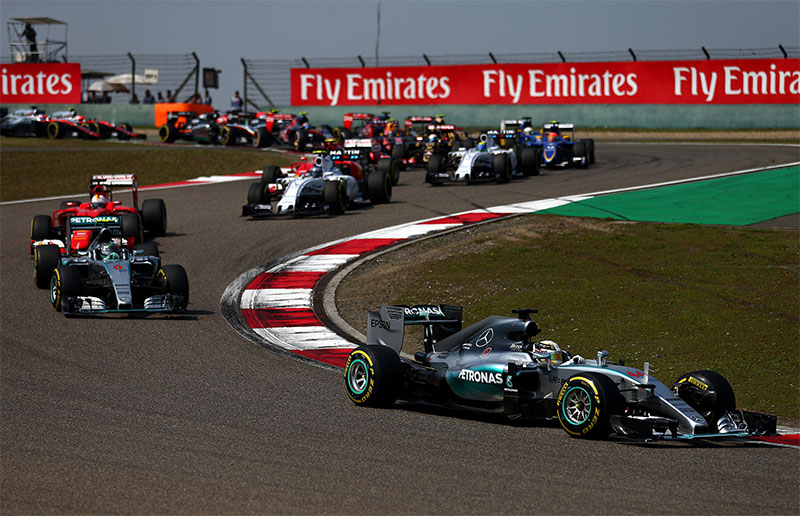 Yet when the lights went out, so did the racing, for the most part. At the end of the first lap, because of some excellent moves by Räikkönen on both Williams' and a terrible start by Ricciardo that dropped him to seventeenth, the order was Hamilton, Rosberg, Vettel, Räikkönen, Massa, Bottas, Grosjean, Nasr, Ericsson, and Pastor Maldonado in the Lotus rounding out the top ten. At the end of the race, the only positions that had changed were the final two: Ricciardo had a laps-long battle with Ericsson, passing, getting repassed, then passing again to take ninth for good, with Ericsson finishing tenth. Maldonado suffered the worst in a battle with Jenson Button in the McLaren, when Button misjudged the entry into Turn 1 for a pass and clouted the back of the Lotus. Button was able to finish but Maldonado had to retire.

Yes, there were some decent moments in between, like Bottas getting by Massa at the start, then Räikkönen getting past Massa in the first few corners and the Finn's move on Bottas also letting Massa through. Räikkönen would make a charge to try to catch up to teammate Vettel 's near the end of the 56-lap race, but that came to naught because of the safety car coming out on Lap 54. 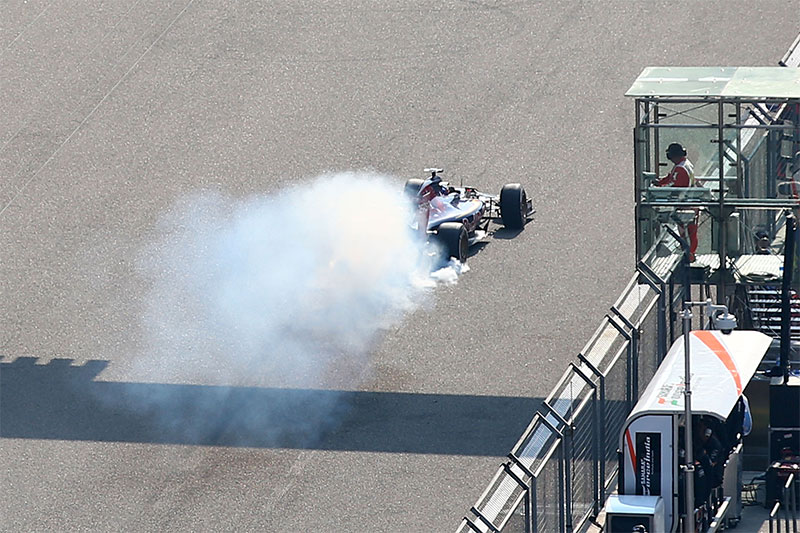 That happened because of the poor Renault luck that befell rookie wunderkind Max Verstappen again – he retired in Australia with a blown engine after some impressive on-track passing, and did the same in China, coming to a halt on the pit straight. That called for the safety car while the marshals played bumper car with the Toro Rosso and the pit wall, and the race finished – only for the fifth time in history – with a bunched-up parade down the front straight. Renault told Red Bull not to expect any race wins this year, but with Ricciardo having to change his engine the morning of the race and Red Bull driver Daniil Kvyat blowing an engine early in the race, Renault should have told both Red Bull teams not to expect anything this year except engine penalties. Red Bull alone has been through a total of six power units so far this year, and we've only finished the third race. The limit before penalties is eight power units. 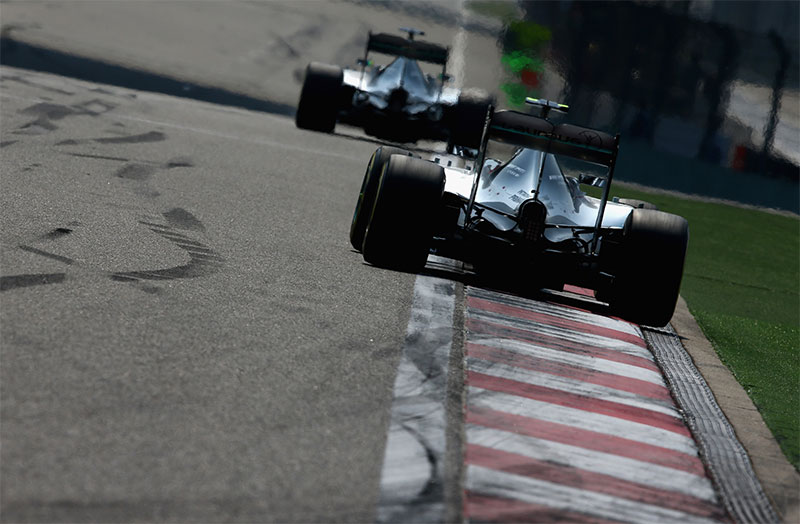 The only other interesting facets of the race happened over the radio. Hamilton, leading the race and on the soft tire, was trying to make his Pirellis last longer than they'd gone all weekend. He slowed down to manage his rubber, and that slowed Rosberg down as the German was also managing his rubber and didn't want to push to pass Hamilton. Rosberg told the team Hamilton was going too slow, the team told him to speed up, which he did, but not quickly enough or fast enough to please Rosberg, who complained afterward that Hamilton compromised his race. Hamilton replied that it wasn't his job to watch out for Nico's race.

That incident also showed that although Ferrari kept Mercedes honest, Vettel never falling more than seven seconds behind, Mercedes rediscovered its whopping advantage on a hot track. When Hamilton sped up before his pit in-laps, his lap time fell by more than a second. Vettel, meanwhile, told his team that he was on the limit. 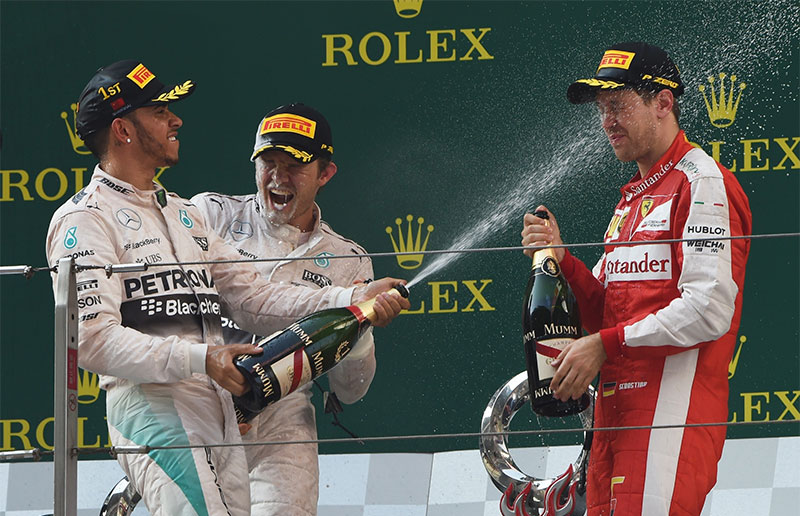 The result gives Hamilton his second Chinese Grand Prix win in a row; he's converted his last nine pole positions into eight wins, this is the 35th win of his career, and he's been on the podium for ten straight races. He leads the Driver's Championship with 68 points, ahead of Vettel with 55 and Rosberg with 51. The Mercedes-AMG Petronas one-two means it has 119 points in the Constructor's Championship, followed by Ferrari with 79, Williams with 48, and Sauber the best of the rest with 19.

We'll have to wait for Bahrain in one week's time to see if the teams can mix it up more on the hot Middle East track. See you then.