Adam Morath
View All Specs
Daily Driver videos are micro-reviews of vehicles in the Autoblog press fleet, reviewed by the staffers that drive them every day. Today's Daily Driver features the 2015 Jeep Wrangler Unlimited X Edition, reviewed by Adam Morath.

Now, undoubtedly, one of the coolest things about this job is that you're in and out of so many different vehicles, but, I'll be honest, there are times where, if you're in very similar vehicles, they can start to run together a little bit. That's why I love getting into a car like this that just snaps you right out of it because it's so unique and so different from anything else on the market. Of course I'm talking about the Jeep Wrangler.

I'm in a 2015 Jeep Wrangler Unlimited. This is the X Edition, which stands for X Games. Jeep is a big title sponsor of the 2015 Aspen X Games and you can see that all over this vehicle. You have white, glossy accent plastic in the interior; mountain graphics throughout the interior and exterior of the vehicle – a nod, obviously, to the winter sports and skiing that you would do out in Aspen. And then in keeping with that mountainous theme, you have an Alpine nine-stereo speaker system. I'll be honest, though, that some of it feels a little overdone to me. For instance, there's a power-bulge in the hood. Credit to Jeep: the vents are actually functional, but this is not the trim I would go for, just personally.

It's one of those vehicles that people are always wondering, "I really like the look of it [and] I like the capability, but could I live with a Wrangler?" It's the same sort of question you'll get from people who are looking at a sports car, "could I actually live with this is my daily driver?" And I have to say, Jeep has come a long way – Wrangler, in particular, has come a long way – in terms of driving comfort. Of course, don't expect "Lexus quiet." You can probably hear it's a big noisy in the cabin. It's a bit of a bumpy ride.

There are things about this vehicle that I could see being annoying in your day-to-day life. For instance, the door: it's essentially an external hinge on the door, but it doesn't stay open for you. So, if you're on any sort of a tilt, the door will come back in and you have to just prop it open with your leg. Little things like that.

That's sort of a story with the Wrangler: the things that make it kind a cool also make it the sort of car that you wouldn't want to live with every day.

You also hear, it's kind of a cliché, but people say it, "it just wants to go fast," for like a sports car. The Wrangler does not want to go fast. I mean, it is happiest at a crawl. It does have a 3.6-liter V6 engine in the Wrangler Unlimited. it's got enough power. I mean, you're not going to have trouble getting up to highway speeds or staying at speed, but you just have to push it a little more – give it a little more throttle input than you might be used to if you're jumping in from a different sort of vehicle.

Of course what makes a Wrangler a Wrangler is it's off-road capability, and this model has it in spades. It's Trail Rated, which means you can take this thing off-road on some of the toughest trails in the country, and because it's a Wrangler Unlimited you've got two extra doors. So, four-door Wrangler. A lot of space in the backseat, or if you fold the seats down you've got tons of cargo room.

The Unlimited X Edition comes in at $37,000. That's $10,000 more than a base Wrangler Unlimited. Now, of course, you can get the standard Wrangler – the two-door model – for cheaper than that as well.

I think for a lot of people there's going to be no other substitute for Wrangler. Maybe there's a Toyota FJ Cruiser. You could go more up-market with a Land Rover and still get a lot of capability, or Range Rover, but really a Wrangler is an American icon. It's fairly affordable and it has stayed true to its offered heritage. 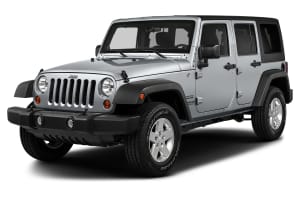